This outstanding mountain landscape, which spans the contemporary national borders of France and Spain, is centred around the peak of Mount Perdu, a calcareous massif that rises to 3,352 m. The site, with a total area of 30,639 ha, includes two of Europe's largest and deepest canyons on the Spanish side and three major cirque walls on the more abrupt northern slopes with France, classic presentations of these geological landforms. The site is also a pastoral landscape reflecting an agricultural way of life that was once widespread in the upland regions of Europe but now survives only in this part of the Pyrénées. Thus it provides exceptional insights into past European society through its landscape of villages, farms, fields, upland pastures and mountain roads. 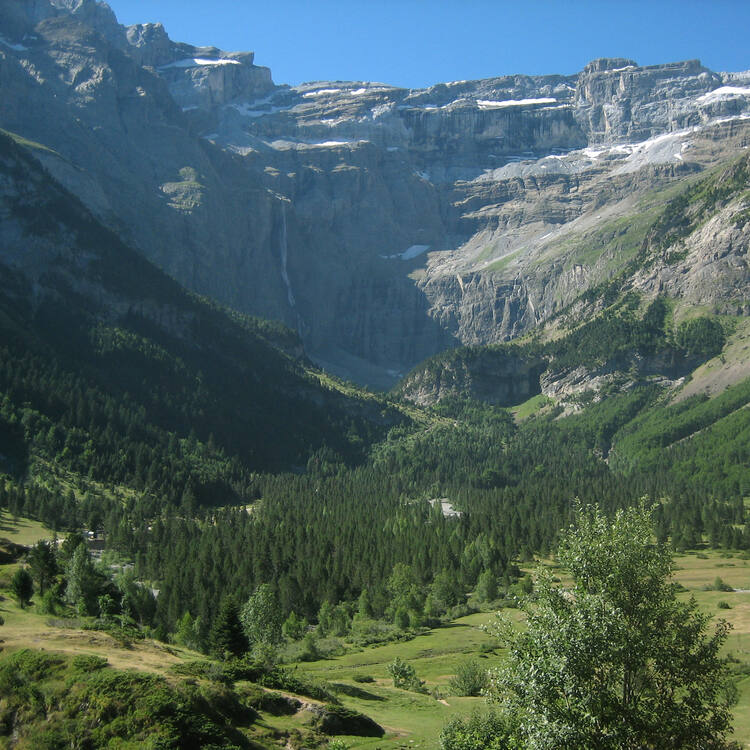 The calcareous massif of the Pyrénées - Mont Perdu, located on the border between France and Spain, is composed of classical geological landforms, notably deeply-incised canyons on the southern Spanish side and spectacular cirque walls on the northern slopes within France. Centred around the peak of Mont Perdu that rises to 3,348 m, covering a total area of 30,639 ha, the property offers an exceptional landscape with meadows, lakes, caves and forests on the mountain slopes. The northern slopes have a humid maritime climate while the southern slopes enjoy a drier Mediterranean climate.

Human settlement in this region dates back to the Upper Paleolithic period (40,000 – 10,000 B.C.) as the sites of the Añisclo and Escuain Caves, the stone circles at Gavarnie and the dolmen at Tella bear witness. Documents from the Middle Ages have recorded these sedentary settlements in history. They were located on the slopes of the massif and neighbouring valleys, formed by the hydrographical river network that irrigated the fields along the valleys in the north, and the trails and roads, bridges, houses and hospices (such as the espitau/hospices of Gavarnie, Boucharo, Aragnouet, Parzan, Héas and Pinet).

These installations were at the centre of an agro-pastoral system based on the movement of livestock, sheep, cows and horses to higher pastures during the summer months, clearly distinct from the use of the land in the neighbouring plains. The Mont-Perdu valleys and their passes served as links between the two communities, that had more in common with each other than with their respective communities in the plains. Consequently, the legal and political system specific to the region, established long ago, has a long history of independence from central governments.

The exploitation of high pastures such as those of Gaulis or Ossoue are an invaluable testimony to this transhumance system. This is one of the rare places in Europe where transhumance has been maintained over the centuries. By ancestral agreements, Spanish farmers also graze their herds on the French side. This practice strengthens the transboundary nature of the World Heritage property.

Criterion (iii): The pastures and meadows of the Pyrénées – Mont Perdu, with their villages and trails that link them, are a remarkable witness of a very rare transhumance system in Europe, still practised by seven communities that mainly live adjacent to the property.

Criterion (iv): The high valleys and the calcareous summits of the Pyrénées – Mont Perdu are an outstanding example of a landscape shaped by a pastoral transhumance system that was developed in the Middle Ages and still exists today.

Criterion (v): The model of the habitat of the Pyrénées – Mont Perdu with its villages, fields and meadows, as the basis of a seasonal migration of men and animals to the high pastures during the summer season, is an outstanding example of a type of transhumance that was once widespread in the mountainous regions of Europe, but which today is rare.

Criterion (vii): The property is an exceptional landscape with meadows, lakes, caves, mountains and forests. In addition, the region is of great interest for science and conservation, possessing a panoply of geological, panoramic, faunistic and floristic elements that make it one of the most important Alpine protected areas in Europe.

Criterion (viii): The calcareous massif of Mont Perdu presents a series of classic geological landforms such as the deeply-incised canyons and spectacular cirques. The region is distinguished by its location at the tectonic collision point between the Iberian and west European plates. The property presents an exceptional geological unity, forming a calcareous massif withMont Perdu at its centre. The resulting landscape is considerably different on the northern slopes (France) and the southern slopes (Spain).

With regard to human impact, the Pyrénées are part of the Europeran continent inhabited by humans for thousands of years and within which very few regions still retain their natural integrity. Despite the occurrence of numerous changes over the centuries, development has not affected the geology of the site, nor its topography, while the transformation of the biological environment has remained harmonious. A great part of the region, in particular the Spanish side, has undergone little change. On the French slopes pastoral and forestry activities still remain. Transhumance continues in the region with frequent movements of the herds from one side of the Franco-Spanish border to the other. Numerous development projects (railway lines, high-tension power lines, ski slopes) have been rejected over the decades, and hunting was prohibited in the Spanish national parks in 1918 and in 1967 in France.

The boundaries of the listed World Heritage property were fixed in accordance with the unity of the landscape including the calcareous massif of Mont Perdu as the focal point rather than the administrative limits of the protected areas of each country, which could entail some difficulties with regard to the management and enhancement of the site. An extension to the property concerning a small part of the French territory, mainly for cultural criteria, was adopted in 1999.

The authenticity of the property is overall very high in terms of two very closely linked attributes: its use and its appearance. If the use is more significant in terms of “cultural landscape”, the physical aspect is capital in distinguishing the particular region of the Pyrénées. The landscape has retained its authenticity in a remarkable manner: the dominant natural elements (geology, altitude and climate) and the regular grazing practise limit the flora so that the mountainous landscape is completely denuded of trees and bushes, particularly above an altitude of 2,000 m. The breeders continue to ensure an extensive pastoralism in perfect accord with the traditional life style of the central Pyrénées.

The site constitutes a precious testimony to former mountain society, through its landscapes and villages, farms, fields, high mountain pastures and trails. The agro-pastoral landscape of today reflects the history of the site. The quality of the property remains unaltered since its inscription.

On the Spanish side, the “Plan Rector de Uso y de Gestión” or Management Plan for the Ordesa y Monte Perdido National Park is updated periodically, as is the ”Plan Director of the Red de Parques Nacionales” (Master Plan for the  National Parks Network).

The Spanish part of the site corresponds approximately to two-thirds of the World Heritage site, and coincides with the boundaries of the Parque Nacional de Ordesa y Monte Perdido that was created in 1918 and extended in 1982, as well as its buffer zone, providing the highest degree of conservation possible for both natural and human heritage. The Parque Nacional de Ordesa y Monte Perdido is included in the Natura 2000 Network, comprising networks of Protection Areas for Birds and Sites of Community Interest. Furthermore, it is a Biosphere Reserve Site and Geoparc holder of a European diploma delivered by the European Council and attributed without interruption since 1988. It is part of the network of Natural Areas of Aragon and the Network of Spanish National Parks. There are eight pastoral roads or vías pecuarias protected as heritage by national and regional laws. Plans for the conservation of two threatened species are implemented (Gypaetus barbatus and Cypripendium calceolus). Park staff are responsible for different tasks such as patrolling, information, maintenance, clearing and administrative management.

Monitoring of the property is based on various scientific studies, including the implementation of research projects linked to national parks, the creation of a special research unit for environmental surveillance of the different habitats of the National Park, quality control through surveys addressed to both visitors and local inhabitants, and the establishment of a cultural heritage inventory, like the mallatas (traditional shepherd huts).

On the French side, a large part of the property (60%) is located in the core zone of the Pyrénées National Park, whichbenefits from specific protection, the remainder being covered by the optimal adhesion area of the Park. The National Park exercises a management and protection mission for environmental heritage and raising public awareness. Framework documents for the management of this area are available.

The property is also covered by a complex of zones of the Natura 2000 Network, which has as its objective biodiversity conservation conciliating the demands of natural habitats and species with economic, social and cultural activities being carried out in the territories. For example, the Natura 2000 site “Estaubé, Gavarnie, Troumouse, Barroude” allows for concerted and assumed management by all the stakeholders concerned in the natural areas.

On the French side the site is also the subject of various regulations that govern the territory concerned (known in France as the 2 May 1930 Law on listed sites, and today codified in the Environment Code).

Currently, the site presents the highest degree of biodiversity conservation in respect of European standards in force.

The Charter of Cooperation (2010-2020) between the two parks and the establishment of the Transboundary Technical Committee to prepare a programme of activities eligible for European funding in the framework of the Interreg IV Programme (POCTEFA) are likely to improve the management of the site.

Since the inscription of the site, several points require clarification, such as the strengthening of transboundary cooperation, the misuse of some areas of the site, tourism practices, improvement of transport systems, the low level of awareness raising and education on the values of the site, and support for the traditional life style. To assist the local population and improve its level of living standards, grants are accorded annually by the government of the Aragon Region and the Spanish State to sustainable development projects conducted by individuals, local groups, family enterprises, municipalities or NGOs.

The French State also invests in this type of action encouraging recognition of the Outstanding Universal Value of Pyrénées – Mont Perdu by the local populations. This appropriation, respectful of the protection of the Outstanding Universal Value and of all of the characteristics of the property, is the sole guarantee of sustainable involvement in the preservation and promotion of the site, of course with the understanding that the physical integrity and authenticity of the site will not be affected.

Pastoralism and its cultural values are supported through important financial assistance from the French and Spanish Statesas well as European funds: support for work (rehabilitation of pastoral huts, paths, cattle grids, watering places), direct aid and grants to breeders practising transhumance. Breeding is further encouraged through the use of helicopters by the French and Spanish administrations to enable transport (salt, construction material, first aid equipment) to places of difficult access.

Although the survival of transhumance is dictated by international meat market prices and by grants originating from the common agricultural policy, the two States support and will continue to support the transhumant breeding sector in the Pyrénées – Mont Perdu site.