Kalwaria Zebrzydowska is a breathtaking cultural landscape of great spiritual significance. Its natural setting – in which a series of symbolic places of worship relating to the Passion of Jesus Christ and the life of the Virgin Mary was laid out at the beginning of the 17th century – has remained virtually unchanged. It is still today a place of pilgrimage. 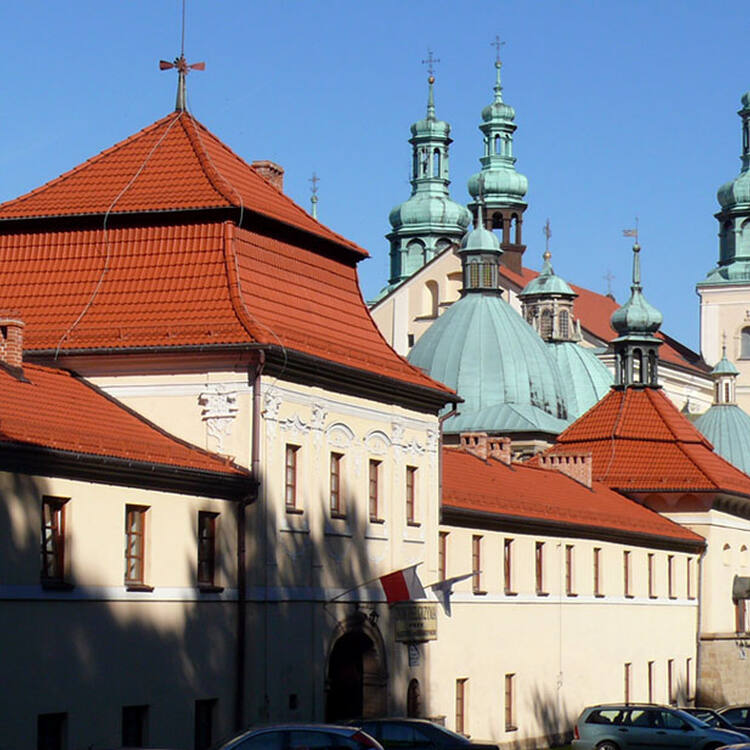 Kalwaria Zebrzydowska: the Mannerist Architectural and Park Landscape Complex and Pilgrimage Park, which dates back to the first half of the 17th century, is a cultural landscape located south of Kraków that covers an area of the Żar and Lanckorońska hills. This extraordinary testimony of piety and culture was the first of the large-scale Calvaries built in Poland, and it became a model for numerous later projects. It is notable among European Calvaries for its distinctive architectural features, for the skilful amalgamation of religious devotion and nature, and for the uninterrupted tradition of the mysteries enacted here. The sanctuary, devoted to the veneration of the Passion and to Marian worship, is an outstanding example of Calvary shrines in the Counter-Reformation period, which contributed to the growth of piety in the form of pilgrimages. The pilgrimage park, a garden of prayer, is closely related to the themes of Christ’s Passion and the life of the Virgin Mary.

The creator and founder of Kalwaria Zebrzydowska was Mikołaj Zebrzydowski, the Voivode of Kraków and starost of Lanckorona, who commissioned Felix Żebrowski, the distinguished mathematician, astronomer, and surveyor, to create a copy of Jerusalem as it was believed to exist at the time of Christ. He used a system of measurement that he developed to blend it into the local natural landscape and topography. The terrain’s natural features were cleverly utilised, topographic elements being given names referring to the landscape of the Holy City (e.g. Cedron Valley, the Mount of Olives, Golgotha) and complementary architectural structures being connected by paths and three-lined alleys that symbolise the ancient routes raised on them. The characteristics of Italian Renaissance and French Baroque garden and park design were blended with Mannerist freedom and irregularity. There are numerous vistas between different elements of the composition, as well as a series of magnificent panoramas not only of the park itself, but also of the Tatra Mountains and the City of Kraków.

The complex consists of a monastery as well as a number of churches, chapels, and other architectural structures. The most notable for representing the highest artistic values of Mannerism were built in the years 1605–1632, of which the first 14 chapels were designed by Paul Baudarth. The others had been built successively from the 17th until the beginning of the 20th century. Pathways connecting the architectural features were originally created by cutting wide trails through a dense forest stand. The landscape gradually became more open due to forest clearance, hence in the late 18th century, in order to permanently demarcate these paths in their original layout, they were lined with trees, enriching the spatial composition of the Calvary.

The park’s architecture and landscape provide the setting for enacting the mysteries of the Way of the Cross and for celebrating the feast of the Assumption of the Blessed Virgin Mary. These events have been held here regularly since the early 17th century, for over 400 years, and are attended by thousands of pilgrims and tourists.

Criterion (ii): Kalwaria Zebrzydowska is an exceptional cultural monument in which the natural landscape was used as the setting for a symbolic representation (in the form of chapels and paths) of the events of the Passion of Christ. The result is a cultural landscape of great beauty and spiritual quality in which natural and human-made elements combine in a harmonious manner.

Criterion (iv): The Counter-Reformation of the late 16th century led to a flowering in the creation of Calvaries in Europe. Kalwaria Zebrzydowska is an outstanding example of this type of large-scale landscape design, which incorporates natural beauty with spiritual objectives and the principles of Baroque park design.

All the elements that sustain the Outstanding Universal Value of Kalwaria Zebrzydowska: the Mannerist Architectural and Park Landscape Complex and Pilgrimage Park are located within the boundaries of the 380-ha property, which is surrounded by a 2,600-ha buffer zone. These include the entire area of the designed landscape of Kalwaria Zebrzydowska (the original layout of which remains fully discernible), along with all of its architectural features and the paths and avenues that connect them.

Pressures exerted by the building and investment activities of individual landowners located within the boundaries of the property, as well as civilizational changes, generate a series of problems and threats to the layout and perception of this cultural landscape.

The property has retained its overall authenticity as a designed cultural landscape in terms of its location and setting, forms and designs, materials and substances, and function. Its original layout has survived virtually intact, and the topographic and symbolic relationships between the natural and built features have been maintained. Individual architectural features survive in their original locations and forms.

Conservation measures have been carried out with care and respect for the overall concept of the Calvary as a pilgrimage park. The property continues to serve its original purpose as a pilgrim shrine to this day, representing an uninterrupted continuity of tradition spanning four centuries. Pilgrimages and Calvary mysteries rooted in the tradition of the early 17th century constitute a living and authentic contemporary means of using this historic cultural landscape.

The property is subject to the highest level of legal protection in Poland at the national level under the provisions of heritage protection (through its entry in the National Heritage Register, and Monument of History status), nature conservation, and spatial planning laws. The system of legal protection is complemented by local government rulings recorded in local planning legislation regarding spatial development, adopted after prior public consultations.

Guardianship and management of the sacred part of the complex, with its churches, chapels, pilgrimage paths, and some forest areas, are the responsibility of its owner, the Order of Friars Minor. The remaining area of the property – the cultural landscape of forests and the agricultural and residential plots – has a complex ownership structure. Renovation and conservation interventions require prior approval of the planned procedures and a relevant permit from the regional conservation services. Monitoring of the condition of the architectural fabric and the landscaped spaces has been carried out systematically for years. Some of the sanctuary’s structures are monitored constantly to combat the risks of fire, theft, and vandalism.

Due to the fact that a significant part of the sacred complex’s surroundings is owned by individual persons, it is essential to build local awareness and responsibility for the cultural heritage of the property, particularly as related to building and investment activities located within the boundaries of the property. Cooperation is an essential factor in ensuring the protection and peaceful coexistence of the sacred complex, visited by millions of pilgrims, with the secular local community.

In addition, a holistic approach to the protection of the Calvary’s cultural landscape is necessary, as is the integration of conservation activities with the general management of the entire area of the property and its buffer zone. Systematic conservation work and constant monitoring of the condition of individual elements of the spatial layout, and their mutual relationships, are important components of these activities. A regularly revised and updated Management Plan for this World Heritage property, with clearly defined areas of responsibility and rules of cooperation, is required to achieve these objectives and tasks. 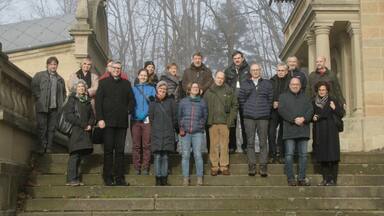