The property is located on the northern edge of the semi-arid Great Plains of North America, on the border between Canada and the United States of America. The Milk River Valley dominates the topography of this cultural landscape, which is characterized by a concentration of pillars or hoodoos – columns of rock sculpted by erosion into spectacular shapes. The Blackfoot Confederacy (Siksikáíítsitapi) left engravings and paintings on the sandstone walls of the Milk River Valley, bearing testimony to messages from Sacred Beings. Dated in situ archaeological remains cover a period between ca. 4,500 BP - 3,500 years BP and the Contact Period. This landscape is considered sacred to the Blackfoot people, and their centuries-old traditions are perpetuated through ceremonies and in enduring respect for the places. 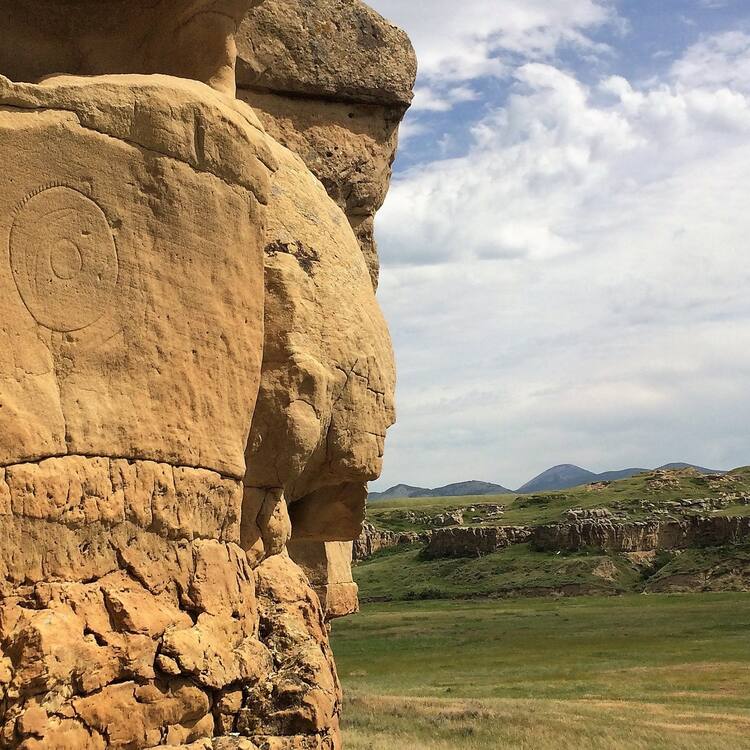 Writing-on-Stone / Áísínai'pi is a sacred site in a mixed grassland prairie region on the northern edge of the Great Plains. The Milk River Valley and several “coulees” dominate the topography of this cultural landscape, whose geological features include a concentration of hoodoos, with spectacular forms sculpted by erosion. The Blackfoot Confederacy (Siksikáítsitapi) has left engravings and paintings on the sandstone walls and landscape features, which bear witness to spirit messages. The landscape is considered to be sacred by the Blackfoot people, and centuries-old traditions are perpetuated today in various ceremonies and in the respect in which the place is held.

The property consists of three components - the main component Áísínai’pi, and some 10 km away Haffner Coulee and Poverty Rock - and contains thousands of rock art images. Dated in situ archaeological remains cover a period between ca. 4,500 BP -3,500 years BP and the Contact Period. The rock art has been made in the valley for thousands of years, with most of the images dating to the later Pre-contact and early Post-contact periods (1,000 years BP to the mid- nineteenth century), with the oldest art possibly dating up to ca. 3,000 years BP.

Criterion (iii): The sacred landscape and the rock art of Writing-on-Stone / Áísínai’pi provide exceptional testimony to the living cultural traditions of the Blackfoot people. According to Blackfoot beliefs, spiritual powers inhabit the earth, and the characteristics of the landscape and the rock art in the property reflect tangible, profound and permanent links with this tradition. The viewsheds of the sacred valley, with high grassland prairies, also contribute to its sacred character and influence traditional cultural practices.

All the elements that are necessary to express Outstanding Universal Value are contained within the property boundaries, including a comprehensive representation of culturally significant landforms, a full range of characteristics of the two main documented traditions of rock art at Writing-on-Stone / Áísínai'pi, and the viewsheds that contribute to their sacred character. The tangible and intangible attributes of Writing-on-Stone / Áísínai'pi continue to be incorporated in the cultural and spiritual context of the Blackfoot people today. The rodeo grounds, located in the heart of the restricted access zone or archaeology reserve, should be removed and relocated in order to strengthen the property’s integrity.

The authenticity of the form and conception of the property, of materials and substance, of situation and setting, of use and function, of traditions, of spirit and impression is well established, and is corroborated by large amounts of traditional, ethnographic and archaeological evidence. The authenticity of the form and conception of the rock art is evidenced by its subject, its formal and stylistic qualities, and its pictorial conventions and motifs, which correspond to well documented traditions of the indigenous peoples. The character of the landscape is intact and authentic, and has undergone few modifications since the beginning of European settlement. The archaeological excavations and the inventories have demonstrated the early date of settlement and use of the property by the indigenous peoples. The continuing traditional importance and ceremonial use of the property by the Blackfoot people bear witness to the authenticity of its intangible values, its situation and its setting.

Writing-on-Stone / Áísínai'pi is entirely protected and managed by virtue of the provisions of the Provincial Parks Act of Alberta. The three components of the serial property and the associated buffer zones are included in the provincial park of Writing-on-Stone. Industrial and commercial development inside the property is prohibited. More than 21% of the property is located in a restricted access zone, preventing unauthorised public access to the zones that are most sensitive in cultural terms, although the Blackfoot people are still allowed access for traditional purposes. All the property’s cultural attributes are subject to the protection provisions of the Historical Resources Act of Alberta, the highest level of protection in this Canadian jurisdiction.

A comprehensive management system is in place, and a programme for monitoring the rock art has been implemented. The Blackfoot people are fully participating in the management of Writing-on-Stone / Áísínai'pi, while ensuring appropriate management practices and continuous access for traditional and cultural practices. The management plan is regularly revised, and a new edition, drawn up in collaboration with the Blackfoot communities, is nearing completion. The Interim Management Directive will be used until the final stage of the public consultation has been completed, and the revised management plan has been adopted.