Huangshan, known as 'the loveliest mountain of China', was acclaimed through art and literature during a good part of Chinese history (e.g. the Shanshui 'mountain and water' style of the mid-16th century). Today it holds the same fascination for visitors, poets, painters and photographers who come on pilgrimage to the site, which is renowned for its magnificent scenery made up of many granite peaks and rocks emerging out of a sea of clouds. 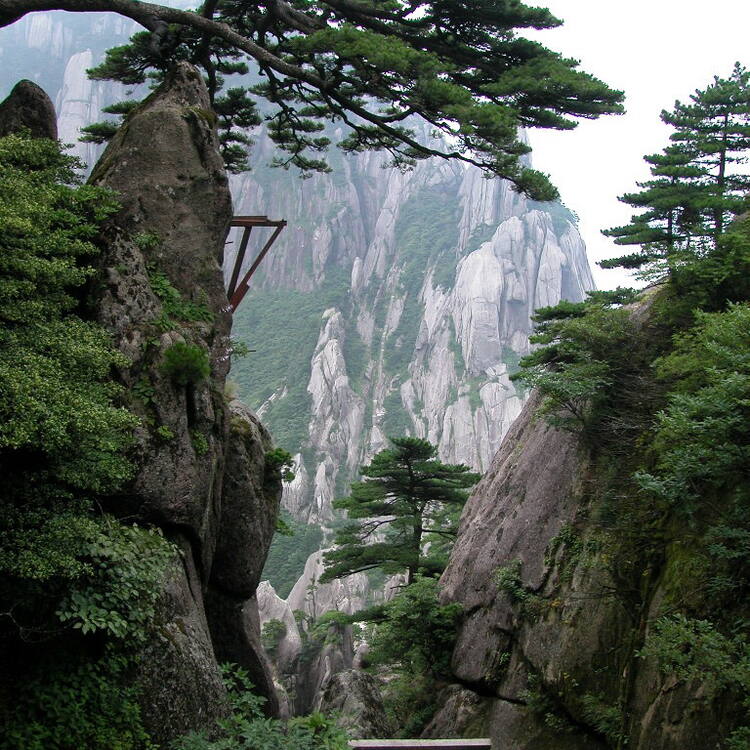 Mount Huangshan, often described as the “loveliest mountain of China”, has played an important role in the history of art and literature in China since the Tang Dynasty around the 8th century, when a legend dated from the year 747 described the mountain as the place of discovery of the long-sought elixir of immortality.  This legend gave Mount Huangshan its name and assured its place in Chinese history.  Mount Huangshan became a magnet for hermits, poets and landscape artists, fascinated by its dramatic mountainous landscape consisting of numerous granitic peaks, many over 1,000 m high, emerging through a perpetual  sea of clouds.  During the Ming Dynasty from around the 16th century, this landscape and its numerous grotesquely-shaped rocks and ancient, gnarled trees inspired the influential Shanshui (“Mountain and Water”) school of landscape painting, providing a fundamental representation of the oriental landscape in the world’s imagination and art.

The property, located in the humid subtropical monsoon climate zone of China’s Anhui Province and covering an area of 16,060 ha with a buffer zone of 49,000 ha, is also of outstanding importance for its botanical richness and for the conservation of a number of locally or nationally endemic plant species, some of which are threatened with extinction.

Criterion (ii): The cultural value of Mount Huangshan’s scenic landscape first entered the Chinese imagination in the Tang Dynasty and has been held in high esteem ever since.  The mountain was named Huangshan (Yellow Mountain) by imperial order in the year 747 and from that time on attracted many visitors, including hermits, poets and painters, all of whom eulogized the mountain’s inspirational scenery through painting and poetry, creating a rich body of art and literature of global significance. During the Yuan Dynasty (1271-1368), 64 temples were constructed on the mountain. In 1606, the monk Pumen came to Huangshan and built the Fahai Meditation Temple.  By the Ming Dynasty (around the16th century), depictions of Mount Huangshan had become a favourite theme of Chinese landscape painters, establishing the influential Shanshui (“Mountain and Water”) school of landscape painting. Showcasing the interaction of man and nature in this highly scenic setting has inspired generations of Chinese artists and writers.

Criterion (vii): Mount Huangshan is renowned for its magnificent natural scenery which includes massive granitic boulders and ancient pine trees which are often further enhanced by cloud and mist effects.  This dramatic landscape includes formations of natural stone pillars, grotesquely-shaped rocks, waterfalls, caves, lakes and hot springs, formed by its complex geological history.  The property features numerous imposing peaks, 77 of which exceed an altitude of 1,000 m, with the highest, the famous Lianhua Peak (Lotus Flower Peak), reaching up to 1,864 m.

Criterion (x): Mount Huangshan provides the habitat for a number of locally or nationally endemic plant species, several of which are globally threatened. Its outstandingly rich flora contains one-third of China's bryophytes (mosses and liverworts) and over half of its pteridophytes (ferns).  Species endemic to Huangshan include 13 species of pteridophytes and 6 species of higher plants, with many other species endemic to the region or to China. This exceptional flora is complemented by an important vertebrate fauna of over 300 species, including 48 mammal species, 170 birds, 38 reptiles, 20 amphibians and 24 fish. A total of 13 species are under state protection, including the Clouded Leopard Neofelis nebulosa (VU) and the Oriental Stork Ciconia boyciana (EN).

All the elements that embody the values of Mount Huangshan are present within the boundaries of the inscribed property and its designated buffer zone.  It is a highly scenic natural area showing good evidence of glaciation, and composed of numerous imposing peaks, grotesquely-shaped rocks, waterfalls, caves, lakes, and hot springs, all of which are well-protected.  The ancient temples (of which there are the remains of more than 20), the rock inscriptions and the pathways to them and to scenic viewpoints are also intact and well-maintained.  Some 1,600 people live within the area, most of whom are staff and their dependants. A policy is in force to reduce these numbers as well as the accompanying buildings as opportunities arise.

The imposing scenery of Mount Huangshan has inspired some of the most outstanding creations of Chinese painting and poetry, as well as of temple architecture.  A legend from the Tang Dynasty dated from the year 747 describes the mountain as the place of discovery of the long-sought elixir of immortality.  This gave to Mount Huangshan its name and assured its place in Chinese history.  Mount Huangshan became a magnet for hermits, poets and landscape artists, fascinated by the landscape of mountains emerging from a sea of clouds.  During the Ming Dynasty (from around the16th century) this landscape inspired the Shanshui (“Mountain and Water”) school of painting, whose masters included the artists Jian Jiang, Zha Shibiao, Mei Oing, Xugu, and Xue Zhuang.  The most famous of all was Shi Tao whose essay “Comments on the paintings of the monk Bitter Pumpkin” is one of the most renowned works of Chinese literature.  It is from these works of art and literature that the authenticity of Mount Huangshan can best be understood; the place of inspiration for some of the world’s greatest cultural achievements.

Mount Huangshan World Heritage property is a National Park protected under the laws of China.  These include:  the Law on the Protection of Cultural Relics (1982), the Forestry Law (1982), the Law on the Management of Scenic and Historic Interest Areas (1985), and the Law on the Protection of Wildlife (1988).  Protection, conservation and management of the property have been strengthened by the establishment of the Management Committee of Huangshan National Park directly under the authority of Huangshan Municipality. A special fund has been set up to assure adequate financial resources are available to monitor and manage the property to the highest international standards.

A Master Plan for the property is currently under implementation. Objectives of this plan are to balance conservation of the property with tourism promotion, to ensure the safeguarding of the scenic area within a framework of sustainable development for the local community, and to raise conservation management standards by “digitizing, systematizing, refining, and humanizing” the property’s management regime, in order to preserve effectively the artistic, cultural and environmental heritage value of Mount Huangshan.

The pressure of visitors is the most obvious factor affecting the property. Mount Huangshan is one of the most popular scenic landscapes in China, with annual visitation at 2.74 million and increasing at 8.96% per annum. Visitor numbers need to be stabilised. Other threats to the property include pine wood nematode pests; storm damage to trees, landslides, and dams; negligent acts by tourists (i.e. smoking, littering); and water shortages which increase fire hazards. 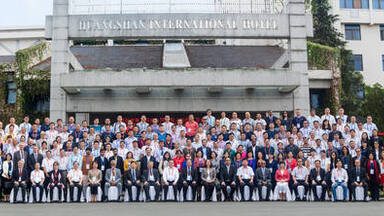 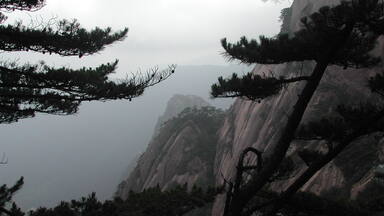