Located in the historic centre of Isfahan, the Masjed-e Jāmé (‘Friday mosque’) can be seen as a stunning illustration of the evolution of mosque architecture over twelve centuries, starting in ad 841. It is the oldest preserved edifice of its type in Iran and a prototype for later mosque designs throughout Central Asia. The complex, covering more than 20,000 m2, is also the first Islamic building that adapted the four-courtyard layout of Sassanid palaces to Islamic religious architecture. Its double-shelled ribbed domes represent an architectural innovation that inspired builders throughout the region. The site also features remarkable decorative details representative of stylistic developments over more than a thousand years of Islamic art. 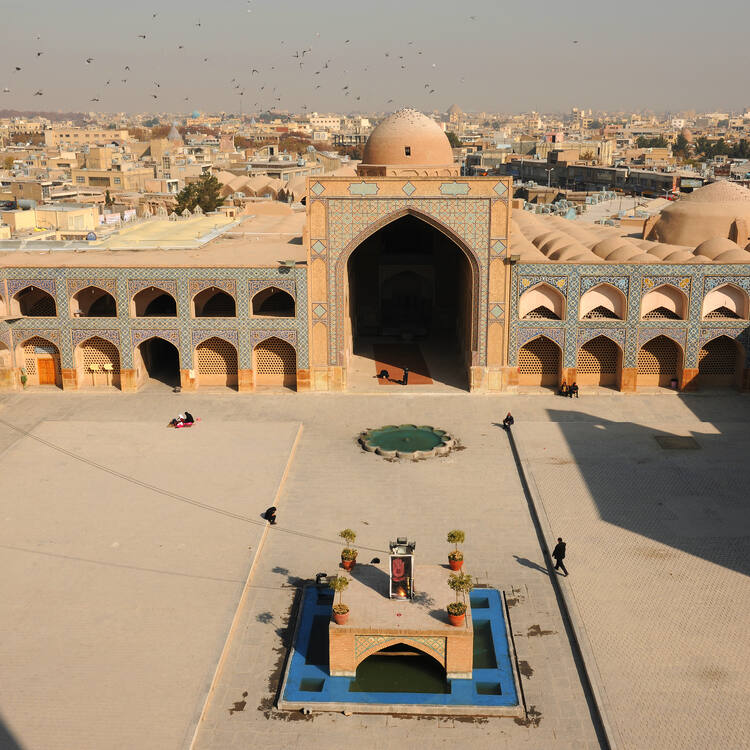 Northern façade and northern eyvan of the mosque © MJIB

Masjed-e Jāme’ is the oldest Friday (congregational) mosque in Iran, located in the historical centre of Isfahan. The monument illustrates a sequence of architectural construction and decorative styles of different periods in Iranian Islamic architecture, covering 12 centuries, most predominantly the Abbasid, Buyid, Seljuq, Ilkhanid, Muzzafarid, Timurid and Safavid eras. Following its Seljuq expansion and the characteristic introduction of the four iwans (Chahar Ayvān) around the courtyard as well as two extraordinary domes, the mosque became the prototype of a distinctive Islamic architectural style.

The prototype character is well illustrated in the earliest double-shell ribbed Nezam al-Molk dome, the first use of the four iwan (Chahar Ayvān) typology in Islamic architecture, as well as the textbook character of the Masjed-e Jāme’ as a compilation of Islamic architectural styles. The Masjed-e Jāme’ of Isfahan is an outstanding example of innovation in architectural adaptation and technology applied during the restoration and expansion of an earlier mosque complex during the Seljuq era, which has been further enlarged during later Islamic periods by addition of high quality extensions and decoration.

Criterion (ii): Masjed-e Jāme is the first Islamic building that adapted the four iwan (Chahar Ayvān) courtyard layout of Sassanid palaces to Islamic religious architecture and thereby became the prototype construction for a new layout and aesthetic in mosque design. The Nezam al-Molk Dome is the first double-shell ribbed dome structure in the Islamic empire, which introduced new engineering skills, allowing for more elaborate dome constructions in later mosque and burial complexes. On the basis of these two elements, the Masjed-e Jāme is a recognized prototype for mosque design, layout and dome construction, which was referenced in several later eras and regions of the Islamic world.

The Masjed-e Jāme’ contains a continuous sequence of Islamic architectural styles, the most prominent of which date from the Seljuq period. The remains from the Seljuq era, especially the key elements of the ground plan, the four iwans, and the two domes are sufficient to illustrate the advances in mosque and dome architecture made at the time. The boundaries of the property are adequate to encompass the entire mosque complex with all its extensions and significant functions over time. However, the integrity of the property is highly vulnerable to development projects in its vicinity. For this reason, any project proposed should be carefully assessed on the basis of comprehensive Heritage Impact Assessments and respect the historic setting and urban proportions around the Masjed-e Jāme’.

Most elements of the mosque, in particular the four iwans and the Malek al-Molk and Taj al-Molk domes, are authentic in material, design and location. Restorations and a reconstruction, which became necessary following an air raid in 1984, were carried out to an adequate standard, using traditional craftsmanship and materials. One of the most important aspects of authenticity is the function of the Masjed-e Jāme’ of Isfahan, both as a mosque, which continues to be used for prayers, and as a component of the Isfahan historic bazaar fabric. Attached to and accessed from the street network of the bazaar area, the mosque has a significant setting, the authenticity of which is highly vulnerable to changes in urban character. To respect the authenticity of spirit and feeling, the museum function of Masjed-e Jāme’ has to remain sensitive to its religious use, both in terms of information panel design and visitor numbers.

Masjed-e Jāme’ of Isfahan is designated as a national monument (no. 95 of 1932) following article 83 of the Constitution Law of the Islamic Republic of Iran (1920). Likewise its buffer zone is protected by regulations set up by the Iranian Cultural Heritage, handicraft and Tourism Organization (ICHHTO), following a cabinet decision adopted in 2001, which stipulates that buffer zones fall under national law. Yet, it is essential that the designated property and buffer zone is integrated in the zoning bylaws and the Isfahan urban master plan, as well as a continuous cooperation between the ICHHTO and the responsible municipal authorities is established.

The management of the property is coordinated by three bodies, a Steering Committee, a Technical Committee and the site management office. The Steering Committee consist of representatives of the ICHHTO, the Vaqf authorities, the governor and mayor of Isfahan, as well as reputable experts, and it is responsible for supervising the protection and conservation of the site. The Technical Committee has the authority to review and approve detailed project plans and schedules of activities and monitors work progress at regular intervals. The site management office is responsible for the day-to-day coordination and supervision of activities. At the time of inscription it is located in the vicinity of the Masjed-e Jāme’ but is in the process of moving into a permanent base in the mosque complex.

An integrated conservation and management plan for the property, which includes sections on sensitive visitor management and risk-preparedness strategies, should be developed and adopted with high priority. 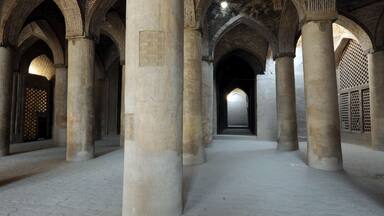