The Chhatrapati Shivaji Terminus, formerly known as Victoria Terminus Station, in Mumbai, is an outstanding example of Victorian Gothic Revival architecture in India, blended with themes deriving from Indian traditional architecture. The building, designed by the British architect F. W. Stevens, became the symbol of Bombay as the ‘Gothic City’ and the major international mercantile port of India. The terminal was built over 10 years, starting in 1878, according to a High Victorian Gothic design based on late medieval Italian models. Its remarkable stone dome, turrets, pointed arches and eccentric ground plan are close to traditional Indian palace architecture. It is an outstanding example of the meeting of two cultures, as British architects worked with Indian craftsmen to include Indian architectural tradition and idioms thus forging a new style unique to Bombay. 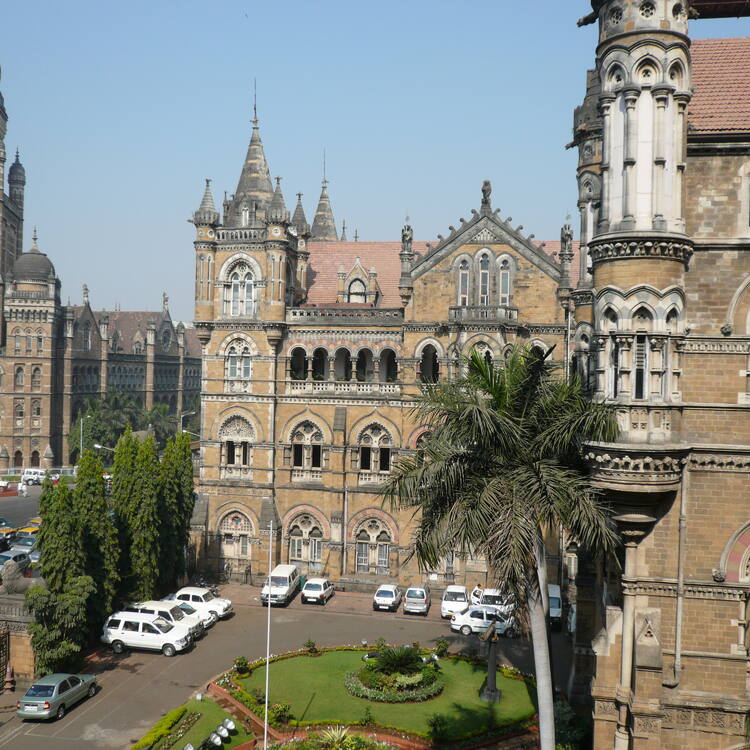 The Chhatrapati Shivaji Terminus (formerly Victoria Terminus) is located in Mumbai on the Western Part of India touching the shores of the Arabian Sea. This building, designed by F. W. Stevens, is spread across a 2.85 hectare area. The terminal was built over a period of 10 years starting in 1878. This is one of the finest functional Railway Station buildings of the world and is used by more than three million commuters daily. This property is an outstanding example of Victorian Gothic Architectural Revival in India, blended with the themes derived from Indian Traditional Architecture. Its remarkable stone dome, turrets, pointed arches and eccentric ground plan are close to traditional Indian palace architecture. It is an outstanding example of the fusion of two cultures, as British architects worked with Indian craftsmen to include Indian architectural tradition and idioms thus forging a new style unique to Mumbai. This was the first terminus station in the subcontinent. It became a commercial palace representing the economic wealth of the nation.

Criterion (ii): Chhatrapati Shivaji Terminus (formerly Victoria Terminus) of Mumbai (formerly Bombay) exhibits an important interchange of influences from Victorian Italianate Gothic Revival architecture, and from Indian Traditional buildings. It became a symbol for Mumbai as a major mercantile port city on the Indian subcontinent within the British Commonwealth.

The Chhatrapati Shivaji Terminus (formerly Victoria Terminus) building is the expression of the British, Italian and Indian architectural planning and its use for Indian Railways. The entire building retains entire structural integrity. Its façade, outer view and usage are original. The premise of the building is a strictly protected area maintained by Indian Railways. The property is protected by a 90.21 hectare buffer zone. The Terminus is one of the major railway stations in the Metropolis of Mumbai and more than 3 million rail commuters use it everyday. In addition to the initial 4 railway tracks, the terminus now facilitates 7 suburban and 11 separate out-station tracks. This has led to the restructuring of several areas in the surroundings, and the addition of new buildings. Indian Railways are working to decongest this terminus and to deviate some of the traffic to other stations.

The property is located in the southern part of the city, and it is subject to huge development pressures and potential redevelopment. However, considering the business interests in such a central place, there is a continuous challenge regarding development control. Another risk comes from intensive traffic flow and the highly polluted air in the region around the railway station. Industrial pollution in the area has been reduced due to reduction in industrial and harbour activities. Another problem is the saline air from the sea.
The fire protection system needs to be checked and upgraded.

The heritage building retains a large percentage of its original structural integrity. The authenticity of the structure expresses the rich Italian gothic style through the eye catching 3D-stone carvings of local species of animals, flora and fauna, symbols, arched tympana, portrait roundels of human faces, and stone mesh works on the decorated rose windows. The elaborate detailing of the heritage building is original. It has carvings made in local yellow malad stones blended with Italian marble and polished granite in a few places. The architectural detailing is achieved through white limestone. The doors and windows are made of Burma teak wood with some steel windows mounted in the drum of the octagonal ribbed masonry dome with the coats of arms and corresponding paintings in stained glass panels. There are large numbers of other embellishments in statuary, which the architect has introduced in decorating the grand frontage. These further include gargoyles, allegorical grotesques carrying standards and battle-axes, and figures of relief busts representing the different castes and communities of India. In prominent places on the façade the bas-reliefs of the ten directors of the old Great Indian Peninsula Railway Company (GIPR) are shown. The entrance gates to Chhatrapati Shivaji Terminus (formerly Victoria Terminus) carry two columns, which are crowned, one with a lion (representing the United Kingdom) and the other with a tiger (representing India) and there are tympana portraying peacocks.

However, internal modifications and external additions effected a moderate change in the authenticity. These changes were generally reversible and have since listing been reverted to bring the building and surroundings to its original glory.

The property has been declared as a “Heritage Grade – I” structure under the resolution of Maharashtra State Government Act on 21st April 1997. Continual efforts are being made to improve the overall state of the property and to ensure that the same does not decay due to its use by commuters and visitors. The buffer zone is established to prevent and reduce negative development in the surroundings. All legal rights of the property are vested in the Ministry of Railways, Government of India. Mumbai was the first city in India to have heritage legislation, enacted by Government Regulation in 1995 (N° 67). The Chhatrapati Shivaji Terminus (formerly Victoria Terminus) and the Fort area, of which it is part, are protected on the basis of this legislation. A multidisciplinary committee, called Mumbai Heritage Conservation Committee (MHCC) was established to ensure the protection of heritage buildings. There are 624 listed buildings in the whole city, out of which 63 buildings are Grade-I structures: this includes the Terminus building. The administrative control and the management of this property lie with the Divisional Railway Manager, Mumbai Division of Central Railway. The day-to-day maintenance and protection of the building is also the responsibility of the Divisional Railway Manager. The Chhatrapati Shivajhi Terminus (formerly Victoria Terminus) has also been considered to be developed as a World Class Station by Indian Railways; this would lead to decongesting and reducing the pressures on this Terminus Station, which is now over-crowded by traffic.

The Mumbai Metropolitan Regional Development Authority (MMRDA) is working on the Mumbai Urban Transportation Plan, aiming at up-grading the transport network. On the local level, there will be changes in the management system, which will have consequences for the area of the eastern water front of the city. The Terminus, which is situated in this area is in a strategic position, and will therefore also be affected by these developments.

The long term management plan for the Chhatrapati Shivaji Terminus (formerly Victoria Terminus) was initiated in 1997 by Indian Railways by appointing the Architectural Conservation Cell (ACC) as Consultant. At the moment, the second phase works are under progress involving the restoration of the Terminus station; this includes conservation works on the property, management of traffic around the site, tourism management, and training of personnel.

The funds for the management of the Terminus station are provided by the Indian Government. Indian Railways have the means to set aside funds for conservation work required for the upkeep of their buildings. The technical management system of the railway operates adequately, and from this fundamental viewpoint it provides full guarantees for the conservation of the property’s Outstanding Universal Value. An agency experienced in the conservation field has been appointed to ensure the architectural conservation of the station buildings and its annexes. The management plan needs to be improved in terms of architectural conservation, and by involving the territorial authorities.