The List Assisi, the Basilica of San Francesco and ...
Print

Assisi, the Basilica of San Francesco and Other Franciscan Sites

Assisi, the Basilica of San Francesco and Other Franciscan Sites

Assisi, a medieval city built on a hill, is the birthplace of Saint Francis, closely associated with the work of the Franciscan Order. Its medieval art masterpieces, such as the Basilica of San Francesco and paintings by Cimabue, Pietro Lorenzetti, Simone Martini and Giotto, have made Assisi a fundamental reference point for the development of Italian and European art and architecture. 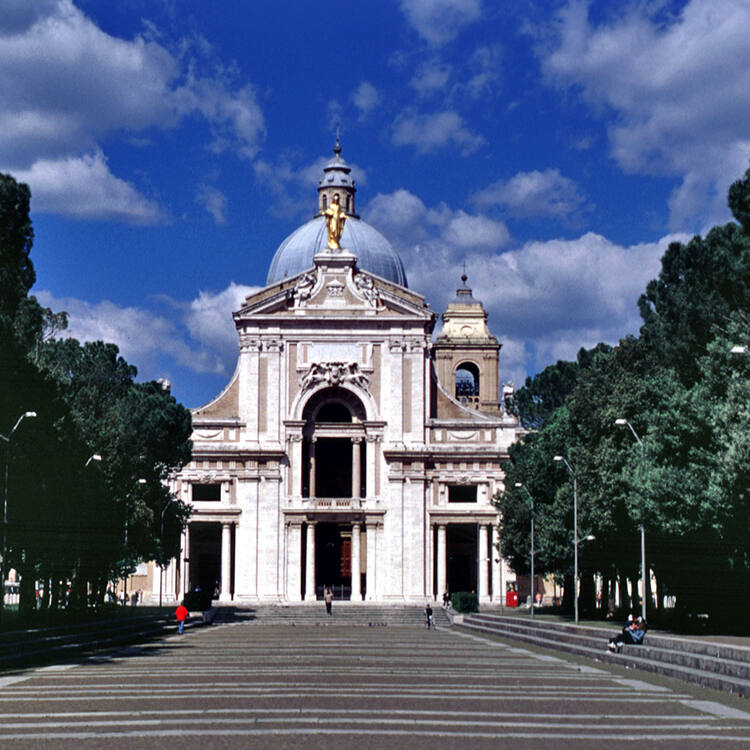 The property is situated in the central Italian region Umbria, on the slopes of the hill of Asio at the foot of the Subasio mountain, and comprises a rather large territory in which most of the important Franciscan places are located. Assisi and its built territory represent an outstanding example of an Umbrian hill town and cultural landscape that has maintained its historical stratigraphy since antiquity.

Assisi, developed in ancient Roman times achieving importance, in part, as a religious and spiritual centre.  It continues that role into the present with its association with the birth and life of Saint Francis (1182-1226) and development of the Franciscan Order since the 13th century, which gives it an important influence in Italy and around the world. The medieval historic centre grew on the foundations of the terraced Roman town extends from the southeast to the northwest. It is flanked by the San Francesco Basilica at one end and the Basilica Santa Chiara at the other. At the summit of the hill town is the Rennaisance fort of Rocca Maggiore. Beyond the town’s walls, the site includes the Carceri Hermitage, in the valley, originally a series of caves occupied by Saint Francis and his companions, and the Saint Damian and Rivotorto sanctuaries along with the Santa Maria degli Angeli Basilica in the plain. It is an extensive site, covering 14,563 hectares with an additional 4,087-hectare buffer zone.

Its association with the works of medieval masters and related art masterpieces, from the Basilica of San Francesco along with the paintings by Cimabue, Pietro Lorenzetti, Simone Martini and Giotto, have made Assisi a fundamental reference point for the development of Italian and European art and architecture.

Criterion (i): Assisi represents an ensemble of masterpieces of human creative genius, such as the Basilica of San Francesco, which have made it a fundamental reference for art history in Europe and in the world.

Criterion (ii): The interchange of artistic and spiritual message of the Franciscan Order has significantly contributed to developments in art and architecture in the world.

Criterion (iii): Assisi represents a unique example of continuity of a city-sanctuary within its environmental setting from its Umbrian-Roman and medieval origins to the present, represented in the cultural landscape, the religious ensembles, systems of communication, and traditional land-use.

Criterion (iv): The Basilica of San Francesco is an outstanding example of a type of architectural ensemble that has significantly influenced the development of art and architecture.

Criterion (vi): Being the birthplace of the Franciscan Order, Assisi has from the Middle Ages been closely associated with the cult and diffusion of the Franciscan movement in the world, focusing on the universal message of peace and tolerance even to other religions or beliefs.

The site boundary is adequate as it comprises all the elements, which contribute to the property’s Outstanding Universal Value. The layers of history are preserved with the present town being constructed on the foundations of the ancient Roman town. The territory’s extent assures that a comprehensive representation of the characteristics of its cultural heritage is taken into account, allowing an understanding of their relationships with the landscape, which still maintains its high visual impact. In particular, the boundary comprises the San Francesco Basilica, within the extraordinary and stratified Assisi historic centre, and the other Franciscan places, which have marked the artistic history in Europe as well as in other continents.

Threats to the historic fabric include earthquakes, which have been a factor in Assisi and the surrounding Umbrian region since early times. Tourism may present an additional threat, as this is one of Italy’s major tourist sites and a principal Christian pilgrim site after the Vatican.

Assisi has maintained its authenticity in a remarkable manner. The town’s urban fabric continues to reflect the influences of various époques. Evidence of the Umbrian-Roman town survives on which later urban projects developed. For example, the medieval defence system incorporated elements of ancient Roman structures. The present urban form evolved primarily from the late 15th through the 18th centuries and very little construction has taken place since the mid 20th century. The Roman form continues outside of the town walls with evidence of the ancient road system and land divisions, adapted in the medieval era. The forests and natural areas north and east of the town contain hermitage sites and monastic complexes. Moreover, forested areas linked with Saint Francis are still extant. In addition to the built fabric and cultural landscape, the important artistic works by Cimabue, Giotto, and other masters have been well preserved.

Much of the construction, from ancient times to the present, has been in limestone creating a distinctive Assisi type of stone construction giving unity throughout the various development periods as well as building types.

Assisi continues its medieval role as a spiritual centre for the Franciscan order and an important Christian pilgrimage. Even though the recent earthquake did cause some damage (e.g. collapse of parts of the vaults in the Basilica of San Francesco), the monuments and important art works have since been subject to restoration works following internationally accepted policies. A large number of historic documents found in the libraries, archives and museum, provide information on the individual monuments as well as the entire historic territory.

The legal protective structure and management system are adequate, as the site exhibits a good state of conservation. The historic centre and the religious complexes distributed in the territory are kept in an excellent conservation state, thanks to a systematic and continuous monitoring.

Protection of the site is guaranteed by several legal measures of protection that operate at national, regional, local level. The principal monuments and listed buildings of Assisi, such as the basilicas and other religious complexes as well as the listed urban and rural buildings, are protected by law and under the direct control of the competent offices of the Ministry of Cultural Heritage and Activities, responsible for art and architecture, archaeology, or archives. The local authority is in charge of controlling the implementation of the law and the legal norms. In addition, since 1950s, the entire municipal area is under legal protection for its natural environment and landscape value. In 1972, a first Master Plan, which identified the areas of protection and conservation and regulated the land use, was approved. This Master Plan is regularly updated to provide additional protection for heritage, including an inventory of existing resources in the rural territory.

At a municipal level, the safeguarding of cultural heritage is reinforced both by an urban planning tool (the Structural Plan) and the World Heritage Management Plan. Together they support an integrated policy for the protection, preservation and valorisation of the property. Specific guidelines for Assisi’s cultural landscape conservation have also been developed and implemented. In addition, a study for the creation of an Observatory to monitor all the natural and anthropic factors related to the property has been undertaken.

An ad hoc office created by the Assisi Municipality is responsible for the management of the World Heritage property. The office is in charge of the Management Plan for the World Heritage property as well as for its valorisation, promotion and monitoring over time. The Management Plan is re-evaluated and updated every five years in order to reassure the adequate safeguarding of the cultural heritage within the town and its territory. Further aims of the Management Plan are to support traditional artisan activities and agricultural production, and to promote cultural and educational initiatives that will bring attention to and understanding of the tangible and intangible heritage resources of the property.

play_arrow Assisi, the Basilica of San Francesco and Other ... (UNESCO/NHK)