Located in the state of Veracruz, El Tajin was at its height from the early 9th to the early 13th century. It became the most important centre in north-east Mesoamerica after the fall of the Teotihuacan Empire. Its cultural influence extended all along the Gulf and penetrated into the Maya region and the high plateaux of central Mexico. Its architecture, which is unique in Mesoamerica, is characterized by elaborate carved reliefs on the columns and frieze. The 'Pyramid of the Niches', a masterpiece of ancient Mexican and American architecture, reveals the astronomical and symbolic significance of the buildings. El Tajin has survived as an outstanding example of the grandeur and importance of the pre-Hispanic cultures of Mexico. 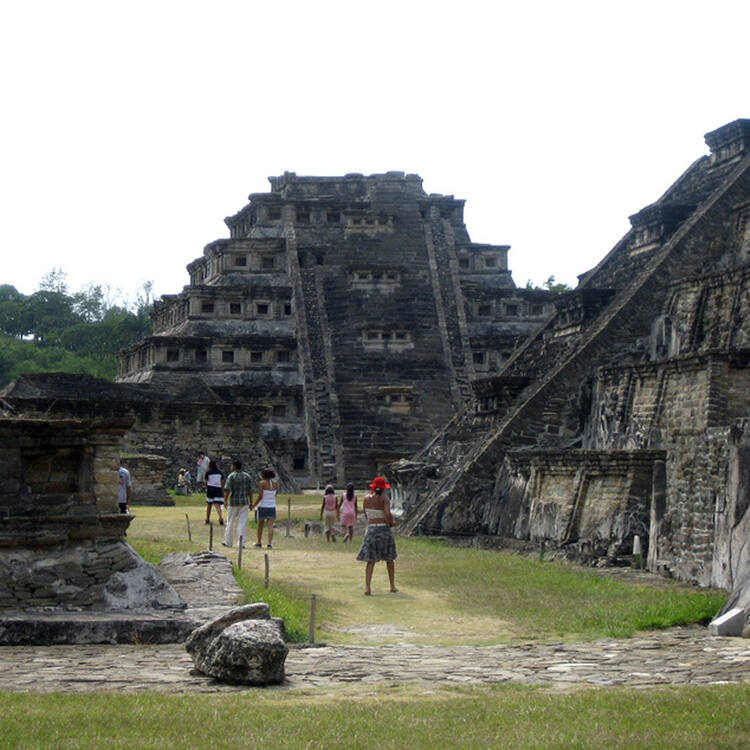 El Tajín, Prehispanic City is a site with great significance for Mesoamerican archaeology because it is one of the best preserved and most thoroughly excavated examples of a pre-Hispanic town from the Epiclassic and early Post Classic period, the time between the fall of Teotihuacan and the rise of the Aztec empire. It is crucial to an understanding of the artistic and socio-economic development in these intervening centuries.

It was previously thought that occupation of the El Tajín pre-Hispanic settlement took place in three phases, between 100 B.C. and 1200 A.D. However, recent research has shown that there was only one phase of occupation lasting from 800 to 1200 A.D. El Tajín was abandoned and partly destroyed after 1200 A.D., when the region came under the rule of the powerful Aztec empire. The most important attributes of El Tajín are the buildings with the rich decoration of key-patterns, fretworks, niches, cornices, wall paintings and low reliefs. The reliefs and paintings discovered at the site contain important information on ritual and daily life. The site is furthermore exceptional in that its urban layout is based on the form of the Xicalcoliuhqui (the schematic representation of the cross section of a marine shell) and uses the different levels of the terrain to differentiate access to certain areas. The architecture mirrors the skyline of the surrounding hills. A further exceptional element is the large quantity of ball courts (17) at the site and the building in the form of a Xicalcoliuhqui that is unique in Mesoamerica.

The settlement has a calculated population of 15.000 - 20.000 inhabitants, distributed over three areas, each constructed around a number of open spaces. The Tajín complex, defined by two streams and a wall to the east, is the lowest lying of the three. One of the most impressive monuments is the Pyramid of the Niches, recorded in 1785.

The Tajín complex communicates directly with Tajín Chico, which is constructed on an artificial mound 7 m high. The Tajín Chico complex has not been fully excavated but has revealed some interesting details of this part of the site. Especially noteworthy is Building A, which represents smaller ball courts at each of its four corners, and has a Mayan style arch at the southern access. It is the most richly decorated building in El Tajín, with vertical bands of relief and key-pattern friezes. In Tajín, the plazas are rectangular while in Tajín Chico they are either trapezoidal or in the form of a Greek fret.

The third area, which is linked with and lies above Tajín Chico, is known as the Group of Columns. The name is due to the fact that the larger of the two pyramidal structures has a portico supported by columns, which themselves are richly decorated with relief sculptures.

Criterion (iii): El Tajín supplies unique information on Epiclassic and early Post Classic Mesoamerica and it is the most important site on the Gulf Coast of Mexico in that epoch. The artistic, architectural, and historical values of El Tajín combine to make this a highly significant site. The reliefs and paintings discovered at the site contain important information on society, ritual and daily life. Although there is still uncertainty concerning the origin of this culture, it has been attributed to the huastecos and totonacos, the latter being the indigenous people that are currently living in the area.

Criterion (iv): The site is furthermore exceptional in that its urban layout is based on the form of the Xicalcoliuhqui (the schematic representation of the cross section of a marine shell) and uses the different levels of the terrain to differentiate access to certain areas. Other exceptional elements are the large quantity of ball courts (17), public buildings (168), temples (27), residences (58), altars (3), and domestic houses (46).

All the monuments at El Tajín, including their surrounding landscape, with which they make up an indivisible unit in a harmonious relationship that has survived virtually unaltered over the centuries, have been preserved. All attributes that express the Outstanding Universal Value of the pre-Hispanic City of El Tajín are duly protected within the boundaries of the inscribed property, an area of 1221 hectares including the buffer zone, allowing for the highest level of conservation.

However, there are threats to the integrity and the conservation of the site, derived from development pressure, and the staging of the annual festival “Cumbre Tajín”. The festival activities can result in excessive or inadequate use of the site and will require constant control and monitoring in order to avoid negative impacts.

The site had been undisturbed for over 500 years when investigations began there, and only minor additions or reconstructions have been made since.

El Tajín is a site that is under the custody of the National Institute of Anthropology and History (INAH). It is legally protected by the Mexican Federal Law on Monuments and Archaeological, Artistic and Historical Zones of 1972. In 2001 the site was declared Archaeological Monument Zone by a presidential decree, with a polygon of 1221 hectares, including the archaeological area declared World Heritage.

In 2009 a Management plan for the site was approved by the INAH. The plan promotes a sustainable vision of integral conservation and protection of the material and immaterial values of the site. The plan includes the aspects of protection, conservation, investigation, interpretation, creation of public awareness, participation and use, as well as the administration of the site and defines short, medium and long term actions.

Strict application of the existing legislation and the sustainable implementation of the defined planning tools as well as the allocation of resources to conservation and management are necessary means to ensure the conservation of the Outstanding Universal Value of the property in the long term.