Torun owes its origins to the Teutonic Order, which built a castle there in the mid-13th century as a base for the conquest and evangelization of Prussia. It soon developed a commercial role as part of the Hanseatic League. In the Old and New Town, the many imposing public and private buildings from the 14th and 15th centuries (among them the house of Copernicus) are striking evidence of Torun's importance. 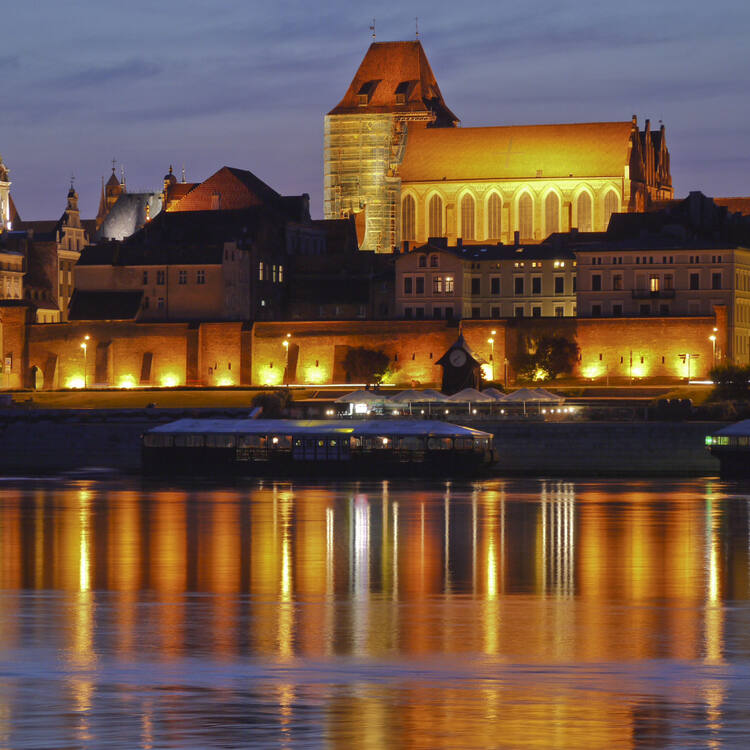 Medieval Town of Torun © OUR PLACE The World Heritage Collection

Toruń in northern Poland is a remarkably well preserved example of a medieval European trading and administrative centre, located on the Vistula River. Toruń was founded in the period when Christianity was being spread through Eastern Europe by the military monks of the Teutonic Order, and when rapid growth in trade between the countries of the Baltic Sea and Eastern Europe was being spurred by the Hanseatic League. Toruń became a leading member of the Hanseatic League in the territories ruled by the Teutonic Order.

The Medieval Town of Toruń is comprised of three elements: the ruins of the Teutonic Castle, the Old Town, and the New Town. The combination of the castle with the two towns, surrounded by a circuit of defensive walls, represents a rare form of medieval settlement agglomeration. The majority of the castle – which was built in a horseshoe-shaped plan in the mid-13th century as a base for the conquest and evangelization of Prussia – was destroyed during an uprising in 1454, when the local townspeople revolted against the Teutonic Order. The ruins and the archaeological remains have been excavated and safeguarded. The Old Town was granted an urban charter in 1233, which swiftly led to its expansion as a major commercial trading centre. The adjacent New Town developed from 1264, mainly as a centre for crafts and handiwork. Both urban areas bear witness to the interchange and creative adaptation of artistic experience that took place among the Hanseatic towns.

An exceptionally complete picture of the medieval way of life is illustrated in the original street patterns and early buildings of Toruń. Both the Old Town and the New Town have Gothic parish churches and numerous fine medieval brick townhouses, many of which have retained their original Gothic façades, partition walls, stucco-decorated ceilings, vaulted cellars, and painted decoration. Many townhouses in Toruń were used for both residential and commercial purposes. A fine example is the house in which Nicolaus Copernicus was reputedly born in 1473; it has been preserved as a museum devoted to the famous astronomer’s life and achievements. The townhouses often included storage facilities and remarkable brick granaries, some of which were up to five storeys high. Because so many houses have survived from this period, the medieval plots are for the most part still preserved, delineated by their original brick boundary walls.

Criterion (ii): The small historic medieval trading and administrative city of Toruń preserves to a remarkable extent its original street pattern and outstanding early buildings. It set a standard for the evolution of towns in this region during Eastern Europe’s urbanisation process in the 13th and 14th centuries. The combination of two towns with a castle is a rare form of medieval settlement agglomeration that has survived almost intact, and numerous buildings of considerable intrinsic value have been faithfully preserved within the town. In its heyday, Toruń boasted a wide range of architectural masterpieces, which exerted a powerful influence on the whole of the Teutonic state and the neighbouring countries.

Criterion (iv): Toruń provides an exceptionally complete picture of the medieval way of life. Its spatial layout provides valuable source material for research into the history of urban development in medieval Europe, and many of its buildings represent the highest achievements in medieval ecclesiastical, military, and civil brick-built architecture.

All the elements that sustain the Outstanding Universal Value of the Medieval Town of Toruń are located within the boundaries of the property. The property’s medieval urban layout encircled by a ring of defences remains intact, including two market squares, Town Hall, townhouses, churches, and the Teutonic Castle. This layout and Toruń’s compact, cohesive architectural fabric are substantially of medieval origin. The historic panoramas of the town are unaltered, shaped by the monumental silhouettes of the Gothic churches and Town Hall that dominate the skyline, rising above multiple varieties of townhouses with diverse façades and various geometries of ceramic-tiled roofs. The administrative, commercial, and tourist functions of contemporary Toruń (concentrated within the Old Town) do not pose a threat to the property, which does not suffer from adverse effects of development and/or neglect.

The Medieval Town of Toruń is remarkably authentic in terms of its location and setting, forms and designs, and materials and substances. It is an original, unchanged example of medieval town planning based on a regular grid of quarters, streets, and building blocks, designed in keeping with 13th-century regulations and extant in a recognizable form. The authenticity of the Teutonic Castle, built in a horseshoe-shaped plan surrounded by a curtain wall and moats, is attested by conservation records, its structure, the functions of its rooms, and its historic fabric, even though the castle survives only in the form of ruins. Its location between two medieval towns, set on the high bank of the Vistula River, is entirely authentic. The material substance of the buildings is likewise authentic: the Gothic origins of the city walls, gates, towers, churches, walls defining building plots, and townhouses are evidenced by their structures, cellars, interior walls, elevations, architectural details, and interior décor.

The authenticity of the urban planning concept linking Toruń with Hanseatic Europe, and of the surviving architectural structures, provide evidence of the continuity of traditional construction techniques and technologies incorporating templates, forms, and colour schemes widely used throughout the city and region.

The inscription of the Medieval Town of Toruń in the National Heritage Register and its status as a Monument of History afford this property the full statutory protection provided by laws regulating the protection of monuments in Poland. The property, which constitutes a part of the city that includes all contemporary urban functions, is managed by the city mayor, the head of the local authorities, and the city council. The rules of conduct with reference to monuments inscribed in the National Heritage Register are defined by Polish law and are compatible with the regulations regarding spatial development, the creation of new buildings and green spaces, and local government jurisdiction. The Municipal Monuments Protection Office, which operates within the framework of the municipal council, is legally responsible for the protection and maintenance of historic monuments.

The Office of Toruń City Centre, appointed to streamline management within the bounds of the World Heritage property and its immediate vicinity, coordinates and monitors commercial, catering, tourist, recreational, cultural, promotional, and advertising activities, and undertakes events aimed at increasing social awareness of the value of the Old Town. The Municipal Programme for the Guardianship of Monuments developed for Toruń sets out strategies for protective, educational, and promotional activities with reference to the cultural resources of the city.

In order to ensure effective protection in the face of potential threats and risks resulting from investment activity and the necessity to allow for development needs, and to address environmental pressures, it will be necessary to prepare and implement a valid, up-to-date local spatial development plan for this World Heritage property (48 ha) and its buffer zone (300 ha). Moreover, sustaining the Outstanding Universal Value, authenticity, and integrity of the Medieval Town of Toruń over time will require preparing, approving, and implementing a comprehensive Management Plan to provide long-term protection and effective management of the property.