The Varberg Radio Station at Grimeton in southern Sweden (built 1922–24) is an exceptionally well-preserved monument to early wireless transatlantic communication. It consists of the transmitter equipment, including the aerial system of six 127-m high steel towers. Although no longer in regular use, the equipment has been maintained in operating condition. The 109.9-ha site comprises buildings housing the original Alexanderson transmitter, including the towers with their antennae, short-wave transmitters with their antennae, and a residential area with staff housing. The architect Carl Åkerblad designed the main buildings in the neoclassical style and the structural engineer Henrik Kreüger was responsible for the antenna towers, the tallest built structures in Sweden at that time. The site is an outstanding example of the development of telecommunications and is the only surviving example of a major transmitting station based on pre-electronic technology. 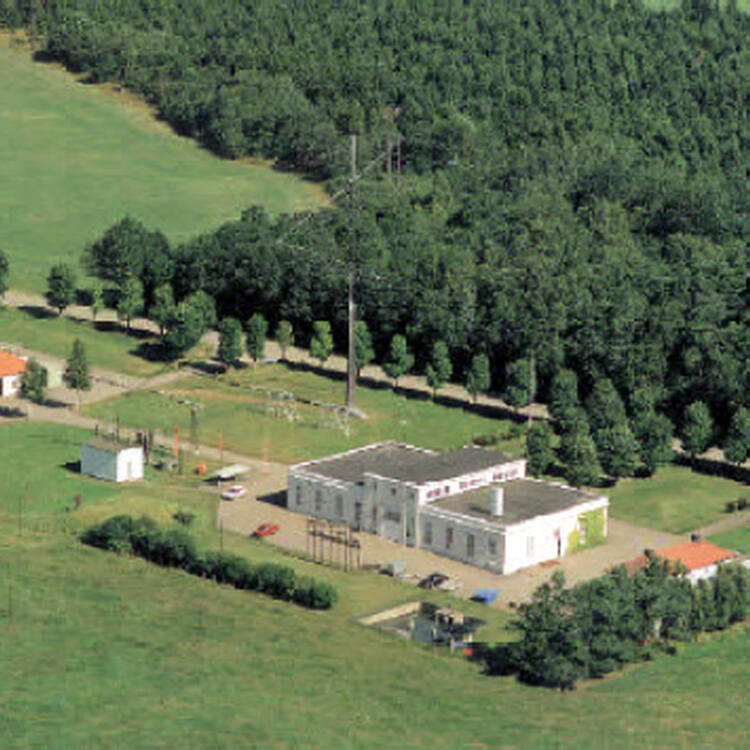 The Grimeton Radio Station, Varberg parish in southern Sweden, built in 1922-1924, is an exceptionally well-preserved monument to early wireless transatlantic communication. Located on the Swedish west coast, it lies within the “great circle” – an area without obstacles to radio waves – that is centred on New York, the hub of the transatlantic transmitting system. The station property consists of the transmitter equipment, including the aerial system with six enormous steel towers each 127 metres high, buildings housing the original Alexanderson transmitter, and short-wave transmitters with their antennae, as well as a residential area with staff housing. The station’s main buildings, built in the neoclassical style, were designed by architect Carl Åkerblad, and the antenna towers – the tallest constructions in Sweden at that time – were designed by structural engineer Professor Henrik Kreüger. Although the station is no longer in regular use, its equipment is maintained in operating condition. This property is an outstanding illustration of the development of telecommunications. It is unique, being the only surviving example of a major transmitting station based on pre-electronic technology, and stands as a testimony to the earliest part of a new era of communications.

Criterion (ii): Grimeton Radio Station, Varberg is an outstanding monument representing the process of development of communication technology in the period following the First World War.

Criterion (iv): Grimeton Radio Station, Varberg is an exceptionally well preserved example of a type of telecommunication centre, representing the technological achievements by the early 1920s, as well as documenting the further development over some three decades.

The Grimeton Radio Station, Varberg, which is still fully operational, retains all the significant elements linked to early wireless telecommunication, including the pre-electronic Alexanderson transmitter equipment housed in its neoclassical building as well as the comprehensive aerial system with towers and antennae. Its boundaries thus adequately ensure the complete representation of the features and processes that convey the property’s significance. The 109.9 ha property, which has a 3.854 ha buffer zone, does not suffer from any adverse effects of development and/or neglect. It has been noted that the property is situated in an attractive part of Sweden that has witnessed a certain amount of development pressure, though concentrated primarily in the coastal region.

The Grimeton Radio Station, Varberg is well preserved in its entirety. It authentically (and uniquely) illustrates an important era in the history of human communication in terms of its forms and designs, materials and substances, use and function, and location and setting. The Alexanderson installation has remained essentially unchanged since the time of its construction in 1922-1924. Any modifications reflect the fact that this station was in continuous operation until it was taken out of commercial use in 1960. After this time, it was used occasionally for military purposes. The station originally included two Alexanderson alternators along with control equipment and auxiliary machinery. One of these was dismantled and scrapped in 1960, but the second is well preserved and fully maintained in operating condition. The antenna plant, with its six towers, is essentially the same today as when it was constructed in 1923-1924. Minor modifications to these towers were undertaken during their forty years of commercial operation. The condition of the transmitter hall is essentially the same as when it was inaugurated in 1925. It has undergone only minor modifications as the result of changing technical and administrative requirements. This also applies to the station’s auxiliary buildings. The houses used for the station’s staff are still used today. From time to time, these buildings have been renovated according to improvements in housing standards, but the historic character of the residential area is preserved.

Several legal acts protect the attributes that sustain the Outstanding Universal Value of the property and regulate this historical site and its buffer zone. The buildings, equipment, and buffer zone are protected under the Historic Environment Act (1988:950) and the Planning and Building Act (1987); the radio station is designated an Area of National Interest for heritage conservation under the federal Environmental Code. The Swedish state, through the Halland County Administrative Board, disposes funds which can be used for the care and maintenance of this property.

The Grimeton Radio Station, Varberg property is managed by a board composed of representatives from the Halland County Administrative Board, Varberg Municipality, and TeliaSonera, which represent the regional and local authorities and the principal founder of the foundation. In addition, an Administrative Council functions as a reference and support group for this board. Members of the Administrative Council include the county governor, politicians, public officials, and experts in relevant technical and cultural fields and in public involvement. A management plan developed in accordance with guidelines set out by UNESCO to address and monitor the protection and conservation needs of this property was adopted in 2004 and revised in 2014. Sustaining the Outstanding Universal Value of the property over time will require managing any risk to the property that could arise from development pressure in this part of Sweden.