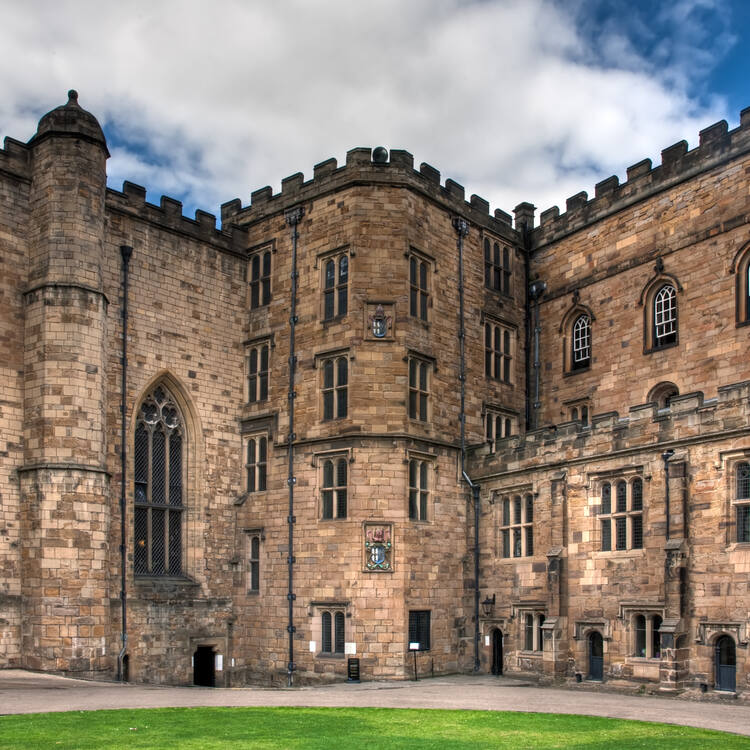 Durham Cathedral was built between the late 11th and early 12th century to house the bodies of St. Cuthbert (634-687 AD) (the evangeliser of Northumbria) and the Venerable Bede (672/3-735 AD). It attests to the importance of the early Benedictine monastic community and is the largest and finest example of Norman architecture in England. The innovative audacity of its vaulting foreshadowed Gothic architecture. The Cathedral lies within the precinct of Durham Castle, first constructed in the late eleventh century under the orders of William the Conqueror.

The Castle was the stronghold and residence of the Prince-Bishops of Durham, who were given virtual autonomy in return for protecting the northern boundaries of England, and thus held both religious and secular power.

Within the Castle precinct are later buildings of the Durham Palatinate, reflecting the Prince-Bishops’ civic responsibilities and privileges. These include the Bishop’s Court (now a library), almshouses, and schools. Palace Green, a large open space connecting the various buildings of the site once provided the Prince Bishops with a venue for processions and gatherings befitting their status, and is now still a forum for public events.

The Cathedral and Castle are located on a peninsula formed by a bend in the River Wear with steep river banks constituting a natural line of defence. These were essential both for the community of St. Cuthbert, who came to Durham in the tenth century in search of a safe base (having suffered periodic Viking raids over the course of several centuries), and for the Prince-Bishops of Durham, protectors of the turbulent English frontier.

The site is significant because of the exceptional architecture demonstrating architectural innovation and the visual drama of the Cathedral and Castle on the peninsula, and for the associations with notions of romantic beauty in tangible form. The physical expression of the spiritual and secular powers of the medieval Bishops’ Palatinate is shown by the defended complex and by the importance of its archaeological remains, which are directly related to its history and continuity of use over the past 1000 years. The relics and material culture of three saints, (Cuthbert, Bede, and Oswald) buried at the site and, in particular, the cultural and religious traditions and historical memories associated with the relics of St Cuthbert and the Venerable Bede, demonstrate the continuity of use and ownership over the past millennium as a place of religious worship, learning, and residence in tangible form. The property demonstrates its role as a political statement of Norman power imposed on a subjugate nation and as one of the country's most powerful symbols of the Norman Conquest of Britain.

Criterion (ii): Durham Cathedral is the largest and most perfect monument of ‘Norman’ style architecture in England. The small astral (castle) chapel for its part marks a turning point in the evolution of 11th century Romanesque sculpture.

Criterion (iv): Though some wrongly considered Durham Cathedral to be the first ‘Gothic’ monument (the relationship between it and the churches built in the Île-de-France region in the 12th century is not obvious), this building, owing to the innovative audacity of its vaulting, constitutes, as do Spire [Speyer] and Cluny, a type of experimental model which was far ahead of its time.

Criterion (vi): Around the relics of Cuthbert and Bede, Durham crystallized the memory of the evangelising of Northumbria and of primitive Benedictine monastic life.

There are no immediate threats to the property or its attributes. The visual integrity of the property relates to its prominent position high above a bend in the River Wear, and there is a need to protect key views to and from the Castle, Cathedral and town, that together portray one of the best known medieval cityscapes of medieval Europe.

The property has remained continually in use as a place of worship, learning and residence. Durham Cathedral is a thriving religious institution with strong links to its surrounding community. The Castle is accessible through its use as part of the University of Durham, a centre of excellence for learning.

A series of additions, reconstructions, embellishments, as well as restorations from the 11th century onward have not substantially altered the Norman structure of Durham Cathedral. The monastic buildings, grouped together to the south of the Cathedral comprise few pristine elements but together make up a diversified and coherent ensemble of medieval architecture, which 19th century restoration works, carried out substantially in the chapter house and cloister, did not destroy.

The architectural evolution of the Castle has not obscured its Norman layout. Within the Castle, the astral chapel, with its groined vaults, is one of the most precious testimonies to Norman architecture circa 1080 AD. The slightly later Norman Gallery at the east end has retained its Norman decoration of a series of arches decorated with chevrons and zigzags.

The siting of the Castle and Cathedral in relation to the surrounding city has been sustained, as has its setting above the wooded Wear valley, both of which allow an understanding of its medieval form.

Government guidance on protecting the Historic Environment and World Heritage is set out in the National Planning Policy Framework and Circular 07/09. Policies to protect, promote, conserve and enhance World Heritage properties, their settings and buffer zones are also found in statutory planning documents. World Heritage status is a key material consideration when planning applications are considered by the Local Authority planning authority. The Durham Local Plan and emerging Local Development Framework contains policies to protect, promote, conserve and enhance the Outstanding Universal Value of the Durham World Heritage property and its setting.

Both the Castle and Cathedral are protected by designation with the Cathedral Grade 1 listed and also protected through the ecclesiastical protection system, and the Castle Grade 1 listed. The whole property lies within the Durham City Centre Conservation Area, managed by Durham County Council.

The property lies within a conservation area and care is given to preserving views to and from the property, in particular from the Pretends’ Bridge, where the Castle and Cathedral dominate the steeply wooded island banks forming part of an 18th century designed landscape. Given the topography of the site, and the conservation area surrounding it, the preservation of key views is more important than the definition of a buffer zone. There is nevertheless a need to ensure the protection of the immediate and wider setting of the property in light of the highly significant profile of the Castle, Cathedral and city and its distinctive silhouette visible day and night. This is addressed by examining planning proposals in light of their potential impact on views to, from and of the property, rather than just their proximity to the property itself.

Tourism Management has been an important focus for the landowners and other institutional stakeholders over the last few years, with numerous initiatives being put in place to improve the quality of the tourist offer without compromising any of the property’s values or its ability to function. The property’s approach to tourism is one of maintaining similar levels of tourism but providing better and greater intellectual and physical access to the site, as well as delivering a varied programme of world class cultural events that bring larger numbers of people to the property on occasion.

The property faces no serious threats. The main objectives are to continue to maintain the architectural fabric, to ensure integration of the property’s management into the management of the adjoining town and wider landscape, to assess and protect key views into and out of the property and to improve interpretation, understanding and to encourage site-specific research. 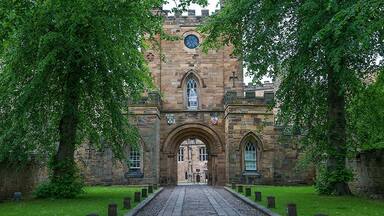 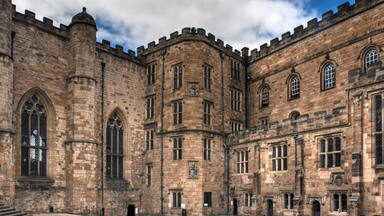