The walled coastal town of Al Zubarah in the Persian Gulf flourished as a pearling and trading centre in the late 18th century and early 19th centuries, before it was destroyed in 1811 and abandoned in the early 1900s. Founded by merchants from Kuwait, Al Zubarah had trading links across the Indian Ocean, Arabia and Western Asia. A layer of sand blown from the desert has protected the remains of the site’s palaces, mosques, streets, courtyard houses, and fishermen’s huts; its harbour and double defensive walls, a canal, walls, and cemeteries. Excavation has only taken place over a small part of the site, which offers an outstanding testimony to an urban trading and pearl-diving tradition which sustained the region’s major coastal towns and led to the development of small independent states that flourished outside the control of the Ottoman, European, and Persian empires and eventually led to the emergence of modern day Gulf States. 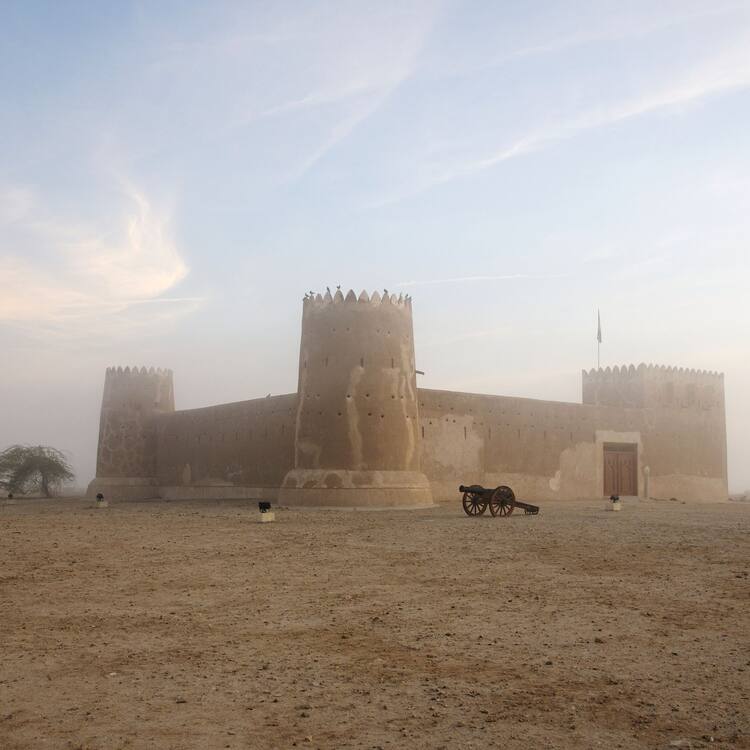 The walled coastal town of Al Zubarah in the Persian Gulf flourished as a pearling and trading centre for a short period of some fifty years in the late 18th and early 19th centuries.

Founded by Utub merchants from Kuwait, its prosperity related to its involvement in trade of high value commodities, most notably the export of pearls. At the height of its prosperity, Al Zubarah had trading links with the Indian Ocean, Arabia and Western Asia.

Al Zubarah was one of a long line of prosperous, fortified trading towns around the coast in what is now Qatar, and in other parts of the Persian Gulf, that developed from the early Islamic period, around the 9th century AD, onwards and established a symbiotic relationship with inland settlements. Individually these trading towns probably competed with each other over the many centuries during which the India Ocean trade was plied.

Al Zubarah was mostly destroyed in 1811 and finally abandoned in the early 20th century, after which its remaining rubble stone and mortar buildings collapsed and were gradually covered by a protective layer of sand blown from the desert. A small part of the town has been excavated. The property consists of the remains of the town, with its palaces, mosques, streets, courtyard houses, and fishermen’s huts, its harbour and double defensive walls, and, on its land side, of a canal, two screening walls, and cemeteries. A short distance away are the remains of the fort of Qal’at Murair, with evidence of how the desert’s supplies of water were managed and protected, and a further fort constructed in 1938.

What distinguished Al Zubarah from the other trading towns of the Persian Gulf is that it lasted a comparatively short space of time, secondly that it was abandoned, thirdly that it has lain largely untouched since being covered by the desert sands, and fourthly that its wider context can still be read through the remains of small satellite settlements and the remains of possibly competing towns nearby along the coast.

The layout of Al Zubarah has been preserved under the desert sands. The entire town, still within its desert hinterland, are a vivid reflection of the development of an eighteenth- and nineteenth-century trading society in the Gulf region and its interaction with the surrounding desert landscape.

Al Zubarah is not exceptional because it was unique or distinguished in some way from these other settlements, but rather for the way that it can be seen an outstanding testimony to an urban trading and pearl-diving tradition which sustained the major coastal towns of the region from the early Islamic period or earlier to the 20th century, and to exemplify the string of urban foundations which rewrote the political and demographic map of the Persian Gulf during the 18th and early 19th centuries and led to the development of small independent states that flourished outside the control of the Ottoman, European, and Persian empires and which eventually led to the emergence of modern day Gulf States.

Criterion (iii): The abandoned settlement of Al Zubarah, as the only remaining complete urban plan of an Arabian pearl-merchant town, is an exceptional testimony to the merchant and pearl trading tradition of the Persian Gulf during the 18th and 19th centuries, the almost final flourishing of a tradition that sustained the major coastal towns of the region from the early Islamic period or earlier to the 20th century.

Criterion (iv): Al Zubarah, as a fortified town linked to settlements in its hinterland, exemplifies the string of urban foundations that rewrote the political and demographic map of the Persian Gulf during the 18th and early 19th centuries through building on the strategic position of the region as a trading conduit. Al Zubarah can thus be seen as an example of the small independent states that were founded and flourished in the 18th and early 19th centuries outside the control of the Ottoman, European, and Persian empires. This period can now be seen as a significant moment in human history, when the Gulf States that exist today were founded.

Criterion (v): Al Zubarah bears a unique testimony to the human interaction with both the sea and the harsh desert environment of the region. Pearl divers’ weights, imported ceramics, depictions of dhows, fish traps, wells and agricultural activity show how the town’s development was driven by trade and commerce, and how closely the town’s inhabitants were connected with the sea and their desert hinterland.

The urban landscape of Al Zubarah and its relatively intact seascape and desert hinterland are not intrinsically remarkable or unique amongst Persian Gulf settlements, nor do they exhibit unusual land management techniques. What makes them exceptional is the evidence they present as a result of complete abandonment over the last three generations. This allows them to be understood as a fossilised reflection of the way coastal trading towns harvested resources from the sea and from their desert hinterland at a specific time.

Al Zubarah has lain in ruins following its destruction in 1811. Only a small part of the original area was resettled during the late 19th century. As a result, the 18th century urban layout of Al Zubarah has been almost entirely preserved in situ.

The property contains the whole town and its immediate hinterland. The boundary encompasses all the attributes that express siting and functions. The buffer zone encompasses part of its desert setting and context.

The physical remains are highly vulnerable to erosion, both those that are still undisturbed and those that have been excavated. However detailed research and experimentation conducted over the past few seasons, and still on-going is addressing the optimum stabilisation and protection approaches. The whole property is within a strong fence. The integrity of the wider setting is adequately protected.

Only a small part of the town has been excavated in three phases: early 1980s, between 2002 and 2003 and since 2009. Restoration work carried out during the 1980s involved some re-construction of walls and, in some cases, the use of cement which had a destructive effect. Lack of maintenance during the twenty-five years before 2009 also resulted in substantial decay of the exposed walls. Thus the authenticity of the remains revealed by the early excavations has to a degree been compromised. But as this only pertains to a very small percentage of the remains, the overall impact is limited.

Since 2009, new excavations have been back-filled. Starting in 2011 a project has begun to stabilize walls using methods devised following extensive trials and research, and using the latest available information and technologies. These methods should allow parts of the excavated area to be consolidated so that they may be viewed by visitors.

Al Zubarah is designated as an archaeological site according to the Law of Antiquities no. 2 of 1980, and its amendment, Law no. 23 of 2010. As such, it is a legally protected property.

The buffer zone has been legally approved by the Ministry of Municipality and Urban Planning of Qatar. This ensures that no permits will be granted for any economic or real estate development within the Buffer Zone.

Al Reem Biosphere Reserve and the National Heritage Park of Northern Qatar, in which Al Zubarah Archaeological Site is included, have the status of legally Protected Areas. These effectively extend protection to the wider setting, The Madinat Ash Shamal Structure Plan due to be approved in 2013 will guarantee the protection of the site from any urban encroachment from the north-east.

The Qatar National Master Plan (QNMP) states that the protection of cultural heritage sites, of which Al Zubarah Archaeological Site is the country’s largest, is of crucial importance throughout Qatar (Policy BE 16). ‘Conservation Areas’ are established in order to ensure this protection and the policy actions expressly state that this includes Qatar’s northern coastline (Coastal Zone Protection Area) and the area between Al Zubarah and Al Shamal (Al Shamal Conservation Area).The Plan also states that growth will be constrained by the protected areas and that planned road networks shall avoid the Buffer Zone.

A Site Management Unit for the property will until 2015 be run jointly by the Qatar Islamic Archaeology and Heritage (QIAH) project and the Qatar Museums Authority (QMA). A QIAH-appointed Site Manager works in collaboration with a QMA-appointed Deputy Site Manager. A National Committee for the property includes representatives of the various stakeholders groups, including the local community, various Ministries and the Universities of Qatar and Copenhagen, and is chaired by the Vice-Chair of the QMA. Its aim is to facilitate dialogue and to advise the QMA on protection and monitoring of the property.

An approved Management Plan will be implemented in three phases over nine years. The first phase (2011-2015) focuses on archaeological investigation, conservation and the preparation of a master plan for tourism development, including the planning and designing of a visitor centre to be opened in 2015, and capacity building; the second phase (2015–2019) is a medium-term strategy for presentation and capacity building but will include further archaeological investigations and the development of a risk prevention strategy, while in the third phase (2019 onwards), the QMA will take full responsibility for managing the property which should by this time be conserved and presented.

The Qatar Islamic Archaeology and Heritage Project (QIAH) was launched jointly by the QMA and the University of Copenhagen in 2009. This ten year project aims to research the property and its hinterland and preserve its fragile remains.

A Conservation Strategy has been developed that is specifically tailored to the characteristics of earthen architecture and devised to meet the needs of the Al Zubarah ruins. It aims to protect and strengthen the urban remains in order for them to be preserved for future generations; to take a certain amount of annual visitors; and to allow them to be understandable in terms of explaining the town‘s history. It is acknowledged that owing to the environmental conditions and the composition of the historic buildings, conservation work cannot completely stop deterioration and a regular programme of maintenance and monitoring is planned. A  Conservation Handbook has been prepared that includes the Conservation Concept and a Conservation Manual and overall allows the extensive research and analysis that has been undertaken and the agreed conservation strategy to be readily available to all, in a straightforward, readily accessible but highly professional manner.

The challenges facing the conservation of the highly fragile remains in a hostile climate are immense. The approaches being devised for survey, analysis and conservation, as well as visitor management, aim to be exemplary. 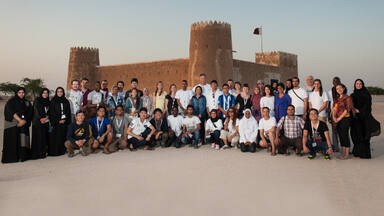 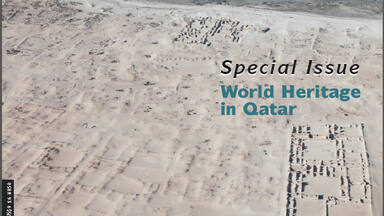