The site of Olympia, in a valley in the Peloponnesus, has been inhabited since prehistoric times. In the 10th century B.C., Olympia became a centre for the worship of Zeus. The Altis – the sanctuary to the gods – has one of the highest concentrations of masterpieces from the ancient Greek world. In addition to temples, there are the remains of all the sports structures erected for the Olympic Games, which were held in Olympia every four years beginning in 776 B.C. 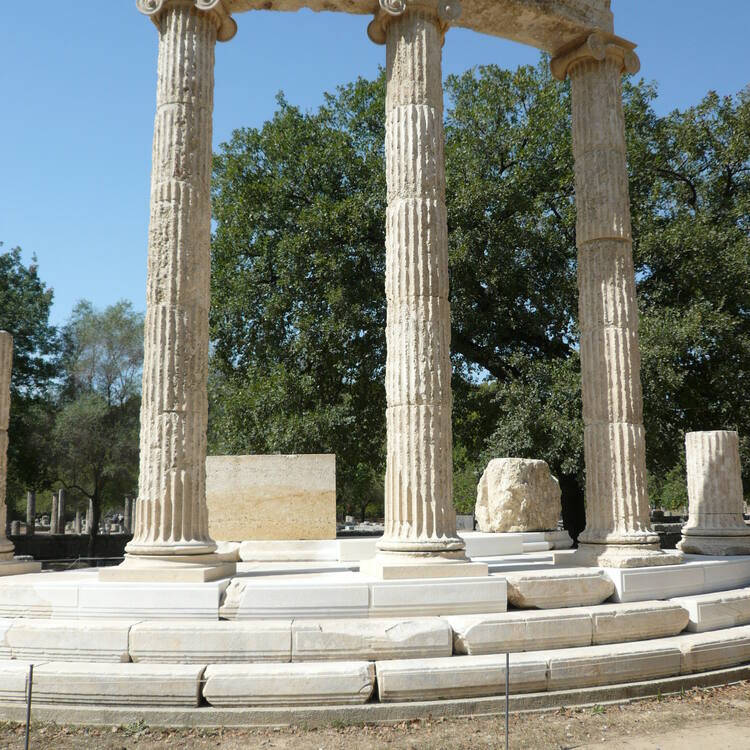 The sanctuary of Olympia, in the North West of the Peloponnese, in the Regional Unit of Eleia (Elis), has been established in the valley created by the confluence of the Alpheios and Kladeos rivers in a natural setting of beauty and serenity. The Pan-Hellenic sanctuary has been established in the history of culture, as the most important religious, political and sports centre, with a history that dates back to the end of the Neolithic times (4th millennium BC). The famous sanctuary became the centre of worship of Zeus, the father of the twelve Olympian gods. For the Altis, the sacred grove and the centre of the sanctuary, some of the most remarkable works of art and technique have been created, constituting a milestone in the history of art. Great artists, such as Pheidias, have put their personal stamp of inspiration and creativity, offering unique artistic creations to the world. In this universal place, the Olympic Idea was born, making Olympia a unique universal symbol of peace and competition at the service of virtue. Here, too, prominence was given to the ideals of physical and mental harmony, of noble contest, of how to compete well, of the Sacred Truce; values, which remain unchanged in perpetuity.

Criterion (i): The sanctuary of the Altis contained one of the highest concentrations of masterpieces of the ancient Mediterranean world. Many have been lost, such as the Olympia Zeus, a gold-and-ivory cult statue which was probably destroyed by Pheidias between 438 and 430 BC and one of the seven wonders of the ancient world. Other masterpieces have survived: large votive archaic bronzes, pedimental sculptures and metopes from the temple of Zeus, and the famous complex of Hermes by Praxiteles. These are all major works of sculpture and key references in the history of art.

Criterion (ii):  The influence of the monuments of Olympia has been considerable: the temple of Zeus, built in 470-457 BC, is a model of the great Doric temples constructed in the Peloponnese, as well as in southern Italy and in Sicily during the 5th century BC; the Nike by Paionios, sculptured circa 420 BC, so lastingly influenced iconographic allegories of victory that neoclassic art of the 19th century is still much indebted to it; the Olympian Palaestra with reference to the Roman period, a square and an open space for athletes’ training as well as a place for their mental and physical preparation before the Games, is undoubtedly the typological reference made by Vitruvius in “De Architectura”. Its value as a standard in architecture is in any case indisputable.

Criterion (iii): Olympia bears exceptional testimony to the ancient civilizations of Peloponnese, both in terms of duration and quality. The first human settlements date back to prehistoric times when the valley was occupied from 4000 to 1100 BC. Settlements and necropolises from the Bronze Age have been unearthed along the banks of the Alpheios river. The Middle Helladic and Mycenaean periods are represented at the site. Consecrated to Zeus, the Altis is a major sanctuary from the 10th century BC to the 4th century AD, corresponding to the zenith of Olympia, marked more specifically by celebration of the Olympic Games from 776 BC to 393 AD. A Christian settlement survived for a time at the site of the ruins of the great Pan-Hellenic sanctuary: discovery of the workshop of Pheidias under the remains of a Byzantine church is an outstanding indication of continuous human settlement, which was interrupted only in the 7th century AD, as a result of natural disasters.

Criterion (iv): Olympia is an outstanding example of a great Pan-Hellenic sanctuary of antiquity, with its multiple functions: religious, political and social. Ancient sanctuaries, such as the Pelopion and a row of Treasuries to the north at the foot of Kronion Hill, are present within the peribolus of the Altis, consecrated to the gods, alongside the principal temples of Zeus and Hera. All around the divine precinct are the structures used by the priests (Theokoleon) and the administration (Bouleuterion), as well as common buildings (Prytaneion), accommodation (Leonidaion and Roman hostel), residences for distinguished guests (Nero’s House), and all the sports structures used for the preparation and celebration of the Olympic Games: the stadium and the hippodrome to the east, and the thermal baths, the Palaestra and the Gymnasium to the south and west.

Criterion (vi): Olympia is directly and tangibly associated with an event of universal significance. The Olympic Games were celebrated regularly beginning in 776 BC. The Olympiad –the four-year period between two successive celebrations falling every fifth year- became a chronological measurement and system of dating used in the Greek world. However, the significance of the Olympic Games, where athletes benefitting from a three-month Sacred Truce came together from all the Greek cities of the Mediterranean world to compete, demonstrates above all the lofty ideals of Hellenic humanism: peaceful and loyal competition between free and equal men, who are prepared to surpass their physical strength in a supreme effort, with their only ambition being the symbolic reward of an olive wreath. The revival of the Olympic Games in 1896 through the efforts of Pierre de Coubertin illustrates the lasting nature of the ideal of peace, justice and progress, which is no doubt the most precious but also the most fragile feature of the world’s heritage.

In 2007, the surrounding area of the sanctuary of Olympia was hit by fires which have burned out a great part of the Peloponnese, albeit not irreparably,. Through immediate and coordinated efforts, in a short period of time, the natural environment has been restored, without significant alteration of its original form, while the ancient monuments inside the sanctuary were not affected and they are still preserved in very good condition. Consequently, the World Heritage property contains within its boundaries all the key attributes that convey the Outstanding Universal Value of the site. The restoration works on the sanctuary’s monuments have been conducted in accordance with the ethics of science and techniques, while in 2008 the restriction of vehicles’ circulation on the road passing through the foothills of Kronion Hill succeeded in protecting the monuments in its vicinity from vibration, noise and pollutants. The principal threats to the site are fire and flooding.

The sanctuary of Olympia and its surrounding area are preserved in almost intact condition, from ancient times till today. In the sacred Altis, Zeus’ sacred forest, the same tree and plant species are found, as in antiquity. The ancient monuments and the votives, which are displayed in the Museum of Olympia have not undergone any intervention, which would change their form and content. The values of fair competition and Sacred Truce, which were established during the ancient Olympic Games, are diachronic and always pertinent. The visitor of today, when visiting the archaeological site of Olympia, can feel the spirituality and ideological weight of this Olympian landscape.

The property is protected under the provisions of Law No 3028/2002 on the “Protection of Antiquities and Cultural Heritage in general”. The sanctuary of Olympia and its surrounding landscape has been designated as an archaeological site (Government Gazettes 128/B and 216/B of 1992). The property has a sufficient buffer zone and sufficiently effective protection arrangements that prevent any potential threats by the future development of the small settlement of modern Olympia.

The property is under the jurisdiction of the Ministry of Culture, Education and Religious Affairs, through the  Ephorate of Antiquities of Eleia, its competent Regional Service, which systematically supervises the area for any acts of illegal excavations, monitors and intervenes, when necessary, in case any antiquities are revealed during the course of digging works and performs control on excavation works for the foundation of new buildings as well as on their size and architectural design, when appropriate. Furthermore, the Ephorate supervises all the necessary conservation works on the site. The financial resources for the site are derived by the state budget as well as European Union’s funds.

The archaeological site of Olympia is protected at all times. The fire protection infrastructure is checked and preserved annually for effectiveness by the personnel of the Ephorate, in collaboration with the local Fire Service. The dikes that have been constructed along the banks of Alpheios river, south of the sanctuary, protect the archaeological site effectively from the river’s flooding phenomena.

Since 2007, during an annual open event, the competent Ephorate presents its work and activities at the area of the Regional unit of Eleia. Through this open dialogue with the local community and authorities, the enhancement and promotion of the region’s monumental wealth is attempted. Furthermore, the presentation of the Service’s activities on the internet is planned to be created, in order for an open Forum concerning the history and culture of the area of Eleia.

In the archaeological site, many interventions have taken place, such as the new ticket office, the ramps for disabled people and the replacement of the old informative signs. Additionally, close to the site, the creation of the “Olympic Botanical Garden”, containing flora native to the area which has grown since antiquity according to the descriptions of the ancient traveller Pausanias, provide visitors with an opportunity to investigate the native flora and enrich their knowledge concerning the history of Olympia from another perspective. 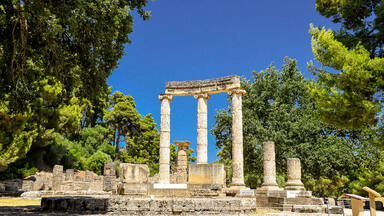 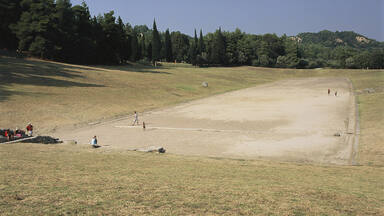 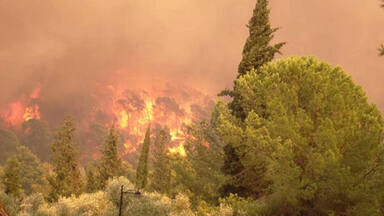 From Olympia's Workshop on World Heritage and Disasters: Joint Communiqué of the UNESCO World Heritage Centre and the Hellenic Ministry of Culture
10 November 2008
Events