The List Painted Churches in the Troodos Region
Print

This region is characterized by one of the largest groups of churches and monasteries of the former Byzantine Empire. The complex of 10 monuments included on the World Heritage List, all richly decorated with murals, provides an overview of Byzantine and post-Byzantine painting in Cyprus. They range from small churches whose rural architectural style is in stark contrast to their highly refined decoration, to monasteries such as that of St John Lampadistis. 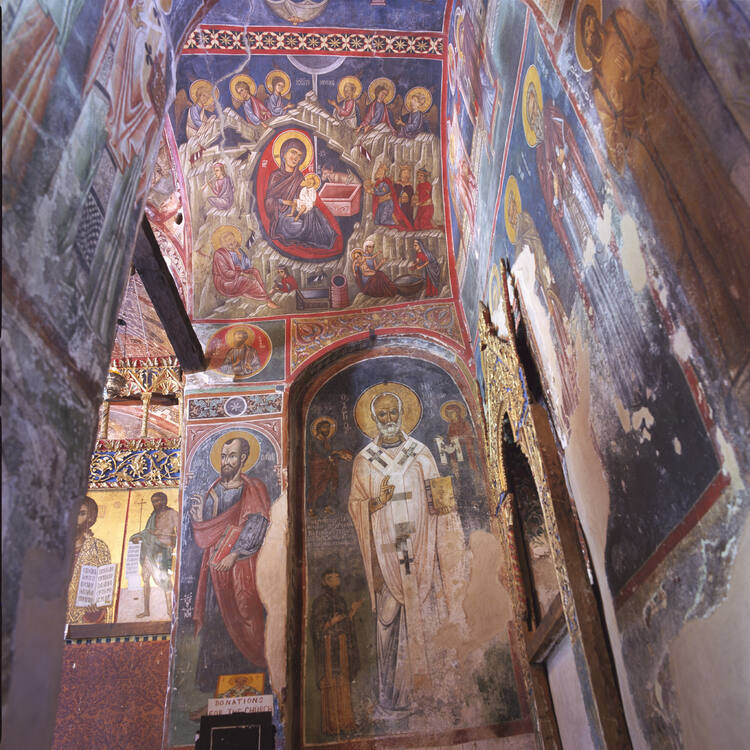 The Troodos mountain region of Cyprus contains one of the largest groups of churches and monasteries of the former Byzantine Empire. The ten monuments included on the World Heritage List, all richly decorated with murals, provide an overview of Byzantine and post-Byzantine painting in Cyprus and bear testimony to the variety of artistic influences affecting Cyprus over a period of 500 years. The structures display elements that were specific to Cyprus and were determined by its geography, history and climate, including steep-pitched wooden roofs with flat hooked tiles, in some cases providing a second roof over Byzantine masonry domes and vaulted forms, while exhibiting Byzantine metropolitan art of the highest quality. The architecture of these churches is unique, confined to the Troodos range and almost certainly of indigenous origin. They range from small churches whose rural architectural style is in stark contrast to their highly refined decoration, to monasteries such as that of St John Lampadistis. They also contain a wealth of dated inscriptions, an uncommon feature in the Eastern Mediterranean during the Middle Ages, which makes them particularly important for recording the chronology of Byzantine painting. Important examples of the 11th century iconography survive in the churches of St. Nicholas of the Roof and Panagia Phorbiotissa of Nikitari. Within Panagia tou Arakou in Lagoudera and St. Nicholas of the Roof are found important wall paintings from the Comnenian era, with the first being of exceptional artistic quality attributed to Constantinopolitan masters. The 13th century, the early period of Latin (western) rule in Cyprus, is well represented in the wall paintings of St. John Lampadistis in Kalopanagiotis and in Panagia in Moutoulla, which reflect the continuing Byzantine tradition and new external influences. The 14th century wall paintings at Panagia Phorbiotissa, Timios Stavros at Pelendri and St. John Lampadistis also display both local and Western influences, and to a certain degree, the revived art of Paleologan Constantinople. In the late 15th century iconography at Timios Stavros Agiasmati and Archangelos Michael, Pedoulas exhibits once again the harmonious combination of Byzantine art with local painting tradition, as well as some elements of Western influence, which are different, however, from the earlier series of St. John Lampadistis that was painted by a refugee from Constantinople. The Venetian rule, which began in 1489 was reflected in the development of the Italo-Byzantine school, and the most sophisticated examples can be found in Panagia Podhithou and the north chapel of St. John Lampadistis, both successful examples of Italian Renaissance art and Byzantine art fusion. Finally, the wall paintings of the Church of the Transfiguration of the Savior in Palaichori form part of the Cretan school of the 16th century.

Criterion (ii): Although the existence of any direct influence cannot be confirmed, very close relationships existed, during the 12th century, between painting in Cyprus and Western Christian art (stylistic relationships in the case of Nikitari paintings; iconographical relationships in the case of the paintings of Lagoudera). Thus, there do exist some answers to the very complex question of ties between the two Christianities. These answers take the form of Cypriot monuments, which precede the constitution of the Frankish Lusignan Kingdom, which was a fundamental link in the chain of East-West artistic exchanges.

Criterion (iii): The paintings of the Troodos Region bear an outstanding testimony to the Byzantine civilization at the time of the Comnenes, thanks to the Nikitari and Lagoudera ensembles. It should be noted that the former, where the name Alexis Comnene is mentioned in a dedication, was probably executed by artists from Constantinople and the latter was painted at the very time of the fall of Isaac Comnene and the sale of Cyprus to Guy de Lusignan.

Criterion (iv): The churches of the Troodos Region are a well conserved example of rural religious architecture during the Byzantine period. The refinement of their décor provides a contrast with their simple structure. The latest post-Byzantine painters alone, with their “rustic” style, are at times in harmony with this vernacular architecture.

The wholeness or intactness of the site is related to the fact that all ten churches of the property are living monuments and continue to be used as places of worship and for other religious practices, thus preserving their original function. They individually retain their architectural fabric and their rich decoration, which separately form a whole assemblage and together complete a set that exhibit Byzantine and post-Byzantine painting in Cyprus. Their surroundings, which in most cases consist of rural countryside, augment their rural exterior in contrast to their décor. Their good state of preservation is directly related to the actions taken by the state, as conservation works are carried out on a yearly basis to the buildings, the wall paintings and wooden furniture, as well as the surrounding areas of the churches. An issue affecting the site is the increasing number of visitors, which occasionally results in pressure from the local church authorities for new facilities incompatible with the character and value of the monuments. In addition, an increase in criminal activities such as robberies has been observed in the past years, enabled by the rural location. Natural disasters and environmental pressures are also associated with the geography of the site, while development pressures arise occasionally. Measures have been implemented to mitigate these threats.

The key elements of the property – the design, materials, execution and function of the churches – retain a high degree of authenticity. The works undertaken for conservation of the structures and the wall paintings are implemented in a manner that respects the original material and its aesthetic value, without compromising the authenticity of the monuments. The religious functions, the environmental, cultural and historical factors that shaped the site are still evident today and through the collective efforts of the Department of Antiquities, the local communities and the church authorities, their preservation is pursued.

The management of the site is under the direct supervision of the Curator of Ancient Monuments and the Director of the Department of Antiquities. Cultural and archaeological heritage in Cyprus is protected and managed according to the provisions of the national legislation, i.e. the Antiquities Law and the International Treaties signed by the Republic of Cyprus. In accordance with the Antiquities Law, Ancient Monuments are categorized as of the First Schedule (governmental ownership) and of the Second Schedule (private ownership). The churches included in the site “Painted Churches of the Troodos Region” are listed as Ancient Monuments of the Second Schedule and their legal owner is the Church of Cyprus. The national legislation, with regard to monuments listed as of the Second Schedule, requires written authorization from the competent authority, i.e. the Department of Antiquities, before any intervention may take place. In this framework, the responsibility for the protection of the churches is shared between the State and the various church authorities. However, the inscription of these monuments on the UNESCO World Heritage List led the State to undertake the management of the site in order to avoid any arbitrary interventions on the monuments. The entire cost of conservation works is now funded by the Department of Antiquities from the annual budget. Furthermore, the Law provides, under Section II article 11, for the establishment of Controlled Areas within the vicinity of the sites. According to article 11, the Director of the Department of Antiquities controls the height and architectural style of any building proposed for erection within the Controlled Area, in order to safeguard the historic and the archaeological character, the amenities and the environment surrounding an Ancient Monument. Such Controlled Areas have been defined for the churches included in the serial property.

The ten churches continue to be used as places of worship and for religious practices. The continuous use of all the churches for religious ceremonies is a decisive factor for delivering social benefits. At the same time, the churches constitute important visitor attractions and are open to the public for no entrance fee. Local people are fully involved in the management of the site as these churches are the property of the local church authorities and the responsibility for making the monuments accessible to visitors is vested in them.

Pressures on the property are being addressed through increased monitoring by the Department of Antiquities and installation of theft and fire alarm systems in the ten churches, together with the creation of Controlled Areas and further expropriation of lands in the vicinity of the churches.

Once finalised and agreed upon, the Management Plan prepared by the Department of Antiquities shall address the conservation, promotion and preservation needs of the serial property, and will aim for the preservation of its unique value for future generations by producing basic guidelines and policies for all the parties involved. The serial property Painted Churches in the Troodos Region was given enhanced protection status by the Committee for the Protection of Cultural Property in the Event of Armed Conflict in November 2010.