Mount Lushan, in Jiangxi, is one of the spiritual centres of Chinese civilization. Buddhist and Taoist temples, along with landmarks of Confucianism, where the most eminent masters taught, blend effortlessly into a strikingly beautiful landscape which has inspired countless artists who developed the aesthetic approach to nature found in Chinese culture. 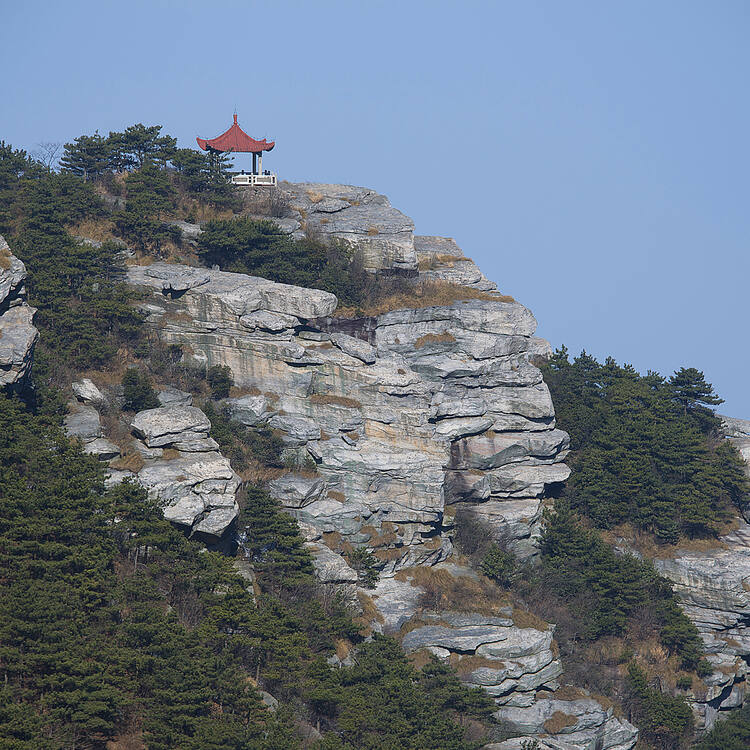 Mount Lushan is located in Jiujiang City, Jiangxi Province. The property area of Lushan National Park occupies a total area of 30,200 hectaresand its highest Peak, Hanyang Peak, is 1,474 meters above sea level. Bordered on the north by the Yangtze River and on the south by Poyang Lake, Mount Lushan presents an integral scene of river, hills and lake, the beauty of which has attracted spiritual leaders, scholars, artists and writers for over 2,000 years. More than 200 historic buildings are located in the Lushan National Park; complexes of prayer halls that have been rebuilt and extended many times to create an ongoing centre for study and religion. These include the Buddhist East Grove Temple complex begun by Huiyuan in 386 CE; the West Grove Pagoda begun around 730 CE; the Temple of Simplicity and Tranquility built during the Tang dynasty as the repository of Taoist scriptures, and the White Deer Cave Academy originally established in 940 CE and revived in the late 12th century during the Song dynasty when Zhu Xi instigated the spread of Confucius’ political and ethical teaching. This complex continued to be extended up to the 19th century to include many temples, study halls and libraries. Other important features include the stone single-span Guan Ying Bridge of 1,015 CE and more than 900 inscriptions on cliffs and stone tablets. In addition there are around 600 villas built by Chinese and foreign visitors in the late 19th and 20th centuries, when the area became a popular resort and was, during the 1930s and 40s the official Summer Capital of the Republic of China.  The villas reflect various architectural fashions and are laid out within the landscape in accordance with Western planning concepts prevalent at the time.

Mount Lushan has an important place in Chinese history and culture. It is an outstanding representative of Chinese landscape culture, as well as a remarkable model of Chinese academy-based education, and a focal point for the integration of Chinese and Western cultures, once acting as the cultural center of southern China. The significant cultural developments and political events occurring over the course of Lushan’s history have influenced the course of Chinese history.

Criterion (ii): The building and layout of temples and educational buildings within the scenic landscape at Lushan have created a cultural landscape exhibiting an interchange of values over a long period from the Han dynasty in the late 3rd century BCE through to the early 20th century.

Criterion (iii): The Lushan landscape has inspired philosophy and art. The selective and sensitive integration of high quality cultural properties into this landscape is exceptional testimony to Chinese appreciation of the harmonious interaction of natural beauty and culture.

Criterion (iv): The group of ancient buildings at the White Deer Cave Academy represents the architectural model for Chinese traditional academies. Guanyin Bridge, a stone arch bridge with a rabbet and mortise structure, has played a very important role in Chinese bridge building. The groups of modern villas are a testament to the penetration of Western culture into China’s hinterlands in the late 19thcentury to the middle of the 20th century.

Criterion (vi): Huiyuan, who created the Pure Land Sect of Buddhism at Lushan’s Donglin Temple, inaugurated an era of the localization of Buddhism in China. Zhu Xi revitalized the White Deer Cave Academy, making it the model for the popularization of Song and Ming Dynasty Confucian idealist philosophy and the model of academy-based education. His influence continued over 700 years of Chinese history after the Song Dynasty. The Confucian idealist philosophy as interpreted by Zhu Xi, and his educational pattern, spread as far as Japan, Korea, Indonesia and elsewhere, and has played a very important role in the global history of education.

The property area of Lushan National Park covers 30,200 hectares, and the buffer zone is 50,000 hectares. The property area and buffer zone contain all necessary elements relevant to the formation of the cultural heritage, as well as to the presentation of its heritage values, including ancient buildings, ruins, modern villas, stone inscriptions, vegetation on the mountain and its waterfalls and streams, which integrally displays the cultural and natural elements of the Lushan cultural landscape.

Mount Lushan has rich cultural and natural heritage, which authentically preserve the unique elements and characteristics of Mount Lushan’s creation, development and inheritance, including cultural, historical and natural elements such as ancient monuments and sites, villas, ancient stone inscriptions, paintings and poems dating to different historic periods, and streams and waterfalls, peaks and valleys. Temporary or partial damage of the ecological environment can be quickly and effectively restored. Restoration and intervention have followed principle of retaining the historic condition of the heritage in terms of design, materials, methods, and techniques. Thus, the property retains its historical authenticity, which permanently preserves the value of this “famous cultural mountain”.

In 1982, Mount Lushan became one of the first National Scenic Areas and one of the First Class National Nature Reserves, with the property area and buffer zone delimited. All attributes of Mount Lushan are effectively protected by the laws and regulations pertaining to the management of national scenic areas, and to the protection of cultural heritage and its setting. Any measures and projects that may significantly impact the heritage value must be authorized by the relevant national authorities.

The Lushan Scenic and Historic Interest Administrative Bureau focused on sustainable development of the property, and made increased investments in conservation and management. Both mid-term and long-term master plans for protecting the property have been made. Special attention has been placed on protecting the cultural heritages and their settings as a whole, and how to protect them more scientifically. Additional efforts have been made towards researching rational use of the property. Broad cooperation and exchanges have been undertaken. Conservation measures are strictly carried out. Environmental management and development projects are being tightly controlled. The right balance between heritage conservation and tourism development has been maintained, making it possible for the sustainable development of the property.