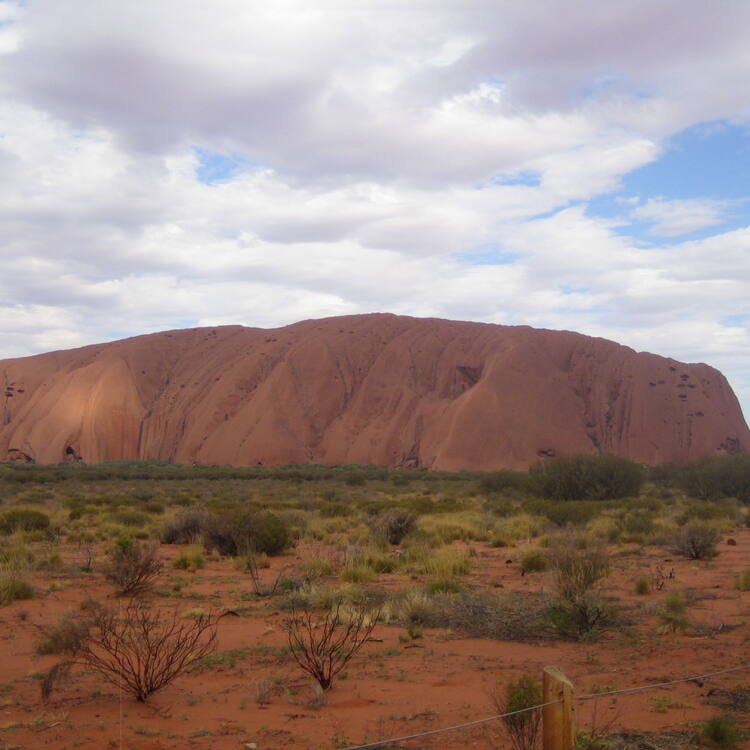 There is strong and powerful Aboriginal Law in this Place. There are important songs and stories that we hear from our elders, and we must protect and support this important Law. There are sacred things here, and this sacred Law is very important. It was given to us by our grandfathers and grandmothers, our fathers and mothers, to hold onto in our heads and in our hearts ©

We learnt from our grandmothers and grandfathers and their generation. We learnt well and we have not forgotten. We’ve learnt from the old people of this place, and we’ll always keep the Tjukurpa in our hearts and minds. We know this place – we are ninti, knowledgeable. ©

The sandstone monolith of Uluru and the conglomerate domes of Kata Tjuta, rise abruptly, to over 300 metres in height, above the relatively flat surrounding sandplains and woodland. Their changing colours provide dramatic views for visitors, shifting from different tones of red, violet and orange as sunlight, shade and rain wash across their flanks.

Far from coastal cities, the rich red tones of Uluru and Kata Tjuta epitomise the isolation, starkness and beauty of Australia’s desert environment. When coupled with the profound spiritual importance of many parts of Uluru-Kata Tjuta National Park, the natural qualities convey a powerful sense of the very long evolution of the Australian continent.

Uluru-Kata Tjuta National Park has been home to Anangu people for tens of thousands of years, and contains significant physical evidence of one of the oldest continuous cultures in the world. Anangu is the term that Pitjantjatjara and Yankunytjatjara Aboriginal people, from the Western Desert region of Australia, use to refer to themselves. Pitjantjatjara and Yankunytjatjara are the two principal dialects spoken in UluruKata Tjuta National Park.

Traditional Anangu law, the Tjukurpa, is the foundation of the Anangu living cultural landscape associated with Uluru Kata Tjuta National Park. The Tjukurpa is an outstanding example of traditional law and spirituality and reflects the relationships between people, plants, animals and the physical features of the land. Tjukurpa was founded at a time when ancestral beings, combining the attributes of humans and animals, camped and travelled across the landscape. They shaped and created all of the features of the land and its landscapes. The actions of these ancestral beings also established a code of behaviour that continues to be followed by Anangu today. This code regulates all aspects of life, from gathering food and management of landscape to social relationships and personal identity. It is expressed in verbal narratives, lengthy Inma (ceremony and associated rituals and song lines), art and the landscape itself.

Criterion (v): The cultural landscape of Uluru-Kata Tjuta National Park is an outstanding living reflection of indigenous Anangu traditional hunting, gathering and other practices of great antiquity that have created an intimate relationship between people and their environment.

Criterion (vi): The cultural landscape is of outstanding significance for the way it is perceived as the creation of Mala, Lungkata, Itjaritjari, Liru and Kuniya - these are heroic ancestral beings of the Tjukurpa. The landscape isread as a text specifying the relationship between the land and its Indigenous inhabitants, as laid down by the Tjukurpa. The monoliths of Uluru and Kata Tjuta are seen as living proof of the heroes' actions and their very being.

Criterion (vii): The huge monolith of Uluru and multiple rock domes of Kata Tjuta (32 kilometres to the west of Uluru) have outstanding scenic grandeur, contrasting with each other and the surrounding flat sand plains. The monolithic nature of Uluru is emphasised by sheer, steep sides rising abruptly from the surrounding plain, with little or no vegetation to obscure the silhouette. The exceptional natural beauty of the Uluru-Kata Tjuta National Park landscape is also of cultural importance to Anangu.

Criterion (viii): The inselbergs (steep-sided isolated hills rising abruptly from the earth) of Uluru and Kata Tjuta are outstanding examples of tectonic, geochemical and geomorphic processes. Uluru and Kata Tjuta reflect the age, and relatively stable nature, of the Australian continent.

Uluru and Kata-Tjuta demonstrate ongoing geological processes of remarkable interest. The sides of Uluru are marked by a number of unusual features which can be ascribed to differing processes of erosion. For example, the colossal geological feature described as Ngaltawata, a ceremonial pole associated with Mala Tjukurpa, is ascribed to sheeting of rock parallel to the existing surface. During rain periods, the runoff from Uluru cascades down the fissures forming waterfalls, some up to 100 metres high. Caves at the base of Uluru are formed by a widespread arid zone process of granular disintegration known as cavernous weathering.

The geological values of Uluru and Kata Tjuta remain in excellent condition. Human impacts are largely confined to tourism activity around the base of Uluru and along the former path to its summit, as well as in residential areas. Invasive species (feral animals) are present, but management measures assist in containing them. Prescribed burning activities, guided by Anangu, help to maintain ecosystem integrity and cultural values and also reduce the likelihood of intense and large-scale wildfires.

Mining is not allowed in Uluru-Kata Tjuta National Park.

Reintroduction programmes for threatened native species are being pursued to enhance the integrity of the property. The Mala or Rufous Hare-wallaby, an important species associated with the cultural landscape of Uluru-Kata Tjuta National Park and considered extinct within the park at the time of nomination, has been reintroduced.

Anangu living in the park help to maintain the landscape and Tjukurpa. The integrity of Anangu cultural processes, such as fire practices and bush food use is strong. Other associations, such as Inma (ceremony and associated rituals and song lines), stories, traditional skills and knowledge, health and healing practices and Anangu family and community connections are actively sustained. Places in the landscape related to these associations are also maintained, including the paths or tracks of ancestral beings, particular sacred sites, waterholes, rock art, places where Anangu lived long ago and sites connected to historic events or people.

The 1986 nomination file stated that both Uluru and Kata Tjuta were in a relatively pristine condition.

Some natural deterioration and some human impacts were noted in relation to some of the rock art and cultural sites at the time of re-nomination of the property under cultural criteria.

Tjukurpa, Anangu law and culture, has remained in place despite other changes since European settlement. Anangu culture remains strong because the Law is embodied in Tjukurpa through Inma, stories, songs, language, knowledge and other practices to look after the country. These elements continue to define the Anangu relationship to their land and each other.

Sustaining the authenticity of the property is related not only to these physical sites but also to the processes of interaction of Anangu with their environment, and to ensuring that visitors understand and respect these traditions. Tourist infrastructure impacts minimally on the landscape.

Anangu cultural heritage extends beyond Uluru-Kata Tjuta National Park and working together with the traditional owners of the surrounding lands is critical for maintenance of the living cultural landscape and Tjukurpa, within and outside the Park.

Joint management is the term used to describe the working partnership between the Anangu traditional owners and the Director of National Parks as lessee of the park. Joint management is based on Aboriginal title to the land and the terms of the lease of the land to the Director of National Parks, which are supported by a legal framework laid out in the Environment Protection and Biodiversity Conservation Act 1999 (EPBC Act). Under these arrangements Tjukurpa continues to help guide the management of Uluru-Kata Tjuta National Park.

Australia has national legislation to directly protect its World Heritage properties through the EPBC Act. Since joint management arrangements began, significant historical management issues have been addressed in the management plan and management arrangements. This includes locating tourist accommodation and airport facilities outside of the Park. Access roads have been redirected so that visitors approach Uluru and Kata Tjuta from the “right way” providing culturally appropriate access. Interpretive materials and appropriate infrastructure protect the sacred places around the base of Uluru and at Kata Tjuta.

As a result of their significance, many of these cultural sites are protected from unauthorised entry and viewing, and there are guidelines in place on commercial filming and photography.

Climate change has emerged as a potential threat to Uluru-Kata Tjuta’s World Heritage values and is likely to bring extreme weather and increase the risk of wildfire. Biodiversity, human health and Indigenous use of the park are all likely to be affected. Park managers are implementing some key measures to help mitigate the impacts of climate change, particularly through the fire management program. As part of these measures, the maintenance of Tjukurpa, including passing on this detailed knowledge, will be crucial.