The capital of Malta is inextricably linked to the history of the military and charitable Order of St John of Jerusalem. It was ruled successively by the Phoenicians, Greeks, Carthaginians, Romans, Byzantines, Arabs and the Order of the Knights of St John. Valletta’s 320 monuments, all within an area of 55 ha, make it one of the most concentrated historic areas in the world. 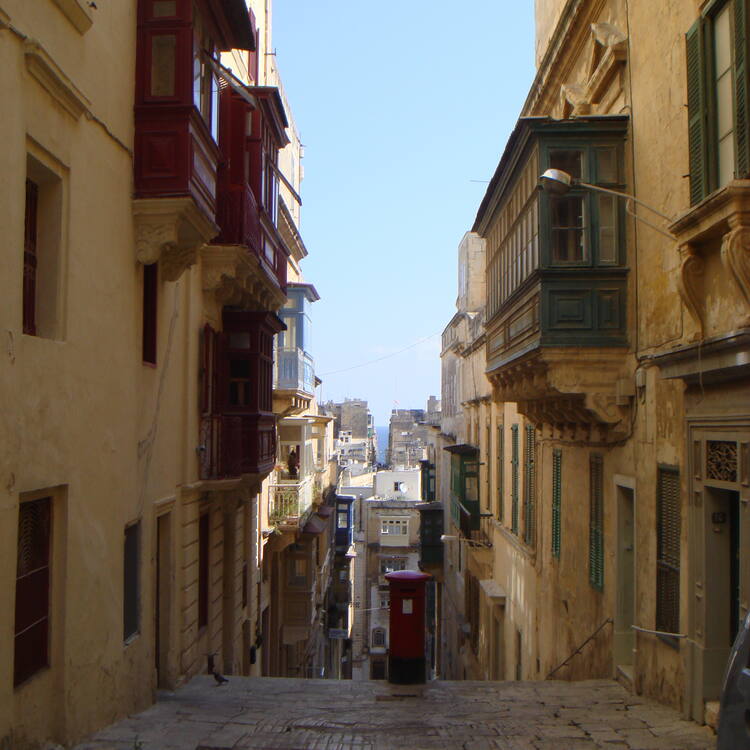 Malta’s capital Valletta is a fortified city located on a hilly peninsula between two of the finest natural harbours in the Mediterranean. The Siege of Malta in 1565 captured the European imagination and mobilised the resources needed to create the new city of Valletta, founded soon after, in 1566. The Knights of St John, aided by the most respected European military engineers of the 16th century, conceived and planned the city as a single, holistic creation of the late Renaissance, with a uniform grid plan within fortified and bastioned city walls. Since its creation, the city has witnessed a number of rebuilding projects, yet those have not compromised the harmony between the dramatic topography and the Hippodamian grid. The fabric of the city includes a compact ensemble of 320 monuments that encapsulate every aspect of the civil, religious, artistic and military functions of its illustrious founders. These include the 16th century buildings relating to the founding of the Renaissance city, such as the cathedral of St John, the Palace of the Grand Master, the Auberge de Castile et Léon, the Auberge de Provence, the Auberge d’Italie, the Auberge d’Aragon and the Infirmary of the Order and the churches of Our Lady of Victory, St Catherine and il Gesù, as well as the improvements attributed to the military engineers and architects of the 18th century such as the Auberge de Bavière, the Church of the Shipwreck of St Paul, the Library and the Manoel Theatre.

Criterion (i): The city is pre-eminently an ideal creation of the late Renaissance with its uniform urban plan, inspired by neo-platonic principles, its fortified and bastioned walls modelled around the natural site and the voluntary implantation of great monuments in well-chosen locations.

The city is built on a narrow peninsula surrounded by water. As a result, the perimeter of the city has remained largely unchanged since the departure of the Knights of St John, unencumbered by more recent development. It is of sufficient size and includes all elements necessary to express its Outstanding Universal Value. In spite of some rebuilding projects during the 19th century and severe damage during World War II, a high proportion of the original monuments and the surrounding urban fabric has been preserved intact or carefully restored. The massing and materials used during these later interventions have blended homogenously with the earlier fabric, simultaneously respecting the original urban form. However, the Outstanding Universal Value of the property is vulnerable to impacts on its setting, form and fabric, deriving from the demands of a living city.

Despite the succession of eventful interludes that Valletta has witnessed since the departure of the Knights, resulting in frequent changes of use of many of the buildings they left behind, Valletta has remained the administrative and commercial epicentre of the island and is today Malta’s capital. The property essentially retains its skyline and form from the 16th century, reflecting the natural topography of the peninsula; however,  this is vulnerable to development pressures resulting in the increase of building heights, which is not always consistent with the city’s historic profile. The original grid of the street plan has been respected and the most important public squares have been retained, although some key monuments were lost to 19th and 20th century re-development. Rebuilding and restoration necessitated by later war damage has respected the materials and proportions of the historic city. The property retains its authenticity in terms of form and design, materials, function, location and setting.

Two laws governing heritage issues were enacted in the 1990s. The first was the Environment Protection Act (No V of 1991), the second The Environment and Planning Development Act (No 1 of 1992), which aims to regulate and establish modern planning procedures. The latter established critical principles of scheduling and grading of historic buildings, and  introduced the concepts of urban conservation areas and protective zoning. Although these policies relate to the whole of Malta and Gozo, they have particular relevance to Valletta. The Grand Harbour Local Plan (realised by the Malta Environment and Planning Authority), in force since 2002, contains policies that specifically protect the World Heritage property.

The Cultural Heritage Act (No VI of 2002, am. 2005) paved the way for the formation of three entities, namely the Superintendence of Cultural Heritage, Heritage Malta and the Malta Centre for Restoration (which was merged with Heritage Malta in 2005). The Act also provides for the creation of Religious Cultural Heritage Commissions, which have the same powers and responsibilities as the Superintendent of Cultural Heritage. However, the latter has no jurisdiction over Church property. From 1995, the most significant buildings, monuments and features of Valletta were afforded statutory protection individually and collectively by means of a scheduling scheme. In addition, the Maltese Government has established a number of national entities to ensure that its aims of conservation and rehabilitation of Valletta are achieved.

Valletta is a living city. It is the nerve centre of the Maltese political, administrative and business sphere as well as a major tourist attraction. The day-to-day demands of a modern community exert heavy demands on the institutional bodies entrusted with safeguarding, conserving and enhancing national monuments which are in daily use. Equally heavy and persistent demands are made on the housing and business premises of the city. To sustain the Outstanding Universal Value of the property, a draft Management Plan for the city was prepared in 2012 and the consultation with stakeholders is ongoing. The adequate implementation of the Management Plan will require collaboration among key entities on large-scale developments within the walled city, as well as clear policies on height controls to protect the city’s skyline and streetscapes, on the extent of the control area for building heights and on view sheds outside the walled city.