From the Neapolis founded by Greek settlers in 470 B.C. to the city of today, Naples has retained the imprint of the successive cultures that emerged in Europe and the Mediterranean basin. This makes it a unique site, with a wealth of outstanding monuments such as the Church of Santa Chiara and the Castel Nuovo. 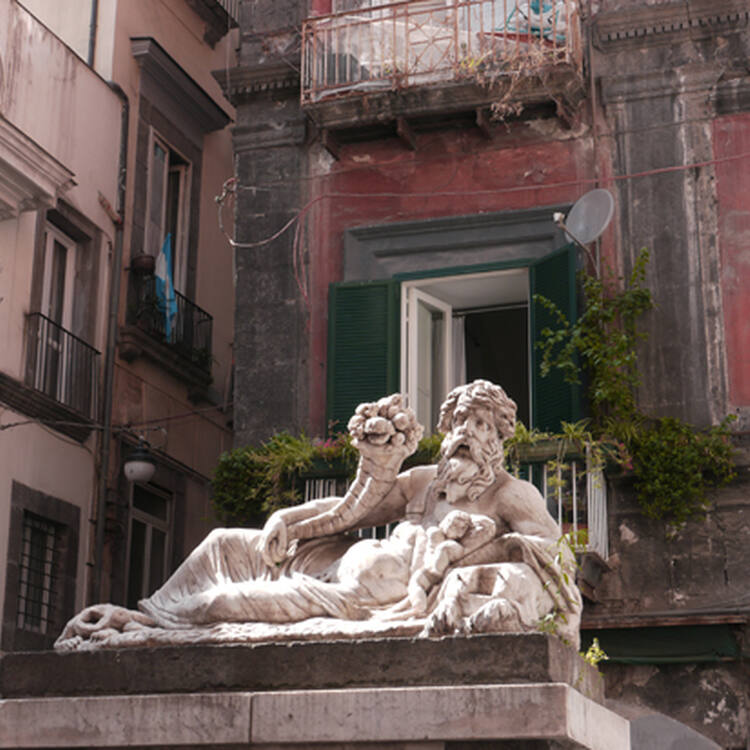 Historic Centre of Naples © OUR PLACE The World Heritage Collection

Located in southern Italy, Naples is a major port city in the centre of the ancient Mediterranean region. Its origins go back to its foundation as Parthenope or Palaepolis in the 9th century B.C., subsequently re-established as Neapolis (New City) in 470 B.C. It is therefore one of the most ancient cities in Europe, whose current urban fabric preserves a selection of outstanding elements of its long and eventful history, as expressed in its street pattern, its wealth of historic buildings and parks, the continuation of many of its urban and social functions, its wonderful setting on the Bay of Naples and the continuity of its historical stratification.

Naples was among the foremost cities of Magna Graecia, playing a key role in the transmission of Greek culture to Roman society. It eventually became a major cultural centre in the Roman Republic, civitas foederata. Sections of the Greek town walls excavated since World War II and the excavated remains of a Roman theatre, cemeteries and catacombs testify to this history. In the 6th century A.D., Naples was conquered by the Byzantine Empire, becoming an autonomous Duchy, later associated with the Normans, Swabians, and the Sicilian reign. Evidence of this period includes the churches of San Gennaro extra moenia, San Giorgio Maggiore, and San Giovanni Maggiore with surviving elements of 4th and 5th century architecture, the chapel of Santa Restituta in the 14th-century cathedral, and the Castel dell'Ovo, one of the most substantial survivals from the Norman period, although subsequently remodelled on several occasions.

With the Angevin dynasty (1265-1442), Naples became the living symbol of the prestige, dignity, and power of the dynasty. The city expanded to include suburbs and neighbouring villages. The Angevin also initiated an influential relationship with Western art and architecture, particularly French Gothic, integrated with the earlier Greek and Arab elements. The convents of Santa Chiara and San Lorenzo Maggiore and the churches of Donna Regina and I’lncoronata, San Lorenzo Maggiore, San Domenico Maggiore and the new Cathedral date from this period.

From the 15th to 17th centuries, Naples was governed by the Aragonese, who remodelled the defences and street pattern, and constructed the Castel Nuovo largely in the Tuscan style as one of the foremost centres of their empire. The period of Spanish rule is marked by the Royal Palace built in 1600 along one side of the imposing Piazza del Plebiscito, the Monte dei Poveri Vergognosi charitable institution, the convent of Sant'Agostino degli Scalzi, and the Jesuit College on Capodimonte.

From 1734, under the government of the Bourbons, Naples emerged, together with Paris and London, as one of the major capital cities of Europe. The architectural heritage of Naples from this period was widely influential, and is expressed particularly in the interior design of the royal palaces and associated noble residences that were part of the territorial system extending far beyond the city itself. Important palaces of the 18th century include the large palace Albergo dei Poveri, the National Archaeological Museum, the Certosa of Suor Orsola Benincasa on the hill of San Martino, and the Villa Pignatelli.

Criterion (ii): The city’s setting on the Bay of Naples gives it an Outstanding Universal Value which has had a profound influence in many parts of Europe and beyond. Naples has exerted great influence on the rest of Europe ever since the antiquity, as a major centre in Magna Graecia and of the Roman Republic. Its role as one of the most influential cultural centres in the Mediterranean region was reconfirmed in the Middle Ages and again from the 16th to 18th centuries, being one of the major European capitals, and exerting important influences in many cultural fields, especially related to art and architecture.

Criterion (iv): Naples is one of the most ancient cities in Europe, whose contemporary urban fabric preserves the elements of its long and eventful history. The rectangular grid layout of the ancient Greek foundation of Neapolis is still discernible and has indeed continued to provide the basic form for the present-day urban fabric of the Historic Centre of Naples, one of the foremost Mediterranean port cities. From the Middle Ages to the 18th century, Naples was a focal point in terms of art and architecture, expressed in its ancient forts, the royal ensembles such as the Royal Palace of 1600, and the palaces and churches sponsored by the noble families.

The World Heritage property of the Historic Centre of Naples includes all the essential elements that contribute to the justification of its Outstanding Universal Value. These comprise the historic centre as defined by the Aragonese walls, as well as significant elements from the 18th century, including important palaces, as well as buildings for governmental, residential, university, health and sanitary, and arts and crafts functions. These buildings and functions represent all the relevant periods of the history of Naples, and are in a fair state of conservation. The important historical relationship of the city to the sea is maintained through the preservation of archaeological remains of the Roman period along the sea coast and the rehabilitation of the small boat harbours found from Castel Nuovo to Capo Posillipo.

A minor boundary modification was approved by the World Heritage Committee in 2011. This enlarged the component “Historic Centre of Naples” and merged and enlarged the components “District of Casale” and “District of Santo Strato”, in order to include a non-developed and protected archaeological area. The property is vulnerable to lack of maintenance of the non-monumental urban fabric. The setting of the property is intact and not threatened by development.

The town plan has a high level of authenticity, and has retained considerable evidence of the Greco-Roman city and the checkerboard layout of the 16th-century “Spanish quarters”. The typology of the public and private buildings has been well retained as part of the current city plan, as well as in their spatial, volumetric, and decorative features. There is remarkable continuity in the use of materials, all derived locally, and distinctive visual and material features, such as the basic yellow tufa, white marble, and the grey piperno. The techniques developed for the use of these materials survive to a considerable degree and are used in restoration and conservation projects.

The 1972 General Town Plan (Ministerial Decree No 1829, 31 March 1972) identifies the protected area of the historic centre, where all interventions must be approved by the appropriate Soprintendenza. The Master Plan confirmed the requirements of the previous plan by expanding the scope of the defined town centre. The provisions of Act No. 47 of 28 February 1985 on “Norms Pertaining to Town Planning and Building Control Activity, Sanctions, Recovery, and Redevelopment of Abusive Works” are applicable to the area, and lay down specifications for building heights and spacing. A large number of buildings in the city are designated under the terms of Act No. 1089 of 1 June 1939, the central piece of Italian legislation relating to heritage protection. These rules were later merged in the code of the cultural heritage and landscape of the D.Lgs n.42/2004.

This means that for these buildings there is a safeguard measure which ensures any activity on the site must be authorized by the relevant Soprintendenza (peripheral office of the Ministry for Cultural Heritage and Activities), which can deny it for conservation reasons, authorize intervention including limitations, authorizing only interventions which do not harm the resource in question.

Other national and regional statutes and regulations relating to planning control and heritage are also applicable to the Historic Centre of Naples. The responsible national agencies are the Ministry for the Environmental and Cultural Heritage, the Campania Regional Council, the Provincial Council of Naples, and the Municipal Council of Naples. The management of the World Heritage property is undertaken by an office of the municipality that was created for the valorisation of the Historic Centre of Naples. This office is responsible for a management plan for the World Heritage property which guides its safeguarding and protection while at the same time ensuring that Naples remains a living and vibrant city. The plan will be regularly monitored to ensure its effectiveness and is updated every 6 to 10 years. The vision of the Management Plan is to safeguard the cultural heritage and to conserve the stratified urban fabric, to support traditional socio-economic interrelations and cultural production, as well as the quality of life, to maintain the mixed uses, to increase security and hygiene, and to raise awareness and understanding of heritage resources. The scope is also to integrate the property within the broader territorial system around the Bay of Naples, Capri, Sorrento, Herculaneum and Pompeii, in the context of cultural tourism for the area.