The ruins of the huge city of Moenjodaro – built entirely of unbaked brick in the 3rd millennium B.C. – lie in the Indus valley. The acropolis, set on high embankments, the ramparts, and the lower town, which is laid out according to strict rules, provide evidence of an early system of town planning. 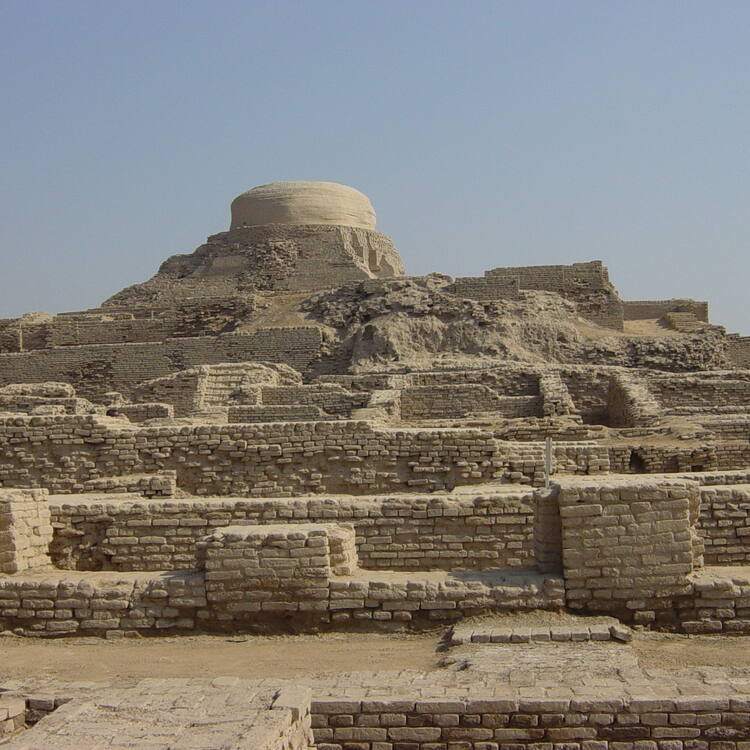 The Archaeological Ruins at Moenjodaro are the best preserved urban settlement in South Asia dating back to the beginning of the 3rd millennium BC, and exercised a considerable influence on the subsequent development of urbanization. The archaeological ruins are located on the right bank of the Indus River, 510 km north-east from Karachi, and 28 km from Larkana city, Larkana District in Pakistan’s Sindh Province. The property represents the metropolis of Indus civilization, which flourished between 2,500-1,500 BC in the Indus valley and is one of the world’s three great ancient civilizations.

The discovery of Moenjodaro in 1922 revealed evidence of the customs, art, religion and administrative abilities of its inhabitants. The well planned city mostly built with baked bricks and having public baths; a college of priests; an elaborate drainage system; wells, soak pits for disposal of sewage, and a large granary, bears testimony that it was a metropolis of great importance, enjoying a well organized civic, economic, social and cultural system.

Moenjodaro comprises two sectors: a citadel area in the west where the Buddhist stupa was constructed with unbaked brick over the ruins of Moenjodaro in the 2nd century AD, and to the east, the lower city ruins spread out along the banks of the Indus. Here buildings are laid out along streets intersecting each other at right angles, in a highly orderly form of city planning that also incorporated systems of sanitation and drainage.

Criterion (ii): The Archaeological Ruins at Moenjodaro comprise the most ancient planned city on the Indian subcontinent, and exerted great influence on the subsequent urbanization of human settlement in the Indian peninsular.

Criterion (iii): As the most ancient and best preserved urban ruin in the Indus Valley dating back to the 3rd millennium BC, Moenjodaro bears exceptional testimony to the Indus civilization.

The Archaeological Ruins at Moenjodaro comprise burnt brick structures covering 240 ha, of which only about one third has been excavated since 1922. All attributes of the property are within the boundaries established for proper preservation and protection. All significant attributes are still present and properly maintained. However the foundations of the property are threatened by saline action due to a rise of the water table of the Indus River. This was the subject of a UNESCO international campaign in the 1970s, which partially mitigated the attack on the mud brick buildings.

The Archaeological Ruins at Moenjodaro comprise the first great urban center of the Indus civilization built 5000 years ago with burnt brick structures. The property continues to express its Outstanding Universal Value through its planning, form and design, materials and location. The setting of the property is vulnerable to the impact of development in its vicinity.

The Archaeological Ruins at Moenjodaro are being protected by National and Regional laws including the Antiquities Act 1975 from the threats of damage, pillage and pilferage and of new developments in and around the boundaries of the property. There is a management system to administer the property, protect and conserve the attributes that carry Outstanding Universal Value, and address the threats to and vulnerabilities of the property as outlined above. A comprehensive Master Plan has been prepared by the Department of Archaeology and Museums, Government of Pakistan to identify the actual extent of the archaeological area of Moenjodaro. However during the process of approval of the Master Plan, the archaeological area of Moenjodaro has been transferred from the Federal Department of Archaeology to the Culture Department, Government of Sindh. Under the Constitution Act 2010 (18th Amendment), the Culture Department, Government of Sindh is now responsible for the proper up-keep and maintenance of the property.

In order to tackle the potential weaknesses as mentioned in the statements of authenticity and integrity there is a site office supported by a scientific laboratory to deal with the issues of conservation and other problems in a scientific way with traditional methods. The problems of salt action, thermal stress and rain are dealt with through a holistic approach involving application of mud slurry, mud capping, re-pointing and other consolidation works such as under- pinning in order to retain the authenticity and integrity of the property. Besides the above threats there is the danger of flood which was mitigated to some extent by constructing embankments and spurs. However, a breach of the dam upstream would cause catastrophic damage. The Department is therefore undertaking regular monitoring of the dam and is seeking secure funding from the Government, NGOs and other donor countries in order to strengthen it. 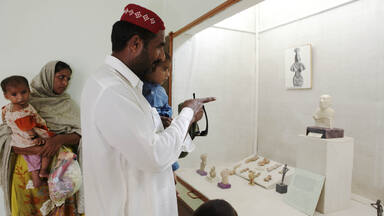 Pakistan- International Campaign for the Safeguarding of Moenjodaro 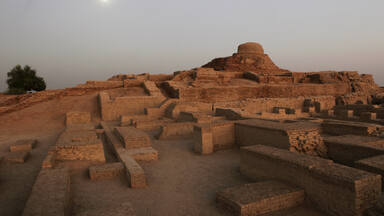 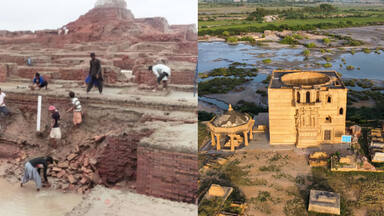 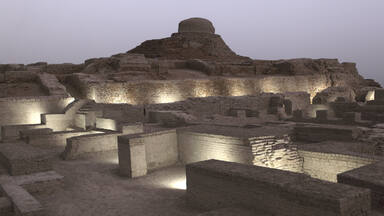