The Rietveld Schröder House in Utrecht was commissioned by Ms Truus Schröder-Schräder, designed by the architect Gerrit Thomas Rietveld, and built in 1924. This small family house, with its interior, the flexible spatial arrangement, and the visual and formal qualities, was a manifesto of the ideals of the De Stijl group of artists and architects in the Netherlands in the 1920s, and has since been considered one of the icons of the Modern Movement in architecture. 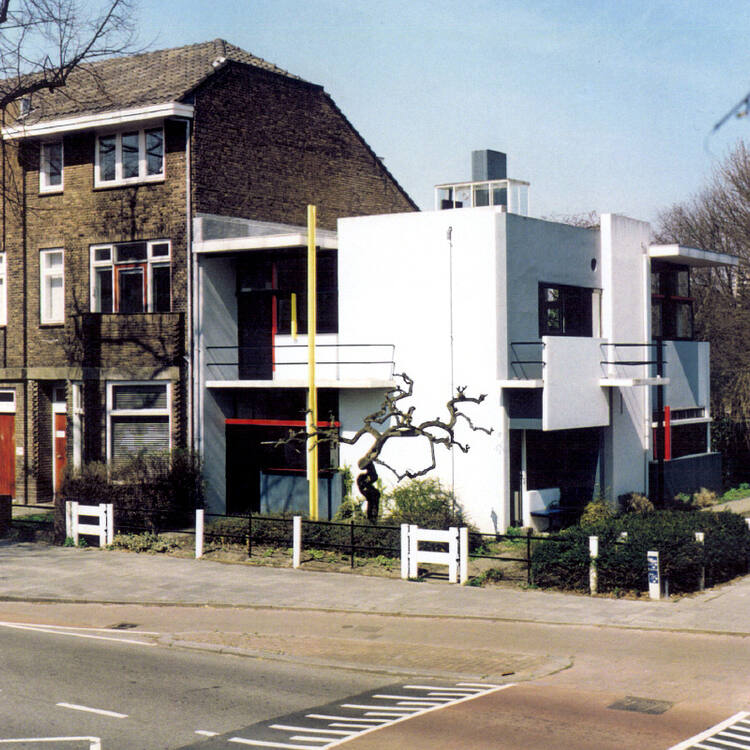 The Rietveld Schröderhuis in Utrecht was commissioned by Ms Truus Schröder-Schräder, designed by the architect Gerrit Thomas Rietveld, and built in 1924. This small one-family house, with its flexible interior spatial arrangement, and visual and formal qualities, was a manifesto of the ideals of the De Stijl group of artists and architects in the Netherlands in the 1920s, and has since been considered one of the icons of the Modern Movement in architecture.

The house is in many ways unique. It is the only building of its type in Rietveld’s output, and it also differs from other significant buildings of the early modern movement, such as the Villa Savoye by Le Corbusier or the Villa Tugendhat by Mies van der Rohe. The difference lies in particular in the treatment of architectural space and in the conception of the functions of the building. Many contemporary architects were deeply influenced by the Schröder house and this influence has endured up to the present.

The quality of the Rietveld Schröderhuis lies in its having produced a synthesis of the design concepts in modern architecture at a certain moment in time. Part of the quality of the house is the flexibility of its spatial arrangement, which allows gradual changes over time in accordance with changes in functions. At the same time the building has also many artistic merits, and its visual image has strongly influenced building design in the second half of the 20th century. The interiors and furniture are an integral part of its design and should be given due recognition.

The Rietveld Schröderhuis was located on the edge of the city of Utrecht close to the countryside, at the end of a 20th century row of houses. It was built against the wall of the adjacent brick house. The area beyond the house remained undeveloped, because it contained 19th century Dutch defence lines, which were still in use at the time.

Criterion (i): The Rietveld Schröderhuis in Utrecht is an icon of the Modern Movement in architecture and an outstanding expression of human creative genius in its purity of ideas and concepts as developed by the De Stijl movement.

Criterion (ii): With its radical approach to design and the use of space, the Rietveld Schröderhuis occupies a seminal position in the development of architecture in the modern age.

The entire Rietveld Schröderhuis is a museum. The house was carefully restored, and is now in excellent condition and under regular care of the Centraal Museum of Utrecht. The location of the house in its original setting – at the end of a row of houses in a small park – is unchanged. Since it was built, however, the context of the house has changed somewhat. Ten years after its construction, the city of Utrecht expanded onto the open land beyond the house, which was built upon. In the 1960s, a viaduct was constructed to accommodate the elevated route of the Waterlinieweg motorway near the house. After that, there were no further substantial changes to the surroundings.

The Rietveld Schröderhuis was used as a private house for sixty years and some changes were made according to the needs of its evolving use. In the 1970s and 1980s, the Rietveld Schröderhuis was restored to its original condition of the 1920s by Bertus Mulder, one of Rietveld’s assistants. The building has maintained the authenticity of its design concept and structure. The restorations of the 1970s and 1980s were done with great care, making every effort to preserve what was possible. All the original furniture was restored and positioned as in the 1920s. Missing objects were remade on the basis of records and existing evidence. Unfortunately, owing to the poor condition of some materials, it was necessary to replace the rendering as well as various fittings. The Outstanding Universal Value of this building lies in its being a realization of design concepts and ideas and a manifesto of the De Stijl movement, the restoration of the interiors to their 1920s aspect is justified in this case. In its essence, the Rietveld Schröderhuis stands the test of authenticity in relation to all required parameters.

The Rietveld Schröderhuis is listed as a national heritage site under the 1988 Monuments and Historic Buildings Act [Monumentenwet 1988]. In the Municipality of Utrecht’s zoning plan, it is designated as serving “the purposes of the community”. The immediate surroundings (garden and park) are designated as “public greenspace”.

The house is managed and maintained by the Centraal Museum, Utrecht’s municipal museum, in consultation with the Rietveld Schröderhuis Foundation. The Municipality of Utrecht is responsible for the house’s preservation. With respect to the maintenance and management of the Rietveld Schröderhuis, the policy is set out in the Centraal Museum’s general long-range maintenance plan and the Rietveld Schröderhuis Conservation and Management Plan, which also describes the policy on visitors. The maximum number of visitors permitted to be in the house at the same time – under supervision – is 12. Given the current opening hours, that means that the house welcomes some 12,000 visitors a year.

The policy aims to maintain the situation as it was when management was transferred to the Centraal Museum, as described in the nomination dossier, and therefore to preserve the house’s Outstanding Universal Value. The information centre and ticket office, which also house the visitors’ centre, are in the adjacent building at Prins Hendriklaan 50.

The construction and finishing of the house are vulnerable. For this reason, the state of maintenance is permanently monitored and the maximum number of visitors is adapted accordingly to ensure a safe use of the building. There are frequent requests to receive larger groups and short guided tours. Such requests are seldom honoured, in order to protect the house’s condition and the quality of the information. Regular maintenance of the house, for example renewing paintwork according to the original colour scheme, takes place every five years.

Once finalised, the Management Plan shall aim to provide the best possible protection for the setting of the house, and will be updated regularly.