Jongmyo is the oldest and most authentic of the Confucian royal shrines to have been preserved. Dedicated to the forefathers of the Joseon dynasty (1392–1910), the shrine has existed in its present form since the 16th century and houses tablets bearing the teachings of members of the former royal family. Ritual ceremonies linking music, song and dance still take place there, perpetuating a tradition that goes back to the 14th century. 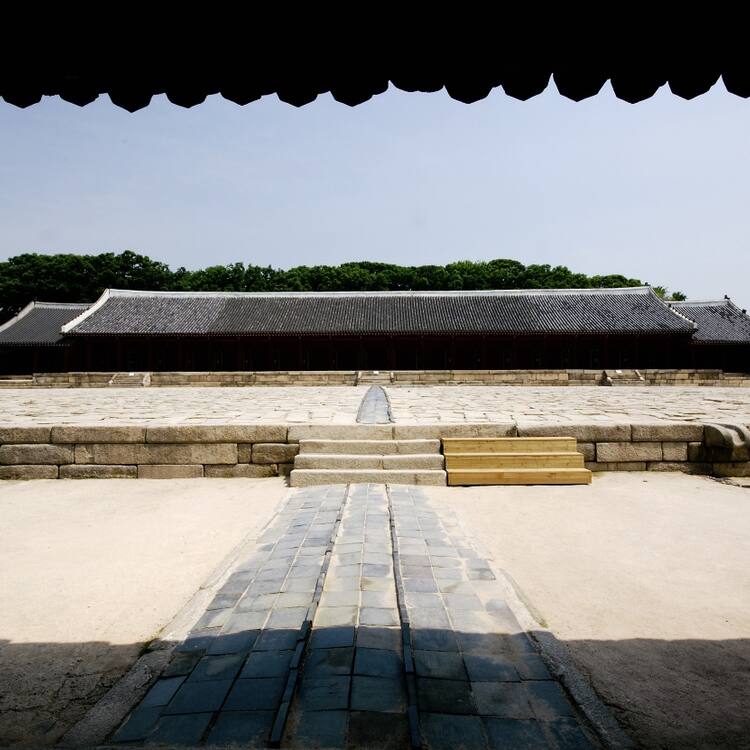 Jongmyo is a shrine housing the spirit tablets of the former kings and queens of the Joseon Dynasty. The shrine is a symbolic structure that conveys the legitimacy of the royal family, where the king visited regularly to participate in the ancestral rites to wish for the safety and security of the people and state. Jongmyo is the oldest and most authentic of the Confucian royal ancestral shrines, with a unique spatial layout that has been preserved in its entirety. It was originally built in the late 14th century, but was destroyed during the Japanese invasion during the 16th century, and was rebuilt in the early 17th century with a few expansions made to the buildings thereafter.

Jongmyo and its grounds occupy a 19.4 ha oval site. The buildings are set in valleys and surrounded by low hills, with artificial additions built to reinforce the site’s balance of natural elements, in accordance with traditional pungsu principles. The main features of Jongmyo are Jeongjeon (the main shrine), and Yeongnyeongjeon (the Hall of Eternal Peace, an auxiliary shrine). Other features include Mangmyoru, a wooden structure where the king thought about the ancestral kings in memory; Gongmingdang, the shrine to the Goryeo King Gongmin, built by the Joseon King Taejo; Hyangdaecheong, the storage building for ritual utensils; and Jaegung, a main hall with two wings, where the King and participants waited for the rites to take place. Jongmyo was built faithfully abiding by the Confucian ideology of ancestral worship and its ritual formalities under strict royal supervision, and still maintains its original form dating from the Joseon Dynasty.

Traditions of ancestral worship rites – Jongmyo Jerye, are still carried out, together with the accompanying ritual music and dance performance. Construction and management of Jongmyo, and the operations of Jongmyo Jerye rituals, are all meticulously recorded in the royal protocols of the Joseon Dynasty.

Criterion (iv): Jongmyo Shrine is an outstanding example of the Confucian royal ancestral shrine, which has survived relatively intact since the 16th century, the importance of which is enhanced by the persistence there of an important element of the intangible cultural heritage in the form of traditional ritual practices and forms.

Jongmyo Shrine is composed of a main ritual space, buildings and facilities, together with auxiliary structures and facilities that serve supportive functions in the conduct of rituals, and is surrounded by a forest. The entire complex of buildings and landscape features has been included within the boundaries of the property, and the complex is surrounded by a buffer zone.

The buildings are generally in good condition. The greatest risk factor with respect to the protection of the wooden architecture of Jongmyo is fire.

Beyond the buffer zone of the property, there is considerable modern urbanization. The construction of high-rise buildings in these areas could adversely affect site-lines within Jongmyo.

The Royal Ancestral Rite and Ritual Music of Jongmyo continue to be performed annually and are designated as an Important Intangible Cultural Heritage. The preservation of the music, dance and ritual is carried out by the National Gugak Center, and the Jongmyo Jerye Safeguarding Society.

Jongmyo maintains a high degree of authenticity, having conserved both its physical form and traditional ritual practices. The site layout and architecture of Jongmyo have been kept intact in the original form, and the ancestral ritual music and dance have been handed down and continue to be regularly performed.

Rebuilt in the 17th century, Jongmyo has been expanded twice to enshrine the increasing number of ancestors.  As with most buildings within the wooden architecture tradition of East Asia, the buildings have undergone a number of restorations involving dismantling and reconstruction. There has, however, been scrupulous respect for materials and techniques, which makes them authentic in this respect.

The entire area of Jongmyo Shrine and the individual buildings of Jeongjeon and Yeongnyeongjeon have been designated as State-designated Cultural Heritage under the Cultural Heritage Protection Act, which imposes restrictions on alterations to the property.

The area extending 100 m from the boundary of Jongmyo is protected under the Cultural Heritage Protection Act and also by the Jongno-gu district office regulation as a Historic Cultural Environment Protection Area, and all construction within the area requires approval.

At the national level, the Cultural Heritage Administration (CHA) is responsible for establishing and enforcing policies for the protection of Jongmyo, and allocating financial resources for its conservation. The Jongmyo Management Office, with a staff of approximately 25 employees, is in charge of day-to-day management of the site. Routine monitoring is carried out and in-depth professional monitoring is conducted on a 3-to-4 year basis.

Conservation work at Jongmyo is carried out by Cultural Heritage Conservation Specialists who have passed the National Certification Exams in relevant fields of expertise. The CHA is implementing the Integrated Security System Establishment Plan for the 5 Palaces and Jongmyo, in place since 2009, in preparation for accidents and/or disasters that could harm the heritage.

The general public is allowed to enter the heritage area on guided tours only, and access to the interior of the buildings is prohibited.