This property is a historic sericulture and silk mill complex established in the late 19th and early 20th century in the Gunma prefecture, north-west of Tokyo. It consists of four sites that correspond to the different stages in the production of raw silk: a large raw silk reeling plant whose machinery and industrial expertise were imported from France; an experimental farm for production of cocoons; a school for the dissemination of sericulture knowledge; and a cold-storage facility for silkworm eggs. The site illustrates Japan’s desire to rapidly access the best mass production techniques, and became a decisive element in the renewal of sericulture and the Japanese silk industry in the last quarter of the 19th century. Tomioka Silk Mill and its related sites became the centre of innovation for the production of raw silk and marked Japan’s entry into the modern, industrialized era, making it the world’s leading exporter of raw silk, notably to Europe and the United States. 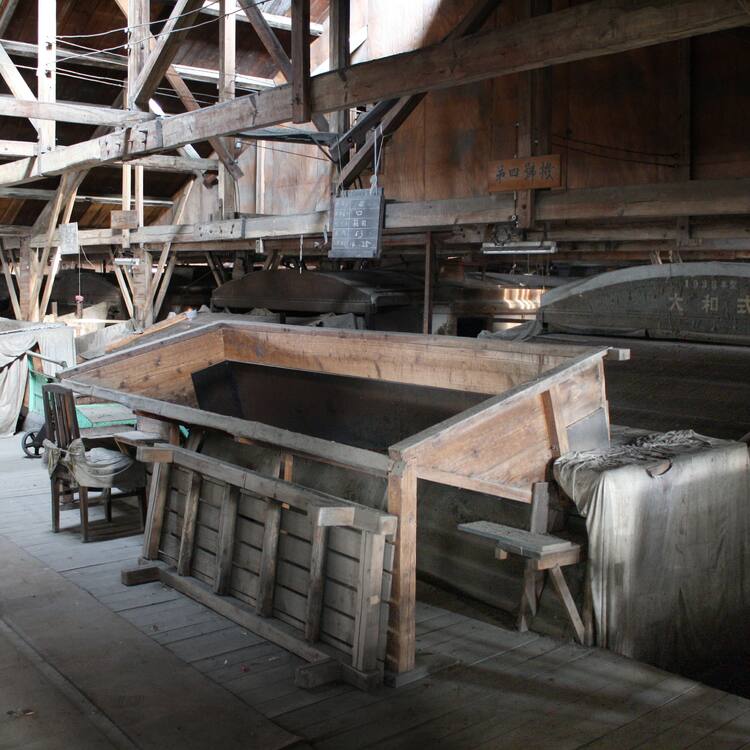 The Tomioka Silk Mill dates from the early Meiji period. With its related sites including two sericulture schools and an egg storage site, it illustrates the desire of Japan, a traditional silk producer, to rapidly access the best mass production techniques. The Japanese government imported French machinery and industrial expertise to create an integrated system in Gunma Prefecture. It included egg production, silkworm farming and the construction of a large mechanised raw silk reeling and spinning plant. In turn, the Tomioka model complex and its related sites became a decisive component in the renewal of sericulture and the Japanese silk industry, in the last quarter of the 19th century, and a key element in Japan’s entry into the modern industrialised world.

Criterion (ii): The Tomioka mill illustrates the early and entirely successful transfer of French industrial sericultural techniques to Japan. This technological transfer took place in the context of a long regional tradition of silkworm farming, which it profoundly renewed. In turn, Tomioka became a centre for technical improvements and a model that enshrined Japan’s role in the global raw silk market at the beginning of the 20th century, and which bears witness to the early advent of a shared international culture of sericulture.

Criterion (iv): Tomioka and its related sites form an outstanding example of an integrated ensemble for the mass production of raw silk. The extent of the plant, from its initial design, and the deliberate adoption of the best Western techniques illustrate a decisive period for the spread of industrial methods to Japan and the Far East. Its large, late 19th century buildings provide an eminent example of the emergence of a style of industrial architecture specific to Japan, combining foreign and local elements.

The integrity of the serial property’s composition is good, illustrating the idea of a productive complex for an intermediate textile product: raw silk. The structural and functional integrity of each of the components is more uneven and at times difficult for the visitor to understand, notably the Takayama-sha sericulture school and Arafune cold storage. The landscape integrity, as it relates to the buffer zones, requires particular attention.

The authenticity of the components presented is generally satisfactory in terms of its various dimensions of structure, form and materials. The perceived authenticity is remarkable at the Tomioka mill, which has retained its complete textile machinery. The restoration activities at the Arafune site must remain within a strictly controlled framework in terms of its authenticity, which must remain archaeological in nature.

Each of the four sites comprising the serial property is protected by Japan’s Law for the Protection of Cultural Properties. The main buildings are also protected as cultural properties of national importance. Under the application of this law, each of the sites is covered by a conservation and management plan already in place under the aegis of the cities and municipalities, including in the case of the privately owned Tajima Yahei (S2). Continuing this protection policy, the buffer zones correspond with a desire to control the urban and natural environments using measures that are, in theory, stringent. The management system relies on the competent services of the municipalities, the Commission for Cultural Affairs of the Gunma Prefecture and a series of scientific institutions involved in the regional silk heritage, and volunteer associations. The Coordination Committee, established in spring 2012, is an overarching body responsible for coordinating the actual operation.