With its five flat peaks, Mount Wutai is a sacred Buddhist mountain. The cultural landscape is home to forty-one monasteries and includes the East Main Hall of Foguang Temple, the highest surviving timber building of the Tang dynasty, with life-size clay sculptures. It also features the Ming dynasty Shuxiang Temple with a huge complex of 500 statues representing Buddhist stories woven into three-dimensional pictures of mountains and water. Overall, the buildings on the site catalogue the way in which Buddhist architecture developed and influenced palace building in China for over a millennium. Mount Wutai, literally, 'the five terrace mountain', is the highest in Northern China and is remarkable for its morphology of precipitous slopes with five open treeless peaks. Temples have been built on this site from the 1st century AD to the early 20th century. 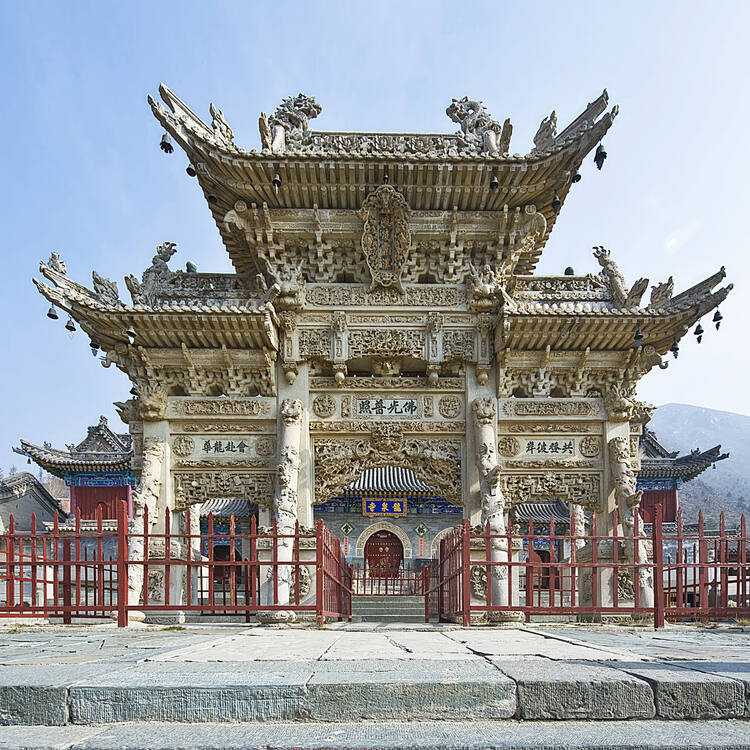 Mount Wutai with its five flat peaks is one of the four sacred Buddhist mountains in China. It is seen as the global centre for Buddhist Manjusri worship. Its fifty-three monasteries, include the East Main Hall of Foguang Temple, with life size clay sculptures, the highest ranking timber building to survive from the Tang Dynasty, and the Ming Dynasty Shuxiang Temple with a huge complex of 500 ‘suspension’ statues, representing Buddhist stories woven into three dimensional pictures of mountains and water. The temples are inseparable from their mountain landscape. With its high peaks, snow covered for much of the year, thick forests of vertical pines, firs, poplar and willow trees and lush grassland, the beauty of the landscape has been celebrated by artists since at least the Tang Dynasty – including in the Dunhuang caves. Two millennia of temple building have delivered an assembly of temples that present a catalogue of the way Buddhist architecture developed and influenced palace building over a wide part of China and part of Asia. For a thousand years from the Northern Wei period (471-499) nine Emperors made 18 pilgrimages to pay tribute to the bodhisattvas, commemorated in stele and inscriptions. Started by the Emperors, the tradition of pilgrimage to the five peaks is still very much alive. With the extensive library of books collected by Emperors and scholars, the monasteries of Mount Wutai remain an important repository of Buddhist culture, and attract pilgrims from across a wide part of Asia.

Criterion (ii): The overall religious temple landscape of Mount Wutai, with its Buddhist architecture, statues and pagodas reflects a profound interchange of ideas, in terms of the way the mountain became a sacred Buddhist place, endowed with temples that reflected ideas from Nepal and Mongolia and which then influenced Buddhist temples across China.

Criterion (iii): Mount Wutai is an exceptional testimony to the cultural tradition of religious mountains that are developed with monasteries. It became the focus of pilgrimages from across a wide area of Asia, a cultural tradition that is still living.

Criterion (iv): The landscape and building ensemble of Mount Wutai as a whole illustrates the exceptional effect of imperial patronage over a 1,000 years in the way the mountain landscape was adorned with buildings, statuary, paintings and steles to celebrate its sanctity for Buddhists.

Criterion (vi): Mount Wutai reflects perfectly the fusion between the natural landscape and Buddhist culture, religious belief in the natural landscape and Chinese philosophical thinking on the harmony between man and nature. The mountain has had far-reaching influence: mountains similar to Wutai were named after it in Korea and Japan, and also in other parts of China such as Gansu, Shanxi, Hebei and Guandong provinces.

All the temples and landscape associated with the sacred Buddhist mountain are included in the nominated area. The integrity of some of the temple ensembles was threatened by uncontrolled development but this has been either reversed or is being controlled. For the landscape, the visual integrity relies on sustaining the beauty of the mountain and its forests so that the inseparability of the temples and the mountain can be appreciated together with their religious associations. The temples demonstrate a long history of construction and reconstruction. The exception is Foguang East Hall which with its statues has remained largely unreconstructed since the Tang Dynasty. The attributes such as the assembly of temples, the specific buildings that reflect the interchange of cultures, the relationship of buildings to the mountain landscape, the beauty of the forested landscape to the northwest, the pilgrim routes and the masterpieces within the temples, could be said to clearly reflect the outstanding universal value of the property.

The following plans guide the management of the property: Conservation and Management Plan for the nominated World Heritage site (2005-2025) and the Master Plan of the Mount Wutai National Park (1987 and amended in 2005). Both plans are implemented by the National Park. A World Heritage Protection Division, part of the Wutai local administration, and provided with professional staff, will be responsible for the implementation of the Conservation and Management Plan.