Mammoth Cave National Park, located in the state of Kentucky, has the world's largest network of natural caves and underground passageways, which are characteristic examples of limestone formations. The park and its underground network of more than 560 surveyed km of passageways are home to a varied flora and fauna, including a number of endangered species. 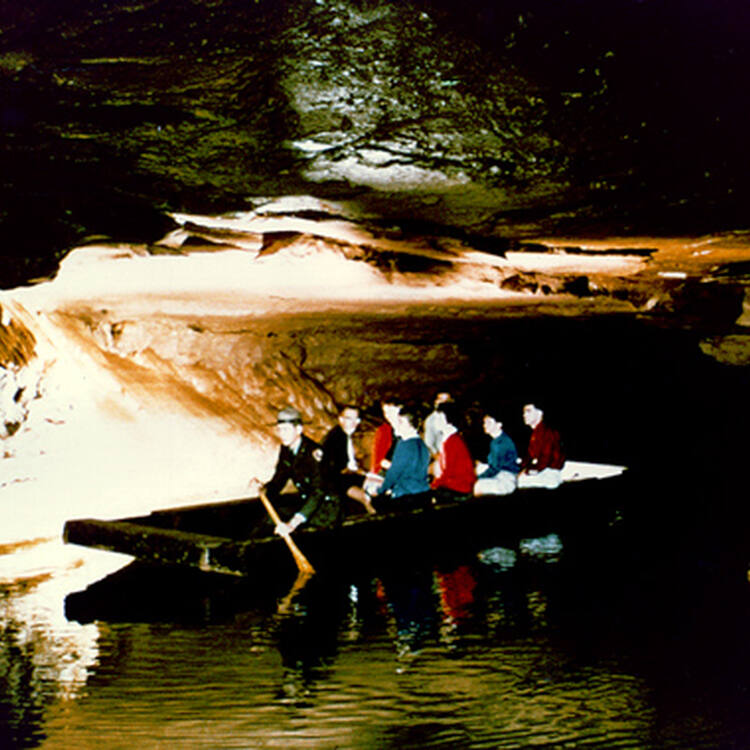 Mammoth Cave is the most extensive cave system in the world, with over 285 miles (458 km) of surveyed cave passageways within the property (and at least another 80 miles [128 km] outside the property). The park illustrates a number of stages of the Earth's evolutionary history and contains ongoing geological processes and unique wildlife. It is renowned for its size and vast network of extremely large horizontal passages and vertical shafts. Nearly every type of cave formation is known within the site, the product of karst topography. The flora and fauna of Mammoth Cave is the richest cave-dwelling wildlife known, with more than 130 species within the cave system.

Criterion (vii): Mammoth Cave is the longest cave system in the world. The long passages with huge chambers, vertical shafts, stalagmites and stalactites, splendid forms of beautiful gypsum flowers, delicate gypsum needles, rare mirabilite flowers and other natural features of the cave system are all superlative examples of their type. No other known cave system in the world offers a greater variety of sulfate minerals.

Criterion (viii): Mammoth Cave exhibits 100 million years of cave-forming action and presents nearly every type of cave formation known. Geological processes involved in their formation continue. Today, this huge and complex network of cave passages provides a clear, complete and accessible record of the world’s geomorphic and climatic changes. Outside the cave, the karst topography is superb, with fascinating landscapes and all of the classic features of a karst drainage system: vast recharge area, complex network of underground conduits, sink holes, cracks, fissures, and underground rivers and springs.

Criterion (x): The flora and fauna of the cave is the richest caverniculous wildlife known, numbering over 130 species, of which 14 species of troglobites and troglophiles are known only to exist here.

With nearly 500 km of surveyed cave passageways within the property and over 21,000 hectares above ground, the property is large enough to offer a high level of protection to the outstanding universal value for which it was inscribed.  A portion of the site has development (roads, visitor facilities, park operational and administrative infrastructure), but most of the area remains undeveloped in a natural zone.  As a national park, protection of the property’s integrity takes first priority in management decisions.

Mammoth Cave and its karst terrain face threats and challenges, most of which are from external sources.  Because large portions of the Mammoth Cave watershed lie outside park boundaries, activities conducted in these privately-owned areas greatly influence water quality and quantity within the park.  Water quality is influenced by sewage and waste disposal, farming and forestry practices, oil/gas wells, railroads and highways.  Water quantity is influenced by flood-control dams on the Green and Nolin Rivers, and a small lock and dam immediately downstream of the park.

The integrity of Mammoth Cave has been strengthened as a result of five significant measures that have been taken since Mammoth Cave National Park was inscribed in 1981:  an updated General Management Plan in 1983; the establishment of the Mammoth Cave Area International Biosphere Reserve in 1990 and subsequent expansion in 1996;  a regional sewage system, installed in the early 1990s, which serves both the park and three adjacent communities;  the establishment of the Mammoth Cave International Center for Science and Learning in 2004; and the discovery and mapping of 140 additional miles (225 km) of cave passageways over the past 31 years.

The regional sewer system has greatly increased protection of the park’s sensitive cave system by servicing most of the areas that drain into the Mammoth Cave. The 1996 expansion of the Mammoth Cave Area Biosphere Reserve to 367,993 hectares has also played an important role in securing the property’s integrity and maintaining water quality. The Biosphere Reserve now includes all or portions of six counties near Mammoth Cave National Park, encompassing the ecologically sensitive hydrological recharge area for Mammoth Cave National Park as well as a large interaction zone. This has helped address common concerns regarding water quality, has provided an impetus for protection and has reinforced the World Heritage property values inside the park in combination with the connected ecologically sensitive areas outside of the park.

In 2004, the Mammoth Cave International Center for Science and Learning was established through a partnership between Mammoth Cave National Park and Western Kentucky University.  Part of a national network of learning centers located within national parks, it facilitates the use of parks for scientific inquiry, supports science-informed decision making, and promotes science literacy and resource stewardship. The learning center has contributed to “sister park” agreements with other World Heritage sites (China and Slovenia) that protect cave and karst resources.

Fine particles of air pollution often cause haze in the park, affecting how well and how far visitors can see vistas and landmarks. Air pollutants of concern can have serious effects on park air quality, human health, wildlife, vegetation, upland ponds, streams, soils, and visibility.

Designated by the U.S. Congress in 1941 as a national park, Mammoth Cave National Park is managed under the authority of the Organic Act of August 25, 1916 which established the United States National Park Service. In addition, the park has specific enabling legislation which provides broad congressional direction regarding the primary purposes of the park. Numerous other federal laws bring additional layers of protection to the park and its resources. Day to day management is directed by the Park Superintendent.

Management goals and objectives for the property have been developed through a General Management Plan, which has been supplemented in recent years with more site-specific planning exercises as well as numerous plans for specific issues and resources. In addition, the National Park Service has established Management Policies which provide broader direction for all National Park Service units, including Mammoth Cave.

Approximately 600,000 people visit the property each year, and 400,000 of those tour Mammoth Cave. Access to the cave is strictly controlled and visitation is confined to 10 miles of developed passageway. On the surface of the park, some trail use activities produce soil erosion and equine waste.  Invasive species crowding out native plants is another area of great concern.

Protection of the site from current and potential threats will require continued monitoring of resource conditions, such as through the NPS Inventory and Monitoring program, which has developed  nine “vital signs” for the park, including five cave vital signs (aquatic biota, bats, crickets, meteorology, woodrats), forest vegetation communities, invasive species early detection, ozone/foliar injury, and water quality. Continued collaboration at the landscape scale, such as through the Biosphere Reserve, is also essential to long term protection of the site.

Counties of Barren, Edmonson, and Hart in the State of Kentucky