Situated near the southern margin of the Red River Delta, the Trang An Landscape Complex is a spectacular landscape of limestone karst peaks permeated with valleys, many of them partly submerged and surrounded by steep, almost vertical cliffs. Exploration of caves at different altitudes has revealed archaeological traces of human activity over a continuous period of more than 30,000 years. They illustrate the occupation of these mountains by seasonal hunter-gatherers and how they adapted to major climatic and environmental changes, especially the repeated inundation of the landscape by the sea after the last ice age. The story of human occupation continues through the Neolithic and Bronze Ages to the historical era. Hoa Lu, the ancient capital of Viet Nam, was strategically established here in the 10th and 11th centuries AD. The property also contains temples, pagodas, paddy-fields and small villages. 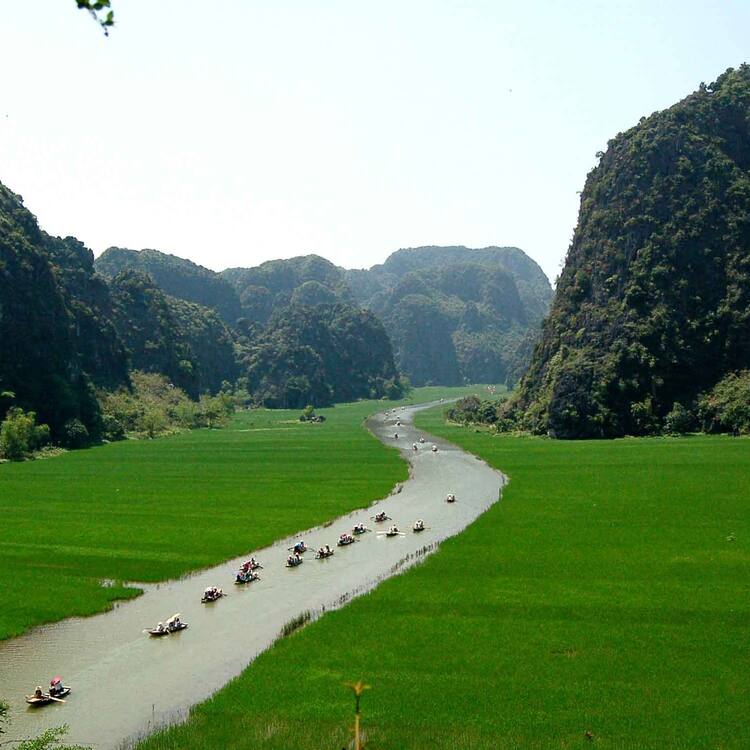 Trang An Landscape Complex © Trang An

Located within Ninh Binh Province of North Vietnam near the southern margin of the Red River Delta, the Trang An Landscape Complex (Trang An) is a mixed cultural and natural property contained mostly within three protected areas; the Hoa Lu Ancient Capital, the Trang An-Tam Coc-Bich Dong Scenic Landscape, and the Hoa Lu Special-Use Forest. The property covers 6,226 hectares within the Trang An limestone massif, and is surrounded by a buffer zone of 6,026 hectares, mostly rural land with rice paddy fields. There are about 14,000 residents, the majority of whom are families involved in subsistence agriculture, but much of the property is uninhabited and in a natural state.

Trang An is of global significance as an outstanding humid tropical tower-karst landscape in the final stages of geomorphic evolution. It is composed of a variety of classical karst cones and towers and a network of enclosed depressions connected by an intricate system of subterranean waterways, some of which are navigable by small boats. The area is unique in having been invaded by the sea several times in the recent geological past but is now emergent on land. The blend of towering mountains draped in natural rain forest, with large internal basins and narrow cave passages containing quietly flowing waters, creates an extraordinarily beautiful and tranquil landscape.

Archaeological deposits in caves reveal a regionally significant, continuous sequence of human occupation and utilization spanning more than 30,000 years. There is convincing evidence showing how early human groups adapted to changing landscapes in the massif, including some of the most extreme climatic and environmental changes in the planet’s recent history.

Criterion (v): Trang An is an outstanding locale within Southeast Asia, for demonstrating the way early humans interacted with the natural landscape and adapted to major changes in climatic, geographical and environmental conditions over a period of more than 30,000 years. The long cultural history is closely associated with geological evolution of the Trang An limestone massif in late Pleistocene and early Holocene times, when the inhabitants endured some of the most turbulent climatic and environmental changes in Earth history, including repeated submergence of the landscape due to oscillating sea levels. Within the one compact landscape there are many sites covering multiple periods and functions, comprising early human settlement systems.

Criterion (vii): The exceptionally beautiful tower-karst landscape of Trang An is dominated by a spectacular array of forest-mantled limestone rock towers up to 200m high, which are linked in places by sharp ridges enclosing deep depressions filled by waterways that are inter-connected by a myriad of subterranean cave passages.  These features all contribute to a multi-sensory visitor experience that is heightened by contrasting and ever-changing colours - the deep green tropical rainforests, grey limestone rocks and cliffs, blue-green waters and the brilliant blue of the sky, and areas of human use including the green and yellow rice paddies. Visitors, conveyed in traditional sampans rowed by local guides, experience an intimate connection with the natural environment and a relaxing sense of serenity and security. The dramatic mountains, secretive caves and sacred places in Trang An have inspired people through countless generations.

Criterion (viii): Trang An is a superb geological property that displays, in a globally exceptional way, the final stages of tower-karst landscape evolution in a humid tropical environment. Deep dissection of an uplifted limestone massif over a period of five million years has produced a series of classical karst landforms, including cones, towers, enclosed depressions (cockpits), interior-draining valleys (poljes), foot- caves and subterranean cave passages decorated with speleothems. The presence of transitional forms between ‘fengcong’ karst with ridges connecting towers, and ‘fenglin’ karst where towers stand isolated on alluvial plains, is an extremely significant feature of the property. Trang An is an unusual autogenic karst system, being rain-fed only and hydrologically isolated from rivers in the surrounding terrain.  Former inundation by the sea transformed the massif into an archipelago for some periods, though it is fully emergent on land today. Fluctuations of sea level are evidenced by an altitudinal series of erosion notches in cliffs, with associated caves, wave-cut platforms, beach deposits and marine shell layers.

The property is of sufficient size and scope to encompass almost the entire limestone massif, with a full range of classic tower-karst landforms and associated geomorphic processes. All caves and other sites known to be of archaeological significance are included. The very rugged topography has generally isolated the property from intensive occupation and utilization, and much of its interior remains in a natural state. Within the extensive natural areas of the property there are no structures that obstruct the scenery or detract from the aesthetic appeal. Occupied areas are mainly small traditional villages and associated gardens and rice paddy fields tended by subsistence farmers. The greater part of the property is enclosed within three officially designated protected areas, and contains a number of other sites protected by Government Decree. A large buffer zone surrounds the property and is designed to protect it from external impacts. It contains many small villages together with gardens, farms and rice paddies, and also the recently reconstructed Bai Dinh Pagoda complex.

Trang An is a relatively small property that supports a resident population and is host to a large and growing number of tourist visitors. Close monitoring, strict regulation and careful management will be required in the long term to avoid pressures and threats from urban expansion, resource use, village growth and excessive tourist infrastructure and use, and service development. These are among the key issues given priority attention in the property management plan.

Knowledge of the ancient inhabitants of Trang An, their culture and relationship to the landscape comes primarily from archaeological investigation and excavation in caves within the massif, which are still largely in their original condition – a rarity in Southeast Asia. The rich archaeological resources are predominantly midden accumulations containing shells, animal bones, stone tools, hearths, corded-ware pottery and occasionally human remains. The sites are yielding vivid palaeo-environmental records from analysis of pollen, seeds and plant tissue, from fauna, and from geomorphic evidence of ancient shorelines. These studies are supported by sophisticated modern techniques such as geo-chemical analysis of plant carbon isotopes and lipids, and shell oxygen isotopes, and the pioneering use in Southeast Asia of LiDAR (Light Distancing and Ranging) to create millimetre-accurate images of cave sites. All materials are professionally plotted, collected, catalogued, stored and analysed. The results of studies have been communicated through an impressive portfolio of published scientific papers, and are also reported in a definitive monograph on human adaptation in the Asian Palaeolithic, the author of which has conducted research in Trang An for almost a decade.

Trang An is State-owned and is controlled by the Ninh Binh Provincial People’s Committee. Most of the property is secured within three statutory protected areas: the Hoa Lu Ancient Capital, the Trang An-Tam Coc-Bich Dong Scenic Landscape and the Hoa Lu Special-Use Forest. Six primary national laws and a series of Government decrees provide measures for: administration and management of the property; protection of cultural heritage, monuments, relics and archaeological sites and resources; biodiversity conservation; environmental protection; eco-tourism and other commercial activities; and sustainable socio-economic development. The property is managed by the Trang An Landscape Complex Management Board, an independent agency with extensive decision-making powers, responsibilities and resources, and with close functional links to Government ministries, research institutes, and commercial and community stakeholders.

Management is guided by a comprehensive, Government-approved and legally binding management plan, prepared in consultation with the public and key stakeholders. The plan adopts a zoning system that allows for management prescriptions to be more effectively aligned to the varying protection and use requirements in different parts of the property.  A long-term lease gives delegated authority to a private company for some aspects of conservation and tourism management in the Trang An-Tam Coc-Bich Dong Scenic Landscape area.  There are four small private tourist resort operations within the property.  Ongoing management priorities include: extended monitoring and control of tourist operations; development of better visitor centres and services; ongoing research together with improved archaeological site conservation, database development, and collection, storage and display of artefacts; expansion of training, education, awareness-raising and promotion programmes; and support for social and economic development of local communities through employment opportunities, and more effective sustainable use and conservation of natural resources. 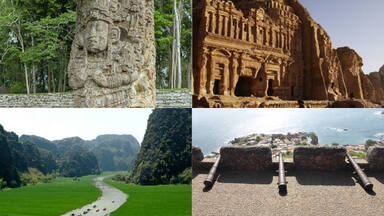 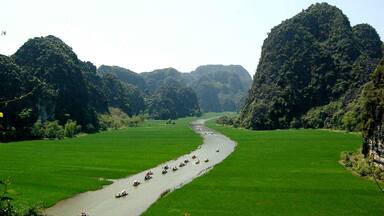