Nara was the capital of Japan from 710 to 784. During this period the framework of national government was consolidated and Nara enjoyed great prosperity, emerging as the fountainhead of Japanese culture. The city's historic monuments – Buddhist temples, Shinto shrines and the excavated remains of the great Imperial Palace – provide a vivid picture of life in the Japanese capital in the 8th century, a period of profound political and cultural change. 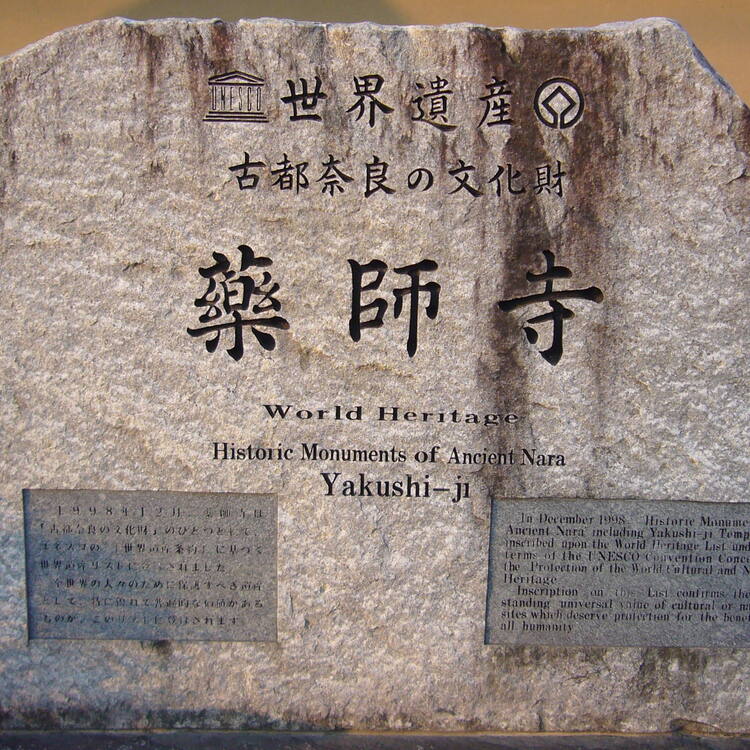 The Historic Monuments of Ancient Nara bear exceptional witness to the evolution of Japanese architecture and art and vividly illustrate a critical period in the cultural and political development of Japan, when Nara functioned as its capital from 710 to 784. During this period, the framework of national government was consolidated and Nara enjoyed great prosperity, emerging as the fountainhead of Japanese culture.

Located in the modern city of Nara, the property includes eight component parts composed of seventy-eight different buildings covering 617.0 ha, which is surrounded by a buffer zone (1,962.5 ha) and the “historic environment harmonization area (539.0 ha)”.

The site of Heijô-kyô was carefully selected in accordance with Chinese geomantic principles. A grand city plan, based on Chinese examples such as Chang'an, was laid out, with palaces, Buddhist temples, Shinto shrines, public buildings, houses, and roads on an orthogonal grid. The palace itself, located at the northern end of the central avenue, occupied 120 ha. It comprised the official buildings where political and religious ceremonies took place, notably the Daigokuden (imperial audience hall) and Chôdô-in (state halls), and the imperial residence (Dairi), together with various compounds for administrative and other purposes.

The component parts include an archaeological site (the Nara Palace Site), five Buddhist temples (the Tôdai-ji, the Kôfuku-ji, the Yakushi-ji, the Gangô-ji and the Tôshôdai-ji), a Shinto shrine (the Kasuga-Taisha) and an associative cultural landscape (the Kasugayama Primeval Forest), the natural environment which is an integral part of all Shinto shrines. Together, these places provide a vivid and comprehensive picture of religion and life in the Japanese capital in the 8th century, a period of profound political and cultural change.

Criterion (ii): The historic monuments of Ancient Nara bear exceptional witness to the evolution of Japanese architecture and art as a result of cultural links with China and Korea which were to have a profound influence on future developments.

Criterion (iii): The flowering of Japanese culture during the period when Nara was the capital is uniquely demonstrated by its architectural heritage.

Criterion (iv): The layout of the Imperial Palace and the design of the surviving monuments in Nara are outstanding examples of the architecture and planning of early Asian capital cities.

Criterion (vi): The Buddhist temples and Shinto shrines of Nara demonstrate the continuing spiritual power and influence of these religions in an exceptional manner.

Historic Monuments of Ancient Nara include the group of buildings of the Buddhist temples representing this historic city, the harmonious cultural landscape of the sacred forest and the Shinto shrine, demonstrating traditional worship in Japan, and an archaeological site. These essential component parts of the property illustrate Japanese political structure and cultural tradition in the 8th century. Each component part has an adequate buffer zone, and thus the integrity of the property is ensured in the contexts of both wholeness and intactness.

Since the World Heritage Committee expressed concern in 2003 about the negative impact on the buried cultural resources at Nara Palace Site caused by changing groundwater levels due to the Yamato-Kita Road highway construction, government intervention and monitoring has been ongoing. The State Party is currently addressing the visual impact of the planned new visitor facilities at Nara Palace site.

Restoration work on the buildings of ancient Nara began in the late 19th century after the enactment of the Ancient Shrines and Temples Preservation Law (1897). The Kasuga-Taisha Shinto shrine has maintained its tradition of routine reconstruction.

The level of authenticity of the various buildings on the property is high from the view of form and design, materials and substance, traditions and techniques, and location and setting. Japanese conservation principles have ensured that replacement of damaged or degraded architectural elements has respected the materials and techniques used by the original builders. The archaeological site of the Nara Palace Site, protected for a long period under cultivated rice fields, has also a high level of authenticity in form, materials and substance, and location and setting. Unearthed archaeological remains have been reburied for protection.

There has been some reconstruction of the gate, the study hall, and the garden at the Nara Palace Site. The continuity of traditional architecture in Japan and the substantial amount of data recovered by archaeological excavation has ensured that the reconstructed buildings have a high level of authenticity in form and design. The State Party is currently addressing how to best maintain that continuity in ongoing reconstruction work emphasizing the need for a clear rationale and justification for all interventions.

The Kasugayama Primeval Forest has been preserved as a sacred forest where no hunting or tree-felling has been permitted since 841. Thus it retains a high level of authenticity in location and setting, and spirit and feeling.

All the component parts are designated as National Treasures, a Special Natural Monument, a Special Site, and etc. under the 1950 Law for the Protection of Cultural Properties.

The places of worship (the Buddhist temples and the Shinto shrine) are owned by their respective religious communities, and the state of conservation is strong. Nara Prefecture has the responsibility of managing and protecting the Kasugayama Primeval Forest, and the Nara Palace Site has been maintained in collaboration with the Japanese government and Nara Prefecture. In particular, the Nara Palace Site and its buffer zone have been parts of a National Government Park since 2008, and maintenance projects are continuously planed with the aim of appropriately protecting and utilizing the archaeological site.

There are clearly defined and adequate buffer zones around all the component parts. These are provided for in the 1950 Law for the Protection of Cultural Properties, the Ancient Capitals Preservation Act, and various prefectural and municipal regulations.