The List Archaeological Landscape of the First Coffee ...
Print

The remains of the 19th-century coffee plantations in the foothills of the Sierra Maestra are unique evidence of a pioneer form of agriculture in a difficult terrain. They throw considerable light on the economic, social, and technological history of the Caribbean and Latin American region. 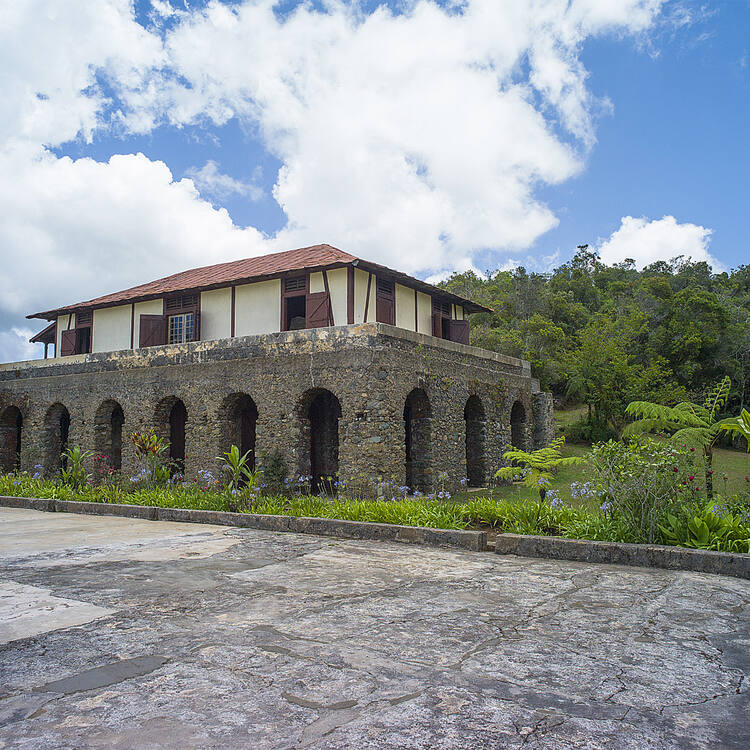 The First Coffee Plantations in the Southeast of Cuba is a cultural landscape illustrating colonial coffee production from the 19th to early 20th centuries. It includes not only the architectural and archaeological material evidence of 171 old coffee plantations or cafetales, but also the infrastructure for irrigation and water management, and the transportation network of mountain roads and bridges connecting the plantations internally and with coffee export points. The topography, dominated by the steep and rugged slopes of the Sierra Maestra foothills, speaks to the plantation owners’ (primarily of French and Haitian origin) ingenuity in their exploitation of the natural environment through the sweat and blood of their African slaves. The inscribed property occupies a total area of 81,475 hectares within the two provinces of Guantanamo and Santiago de Cuba. The Sierra Maestra Grand National Park encompasses the area of the inscribed property located in Santiago de Cuba.

The Landscape of the First Coffee Plantations in the Southeast of Cuba has survived intact primarily due to the fact that the area was mostly abandoned in the early 20th century as this region’s traditional coffee growing techniques were increasingly unable to compete with new methods adopted elsewhere in Latin American. The large area included within the inscribed property, of 171 plantations in over 800 square kilometres, has permitted the preservation of a cultural landscape for coffee production from the agricultural level, to its processing, and the roads, trails and bridges that linked the product to market. Individual plantations include the owner’s house (often based on Basque traditions), aqueducts, flourmills, fermentation tanks, drying sheds, and barracks.

Current threats to the inscribed property are primarily due to its status as a largely abandoned archaeological site and the reclamation of the landscape by nature. Efforts have been made to clear and fence plantations in order to protect them from intrusions. The region is an active tectonic zone with a history of earthquakes. In future, this area may come under increased threat from uncontrolled tourism and the exploitation of natural resources although currently accessibility to the majority of the cultural properties is very limited due to its isolation. Additional potential threats to the site are the possible effects of climate change on coffee plantations, particularly drought.

The cafetales within the inscribed area illustrate a rich and complete history of an era of agricultural industry with significant material cultural. Surviving evidence includes examples of the ingenious system aqueducts and viaducts as well as of cisterns and mills used to pulp the berries required for the wet system of coffee production.  Plantation owners typically were of French or Haitian origin and created a distinct regional culture in their music, dance and gastronomy which continues to survive.

Authenticity during the restoration process is maintained through careful excavation and study of some fifty archaeological sites along with the examination of written documentation such as wills, diaries, travellers’ accounts in Cuban and French archives.

The abandoned plantations exist in a variety of states of restoration. While the plantations have common features, each is distinct with its own unique elements.

Restoration projects undertaken at various plantations have been based on detailed archaeological and documentary research and applied authentic materials and techniques. Such projects have included the development of La Isabelica museum in the 1960s, and more recently the owner’s house at Ti Arriba plantation museum and the garden at San Juan de Escocia. Some of the original road infrastructure has been upgraded although most remain in their original form as simple mule tracks and footpaths.

The components of the inscribed property are owned by the Cuban government through various institutions of the Ministry of agriculture (Minagri). The national government provides for legal protection and conservation of the system of ruins from the French coffee plantation settlements through the National Monuments Commission. At the provincial level, this is the responsibility of the Provincial Cultural Heritage Centres with the involvement of the Santiago City Curator’s Office.

Strong legislative protection is in force in the region, in particular within the Sierra Maestra Grand National Park (1980). Plantations within Guantanamo Province have special protection as part of regional planning regulations as part of the Nipe-Sagua-Baracoa mountain ridge area.

Tourism development plans are focused on controlled tourism in defined areas linked by footpaths where motorized transportation is not possible. Additional undertakings, designed to improve the region’s socio-economic situation, have included economic development and soil use studies.

Exceptionally, the inscribed property does not include a buffer zone due to its extent of territory covered with the inclusion of the 171 plantations along with the landscape between them.