The List Castle of the Teutonic Order in Malbork
Print

Castle of the Teutonic Order in Malbork

Castle of the Teutonic Order in Malbork

This 13th-century fortified monastery belonging to the Teutonic Order was substantially enlarged and embellished after 1309, when the seat of the Grand Master moved here from Venice. A particularly fine example of a medieval brick castle, it later fell into decay, but was meticulously restored in the 19th and early 20th centuries. Many of the conservation techniques now accepted as standard were evolved here. Following severe damage in the Second World War it was once again restored, using the detailed documentation prepared by earlier conservators. 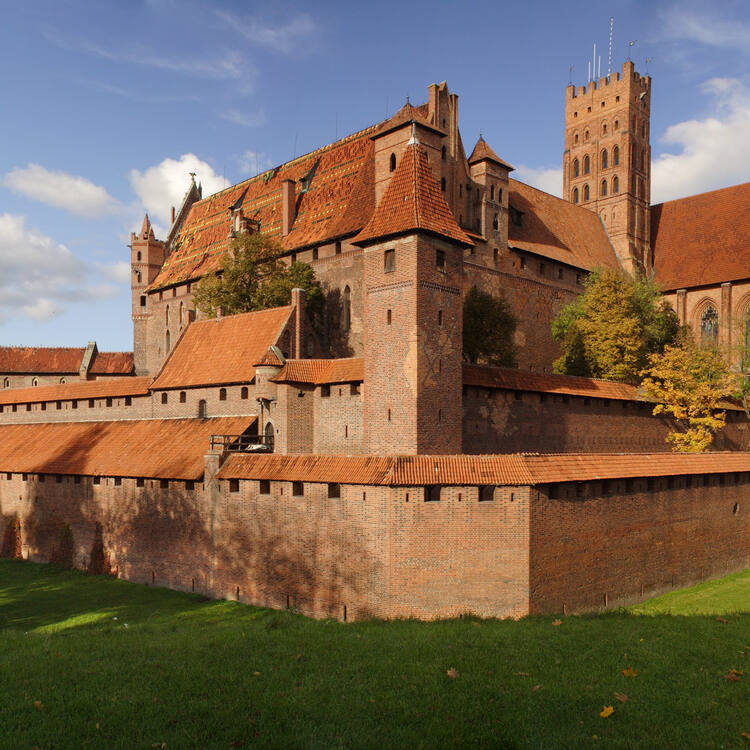 Malbork Castle is located in the north of Poland, on the east bank of the River Nogat. It is the most complete and elaborate example of a Gothic brick-built castle complex in the characteristic and unique style of the Teutonic Order. The style exemplified here evolved independently from those which prevailed in contemporary castles in western Europe and the Near East. This spectacular fortress bears witness to the phenomenon of the Teutonic Order state in Prussia. The state was founded in the 13th century by German communities of military monks who carried out crusades against the pagan Prussians and Lithuanians living on the south Baltic coast, as well as against the Christian Kingdom of Poland. It reached its greatest influence in the 14th century. The castle-convent embodies the drama of late medieval Christianity, straining between extremes of sanctity and violence.

Since the second half of the 18th century, Malbork Castle has provided one of the major sources of fascination with European medieval history and its material remains. Its recent past also illustrates the tendency to treat history and its monuments as instruments in the service of political ideologies.

From the 19th century to the present day, Malbork Castle has been the subject of restoration work that has made an exceptional contribution to the development of research and conservation theory and practice in this part of the world. During the course of this work many forgotten medieval art and craft techniques have been rediscovered. Extensive conservation works were carried out in the 19th and early 20th centuries. Following the severe damage it incurred in the final stage of the Second World War, the castle was restored once again.

Apart from its legacy as a material remain, Malbork Castle is also deeply rooted in social consciousness as a significant and emotional symbol of the history of Central Europe.

Criterion (ii): Malbork Castle is an architectural work of unique character. Many of the methods used by its builders in handling technical and artistic problems greatly influenced not only subsequent castles of the Teutonic Order, but also other Gothic buildings in a wide region of north-eastern Europe. The castle also provides perfect evidence of the evolution of modern philosophy and practice in the field of restoration and conservation. It is a historic monument to conservation itself, both in its social aspect and as a scientific and artistic discipline.

Criterion (iii): Malbork Castle, a symbol of power and cultural tradition, is the most important monument to the monastic state of the Teutonic Order, a unique phenomenon in the history of Western civilization. The Castle is at the same time the major material manifestation of the Crusades in eastern Europe, the compulsory conversion to Christianity of the Baltic peoples, and the colonization of their tribal territories, which played a vital role in the history of Europe.

Criterion (iv): Malbork Castle is an outstanding example of the castles of the Teutonic Order, which evolved on the frontiers of medieval western Europe. It is a unique, perfectly planned architectural creation, with no equivalent in Gothic architecture. It was built utilizing a rich repertoire of medieval construction methods; these were applied on an exceptionally large scale and resulted in making a magnificent seat for the Grand Master of the Teutonic Order.

The boundaries of the 18 ha Castle of the Teutonic Order in Malbork encompass all the elements necessary to sustain the Outstanding Universal Value of the monumental castle complex, characterised by a tripartite layout comprising the High Castle, the Middle Castle, and the Outer Bailey, each clearly delineated while at the same time integrally interconnected.

The distinctive western and eastern panoramas of the castle complex also remain intact.

Other equally important attributes of Malbork, illustrating its significance as the seat of the Grand Masters of the Teutonic Order, are individual buildings of the castle complex. The most important among them are two masterpieces of Gothic architecture: the Grand Masters’ Palace and the Great Refectory in the Middle Castle. The functioning of the capital of the monastic state in Prussia is also superbly illustrated by the remaining parts of the Middle Castle, as well as the High Castle, which used to serve as the principal monastery of the Teutonic Convent in Prussia. The High Castle takes the form of a fully evolved, quadrilateral Teutonic stronghold complete with a conventual chapel (the Church of the Virgin Mary) and other monastic rooms. A unique architectural feature is the Dansker – a latrine tower first developed at Malbork and subsequently copied at other castles within the monastic state. Malbork’s castle complex has also retained a clearly demarcated Outer Bailey, delineated by a series of defensive walls and moats. The Outer Bailey features a number of extant buildings which were of significance for the functioning of the Order’s capital. These include the armoury known as the Karwan and the defensive towers, the most important of which are the Maślankowa and the Bridge towers.

The overall authenticity of the Castle of the Teutonic Order in Malbork in its present form is very high, particularly regarding its location and setting, forms and designs, and materials and substances. The fully preserved medieval features of the castle complex are its tripartite architectural and functional layout, the clearly delimited though interrelated units of High Castle, Middle Castle, and Outer Bailey, the spatial layouts of the High and Middle castles, and the grounds of the Outer Bailey, as well as two masterpieces of Gothic architecture: the Grand Masters’ Palace and the Great Refectory in the Middle Castle.

The remaining elements of the castle complex were largely reconstructed during works carried out at the turn of the 19th and early 20th centuries and after the Second World War.

Key examples of late 19th-century conservation methods include the interiors of the High Castle: the Chapter House (with its accurately reconstructed vaulted ceiling, into which medieval details have been impeccably fitted), the Grand Masters’ sepulchral chapel, the kitchen, the dignitaries’ chambers, the dormitories, the refectory, and the common room. Conservation feats of the early 20th century are principally demonstrated by buildings in the Middle Castle: St Catherine’s Chapel, St Bartholomew’s Chapel, the Grand Commander’s Chambers, and the infirmary, as well as by parts of the Outer Bailey, including St Lawrence’s Chapel, the towers on Plauen’s Bulwark and the New Gate. The post-Second-World-War reconstruction of Malbork Castle is characterised by the great care which was taken to use the extensive and detailed records of the castle’s conservation and restoration carried out in the late 19th and early 20th centuries. Contemporary reconstruction projects have led to the reinstatement of features dating from that period, thus conferring an authenticity relating to the evolution of the precepts and practice of restoration and conservation.

The Castle of the Teutonic Order in Malbork is subject to the highest level of legal protection at the national level in Poland (through its entry in the National Heritage Register and its status as a Monument of History), and by regulations pertaining to museums, implemented by the state monument protection services. Since 1961, the complex has been administrated by a national museum directly subordinate to the Ministry of Culture and National Heritage. The museum has at its disposal highly qualified conservation and education services and appropriate funds, making it possible to carry out suitable conservation tasks and to conduct educational and popularization events. The museum’s activity is controlled by the Ministry of Culture and National Heritage and the national conservation services.

Sustaining the Outstanding Universal Value, authenticity, and integrity of the property over time requires continuing the policies of conservation implemented at the Malbork castle complex since the mid-19th century in order to preserve the spatial and functional layout of the fortress, its panoramas, and the historic architectural features of the castle. In order to safeguard the integrity of the castle complex with its surroundings, and to preserve the character of this property, it is necessary for all of the stakeholders involved to cooperate closely. This cooperation should secure the effective protection of the complex in local planning documents.

play_arrow Castle of the Teutonic Order in Malbork (UNESCO/NHK)