The colonial town of Cienfuegos was founded in 1819 in the Spanish territory but was initially settled by immigrants of French origin. It became a trading place for sugar cane, tobacco and coffee. Situated on the Caribbean coast of southern-central Cuba at the heart of the country’s sugar cane, mango, tobacco and coffee production area, the town first developed in the neoclassical style. It later became more eclectic but retained a harmonious overall townscape. Among buildings of particular interest are the Government Palace (City Hall), San Lorenzo School, the Bishopric, the Ferrer Palace, the former lyceum, and some residential houses. Cienfuegos is the first, and an outstanding example of an architectural ensemble representing the new ideas of modernity, hygiene and order in urban planning as developed in Latin America from the 19th century. 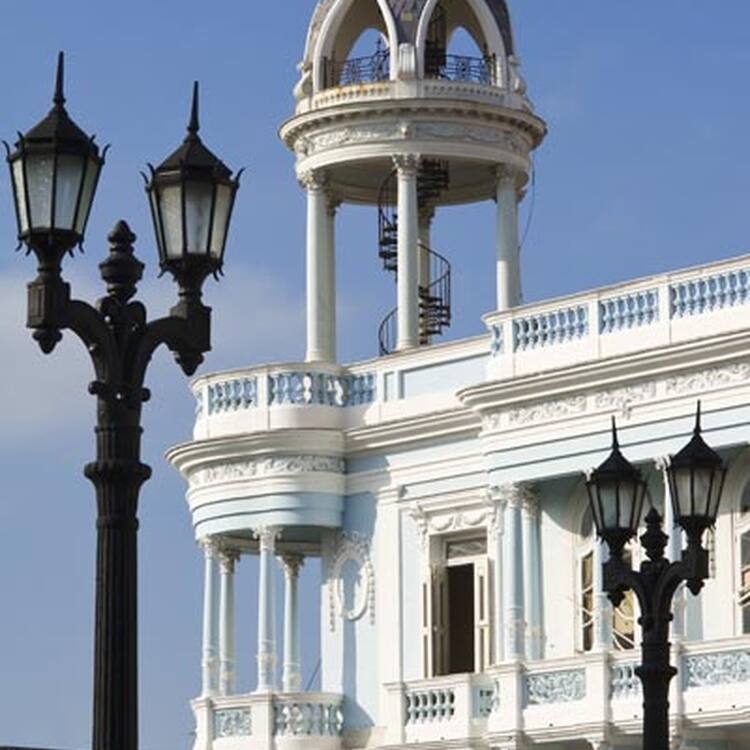 Cienfuegos was established in 1819 on the Caribbean coast of south central Cuba. Although located in Spanish territory, many of its first settlers were of French origin from Bordeaux and French colonies such as Louisiana. A commercial port town, located in the heart of a fertile agricultural region producing sugar, cane, mango, tobacco and coffee, its prosperity was primarily linked to the 19th-century sugar boom. By the 1860s, Cienfuegos was the third most important city in Cuba, by economical wealth.

The city's original centre was composed of 25 blocks, laid out in a grid plan with absolute geometric regularity, inspired by the Spanish Enlightenment. As an example of modern urbanism in Spanish American, this planned town reflected new socio-economic and cultural trends related to urban order, the role of public spaces, and public hygiene requirements for natural light and ventilation.

Public functions were focused on Parque José Martí (formerly Square of Arms) the site of the church and public and government buildings. Notable amongst the 19th-century Neoclassical buildings are the Santa Iglesia Catedral de la Purísima Concepción (Holy Church Pure Concepción Cathedral), the Tomás Terry Theater, the Spanish Casino, Palatino Tavern (or White Palace), the House Lions, "The Union" Hotel, the house-warehouse of the Spanish merchant José García of the Noceda, and the Customs Building.

Buildings dating from the early 20th century followed a more eclectic design but maintained certain proportions, construction materials and stylistic features creating harmony. residential buildings, for example, are one or two storey’s in height with plain facades, generally without porches. Masterful metalwork of wrought and cast iron is present in elegant grills, railings and fences.

The inscribed historic centre covers 70 hectares surrounded by a buffer zone of 105 hectares that extends south along the eastern side of the port.

Criterion (ii): The Historic town of Cienfuegos exhibits an important interchange of influences based on the Spanish Enlightenment, and its is an outstanding early example of their implementation in urban planning in Latin America, in the 19th century.

Criterion (iv): Cienfuegos is the first and an outstanding example of an architectural ensemble representing the new ideas of modernity, hygiene and order, in urban planning as these developed in the Latin America, from the 19th century.

The historic centre of Cienfuegos has retained its early 19th century urban fabric to a high degree. The grid plan defined the city's formal composition and spatial structure of plazas, square and wide avenues and has been respected and extended as the city grew beyond its original 25 block design. Integrity is also evident in the retention of many 19th century buildings along with the minimal alterations to the original building stock. Moreover, later buildings have largely respected the established height and general design proportions creating an overall harmony.

One of the greatest threats to the historic centre is the pace of urban growth. To date, the historic core has retained its form and has not undergone any drastic changes. Due to its situation as a coastal community in a tropical region, Cienfuegos is at the risk of natural disasters such as hurricanes.

The historic centre of Cienfuegos continues to functions as a vital urban area, the heart of the modern city. It has retained its original grid pattern an Illustration of the philosophical ideas of the Spanish Enlightenment on which it was based. The continuity of its urban form is visible its present spatial structure with the larger piazzas, smaller squares, wide streets, and streetscapes of classically-styles residences.

Authenticity of the building stock within the inscribed area has been maintained in part through the use of traditional building material and construction techniques in both the rehabilitation and renovation of original building and new development. Consistency of use is evident throughout the area, in particular through the retention of port facilities and warehouses that speak to its ongoing value as a commercial port.

As the city on the island whose founders were French, Cienfuegos has preserved a cultural link to these early settlers not only with the visible urban fabric but intangibly within an ethnic mix that also includes Spanish, African and Chinese heritage.

Legal protection exists at both the national and municipal levels. At the national level, principal legislation includes Protection of Cultural Heritage (1977), the law for National and Local Monuments (1977), and the 1995 declaration of Urban Historic Centre of Cienfuegos as a national monument. Additional protection includes Territorial Classification and Urban development (2001) and archaeological site preservation and conservation through the National Commission of Monuments of the Ministry of Culture (1979). The municipal government is also responsible for regular monitoring of the historic centre with the participation of several provincial level organizations.

A management plan for Cienfuegos, completed in 2004, provides some policy to address areas of urban growth and tourism. The “interventions program” includes several levels of appropriate intervention including restoration of historic buildings with new compatible uses and infill construction in empty lots. The Office of Monuments and Historic Sites manages municipal legislation as well as development and management plans that focus on actions of inventory, conservation and restoration. Specifically, this body provides support at all levels of rehabilitation from research to support and training courses related to traditional building techniques and materials.