This famous Buddhist temple, dating from the 8th and 9th centuries, is located in central Java. It was built in three tiers: a pyramidal base with five concentric square terraces, the trunk of a cone with three circular platforms and, at the top, a monumental stupa. The walls and balustrades are decorated with fine low reliefs, covering a total surface area of 2,500 m2. Around the circular platforms are 72 openwork stupas, each containing a statue of the Buddha. The monument was restored with UNESCO's help in the 1970s. 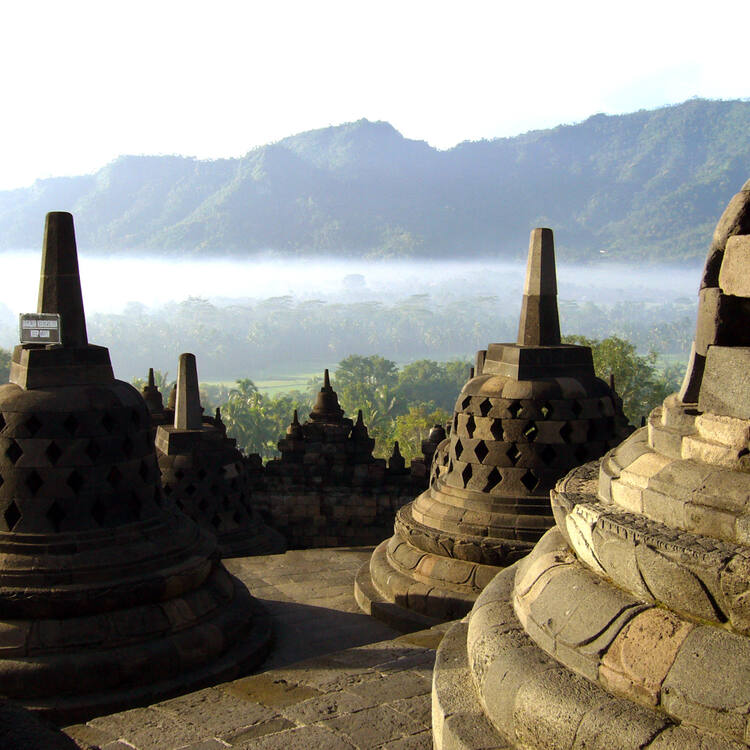 The Borobudur Temple Compounds is one of the greatest Buddhist monuments in the world, and was built in the 8th and 9th centuries AD during the reign of the Syailendra Dynasty. The monument is located in the Kedu Valley, in the southern part of Central Java, at the centre of the island of Java, Indonesia.

The main temple is a stupa built in three tiers around a hill which was a natural centre: a pyramidal base with five concentric square terraces, the trunk of a cone with three circular platforms and, at the top, a monumental stupa. The walls and balustrades are decorated with fine low reliefs, covering a total surface area of 2,520 m2. Around the circular platforms are 72 openwork stupas, each containing a statue of the Buddha.

The vertical division of Borobudur Temple into base, body, and superstructure perfectly accords with the conception of the Universe in Buddhist cosmology. It is believed that the universe is divided into three superimposing spheres, kamadhatu, rupadhatu, and arupadhatu, representing respectively the sphere of desires where we are bound to our desires, the sphere of forms where we abandon our desires but are still bound to name and form, and the sphere of formlessness where there is no longer either name or form. At Borobudur Temple, the kamadhatu is represented by the base, the rupadhatu by the five square terraces, and the arupadhatu by the three circular platforms as well as the big stupa. The whole structure shows a unique blending of the very central ideas of ancestor worship, related to the idea of a terraced mountain, combined with the Buddhist concept of attaining Nirvana.

The Temple should also be seen as an outstanding dynastic monument of the Syailendra Dynasty that ruled Java for around five centuries until the 10th century.

The Borobudur Temple Compounds consists of three monuments: namely the Borobudur Temple and  two smaller temples situatued to the east on a straight axis to Borobudur. The two temples are Mendut Temple, whose depiction of Buddha is represented by a formidable monolith accompanied by two Bodhisattvas, and Pawon Temple, a smaller temple whose inner space does not reveal which deity might have been the object of worship. Those three monuments represent phases in the attainment of Nirvana.

The temple was used as a Buddhist temple from its construction until sometime between the 10th and 15th centuries when it was abandoned. Since its re-discovery in the 19th century and restoration in the 20th century, it has been brought back into a Buddhist archaeological site.

Criterion (i): Borobudur Temple Compounds with its stepped, unroofed pyramid consisting of ten superimposing terraces, crowned by a large bell-shaped dome is a harmonious marriage of stupas, temple and mountain that is a masterpiece of Buddhist architecture and monumental arts.

Criterion (ii): Borobudur Temple Compounds is an outstanding example of Indonesia’s art and architecture from between the early 8th and late 9th centuries that exerted considerable influence on an architectural revival between the mid-13th and early 16th centuries.

Criterion (vi): Laid out in the form of a lotus, the sacred flower of Buddha, Borobudur Temple Compounds is an exceptional reflection of a blending of the very central idea of indigenous ancestor worship and the Buddhist concept of attaining Nirvana. The ten mounting terraces of the entire structure correspond to the successive stages that the Bodhisattva has to achieve before attaining to Buddhahood.

The boundaries contain the three temples that include the imaginary axis between them. Although the visual links are no longer open, the dynamic function between the three monuments, Borobudur Temple, Mendut Temple, and Pawon Temple is maintained.

The main threat to the ensemble is from development that could compromise the extraordinary relationship between the main monument and its wider setting and could also affect the Outstanding Universal Value of the property. The approach to the property has to a degree already been compromised by weak developmental regulations.

Tourism also exerts considerable pressure on the property and its hinterland.

There is a growing rate of deterioration of the building stone, the cause of which needs further research. There is also a small degree of damage caused by unsupervised visitors.

The eruption of Mount Merapi is also considered as one of the potential threats because of its deposit acidic ash as happened in 2010.

The original materials were used to reconstruct the temple in two phases in the 20th century: after the turn of the century and more recently (1973-1983). Mostly original materials were used with some additions to consolidate the monument and ensure proper drainage which has not had any significant adverse impact on the value of the property. Though the present state of Borobudur Temple is the result of restorations, it retained more than enough original material when re-discovered to make a reconstruction possible.

Nowadays the property could be used as a Buddhist pilgrimage site. Its overall atmosphere is, however, to a certain degree compromised by the lack of control of commercial activities and the pressure resulting from the lack of an adequate tourism management strategy.

The protection of the property is performed under Indonesian Law No. 11/2010 concerning Cultural Heritage and its surrounding cultural landscape. It is executed under a National Strategic Area and the Spatial Management Plan by the Ministry of Public Works in accordance with the Law concerning Spatial Management No. 26/2007 and Governmental Regulation No. 26/2008 concerning National Spatial Planning and will be enforced further by another presidential regulation regarding the Management for the Borobudur National Strategic Area that is still being drafted by the Ministry of Public Works.

The legal and institutional framework for the effective management of the property is regulated by a Presidential Decree Number 1 Year 1992. The established zones within the World Heritage property are respectively under the responsibility of the Borobudur Heritage Conservation Office under Ministry of Education and Culture, of state-owned institute PT. Taman Wisata Candi Borobudur under the Ministry of Enterprises, and of the local governments (Magelang Regency and Central Java Province). A study on the integrated management of Borobudur Temple Compounds has been conducted, including attention for the ecosystem, social and cultural aspects, ecotourism, public and private partnership and organisational feasibility study. This study is the basis of the still to be developed visitor management approach.

In order to ensure consistency between the 1992 Presidential Decree and the 1972 JICA Master Plan zone-system indicated in the World Heritage nomination dossier and to strengthen the regulations regarding development, a New Presidential Regulation is still being formulated by a Coordinating Board (14 Ministries and local authorities as well as representatives of local communities) and by formalizing the role of the proposed Management Board into the wider zones. In addition, the protection of the property has been ensured by the regular financial contribution by the national budget.

Monitoring programs has been effectively executed to monitor the growing rate of deterioration of building stone and also damage by unsupervised visitors. A research is being conducted to determine the long- term impact of deposit acidic ash of eruption of Mount Merapi to set further protection and conservation management of the property. Furthermore, a risk preparedness plan will be formulated in 2012.

The Borobudur Heritage Conservation Office has conducted community development programs targeting especially at the youth to raise their awareness. In improving and empowering local community as specialist guide for Borobudur Temple Compounds, several training programs have been conducted. The community development related to economical sector (small enterprises that produce traditional handicrafts, culinaries, etc) have already being conducted by the municipalities of Magelang Regency and Central Java Province. 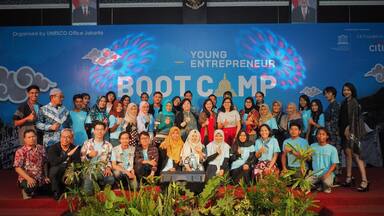 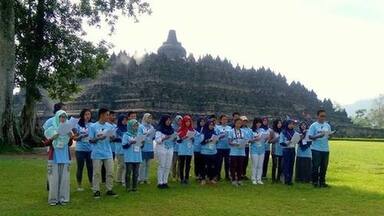