The cultural landscape of the Hortobágy Puszta consists of a vast area of plains and wetlands in eastern Hungary. Traditional forms of land use, such as the grazing of domestic animals, have been present in this pastoral society for more than two millennia. 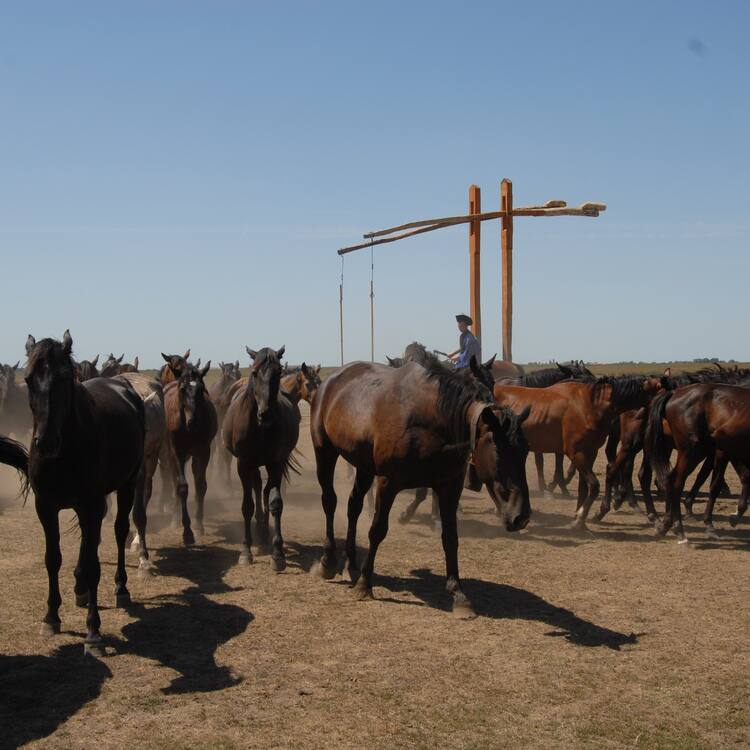 The nearly 75 000 ha area of the World Heritage property “Hortobágy National Park – the Puszta”, located on the Great Hungarian Plain in the eastern part of Hungary, is an outstanding example of a cultural landscape which preserves intact and visible evidence of its traditional pastoral use over more than two millennia and represents the harmonious interaction between people and nature. The Puszta consists of vast plains where specific land-use practices such as animal husbandry, including grazing of hardy livestock breeds adapted to the natural conditions of alkaline pastures, steppes, meadows and wetlands.

Significant scientific discoveries made since the inscription of the property attest that treeless alkaline grasslands dominated the landscape from the end of the Pleistocene period. The open character of the Hortobágy, suitable for their grazing practices, presented adequate conditions for the settlement and population of the region. Numerous peoples migrated from the east into the Carpathian Basin in prehistory. The nomadic groups that arrived around 2000 BC were the first to leave their imprint on the natural landscape in the form of many burial mounds (kurgans), mostly found on dry land, but located near a source of water. They were often used for secondary burials by later peoples, and in some cases Christian churches were built on them. Also found in the park are the low mounds (tells) that mark the sites of ancient settlements back from the Neolithic. The Hungarians arrived in the Carpathian Basin at the end of the 9th century and occupied the lands around the Tisza River. Settlements in the Middle Ages followed the Debrecen – Tiszafüred route. The main group was in the area defined by the existing settlements of Hortobágy, Nagyhegyes, Nádudvar and Nagyiván. Documentary records have shown that many of these had churches. By the early 13th century there was a dense network of settlements in the Hortobágy, with an economy based on pastoralism.

With the progressive depopulation of the region from the 14th century onwards, the settlements disappeared. The only manmade features in the wide plains of the Puszta were light temporary structures of reeds and branches, used to provide seasonal shelter for animals and men. The most significant surviving structures from the 18th and the early 19th century, which were public buildings built from stone and brick, are bridges, including the Nine Arch Bridge and the Zádor Bridge, and the csárdas, provincial inns to provide drink, food and lodging for travellers, which usually consist of two buildings facing one another, both single-storeyed and thatched or, occasionally, roofed with shingles or tiles. The best known of the csárdas are at the outskirts of Balmazújváros, Hortobágy, Nagyhegyes, Nagyiván and Tiszafüred.

From the middle 19th century, water regulation systems were set up to control over flooding of the Tisza River. This resulted in the partial draining of former wetlands, which were converted to grasslands or arable farming. Reduction of the water available for the natural pastures decreased their productivity, which was one of the main reasons of serious overgrazing in the early part of the 20th century. Efforts were made to diversify the land use of the Hortobágy, the most successful of which was the creation of artificial fishponds between 1914 and 1918 and again in the 1950s.

The cultural landscape of the Puszta represents the highest scenic quality, with pleasing and dramatic patterns and combinations of landscape features which give it a distinctive character, including aesthetic qualities and topographic and visual unity. The unbroken horizon is only occasionally disrupted by trees, groves, settlements or linear establishments (open wire lines and dikes). Human-made elements fit harmoniously into this landscape and sustainable land-use practices have contributed to the conservation of a diversity of species and biotopes and the maintenance of the landscape. There is almost no permanent human population within the property itself, but in the grazing season, from April to October, hundreds of stock-breeders graze their animals here. Their traditional pastoralism, with the related social customs and handicraft activities manifests itself in their intangible cultural heritage.

Criterion (iv): The Hungarian Puszta is an exceptional surviving example of a cultural landscape constituted by a pastoral society.

Criterion (v): The landscape of the Hortobágy National Park maintains intact and visible traces of its traditional land-use forms over several thousand years, and illustrates the harmonious interaction between people and nature.

The Puszta, represented by the Hortobágy National Park, is a complex mosaic of natural grasslands, loess ridges, alkaline pastures, meadows and smaller and larger wetlands (mostly marshes), which has presented ideal conditions for pastoralism since prehistoric times and which existed before the appearance of large animal-breeding cultures in this area. In this grassland-wetland mosaic habitat, the natural basis of the cultural landscape, the evidence of traditional and continuous use over more than four millennia has been preserved and is expressed through a variety of attributes, including human-made elements related to traditional animal husbandry and pastoralism. Legal protection as a nature conservation area guaranteed by the establishment of the Hortobágy National Park in 1972 has provided appropriate conditions for the preservation of these attributes and the continued use of the landscape within the property. Organically connected and separate grassland fragments, which continue to function as undisturbed, traditional grazing lands, can be found to some extent outside the National Park, which warrants the establishment of a buffer zone.

The main elements of historic land-use (extensive grazing with partly traditional breeds of domestic animals, as well as unused areas sustained in their natural conditions) still remain and the cultural landscape has preserved its structure, and functional complexity. The proportions of the scenery have inspired many artists, poets and writers throughout the centuries. The human-made elements of the landscape in service of the traditional land-use (dug wells made of wood, csárdas, bridges, temporary accommodations) preserve and sustain the features and technologies that evolved through the centuries, in their materials (e.g. adobe and reed), in their forms, in their structural construction (or the characteristic absence of certain elements, such as fences), and in the ways of their usage. The safeguarding of pastoral, handicraft and other community traditions (popular customs, fairs) related to land-use is ensured by their conscious practice and their transmission.

The Hortobágy National Park was established in 1972. The Act LIII of 1996 on the Protection of Nature regulates the activities that may have an impact on the character and qualities of the property including the different forms of land-use (grazing, hay and reed cutting, etc.) construction, and visitor management. At the time of inscription the area of the National Park was 74 820 ha. Since then, the Park was extended to almost 81 000 ha. The entire property is part of the Natura 2000 network of the European Union, in which Special Protected Areas and Special Areas of Conservation were designated in a way that they contain and encompass the area of the National Park including organically connected or separate grassland mosaic areas that are outside the National Park. The protection thus ensured by the Natura 2000 areas provides an appropriate basis for the establishment of a buffer zone. A conservational management plan of the National Park was prepared in 1997. Based on the national World Heritage Act of 2011, a World Heritage management plan will enter into legal force as a governmental decree. The Hortobágy National Park Directorate, having the land owner’s right on 75% of the property, acts as the World Heritage management body and has been re-appointed by the Minister responsible for culture. The World Heritage Act ensures the operation of a World Heritage Regional Architectural Planning Jury which facilitates high quality architectural developments aligned to the values of the property.

The archeological sites and historic monuments of the property are protected by the Act on the Protection of Cultural Heritage of 2001 and are listed in an official national register. Kurgans are ex lege protected by the Act on Nature Conservation of 1996. There is also a register of kurgans and draw wells established by the Ministry of Rural Development and the Hortobágy National Park Directorate. Furthermore, TÉKA (landscape elements inventory) is a nationwide cadastre representing landmarks, historical monuments, cultural and natural landscape values inter alia in the World Heritage property. The rehabilitation of the protected buildings of the Meggyes, the Hortobágyi and the Kadarcs csárdas has been carried out by the Hortobágy National Park. The rehabilitation of the protected Nine-Arch-Bridge also has been carried out by the Hajdú-Bihar County Road Operator Company.

Once approved and finalized, the World Heritage management plan will provide clear governance arrangements that involve representatives of the different stakeholders. Based on the World Heritage Act, the state of the property, as well as threats and preservation measures will be regularly monitored and reported to the National Assembly. The World Heritage management plan will be reviewed at least every seven years. In order to maintain the traditional land-use practices, especially common grazing, review of the land rental and farming contracts is essential, in particular with regard to areas under 100 ha. One of the strategic conservation goals is to extend the scope of the nature conservation-oriented horizontal agricultural subsidies as much as possible to grassland use in the property and in the future buffer zone. Another main objective is to decrease the ratio of hay cutting in favour of traditional grazing activities. Since they are detrimental to the grasslands, under- and overgrazing must be avoided together with intensive hay farming that leads to the deterioration of originally grazed habitats. The future buffer zone may remain the location for the more modern arable and grassland farming practices, but large constructions that disturb the landscape should be avoided. The unfavourable modernization of stock-keeping farms mandated by domestic and international laws and regulations needs to be prevented by the derogation of the relevant EU regulations, especially concerning concrete manure storage facilities. A short-term goal is the completion of landscape rehabilitation projects already in progress: elimination of linear establishments (canals and dikes), replacing open wire lines with underground cable. Other urgent tasks include combating invasive plant species, possibly by blocking their known migratory corridors; updating the inventory of pastoral buildings (stables, huts and sweep wells) and completing their monument protection survey; establishing a financial assistance system for the renovation of pastoral buildings; delineation of a buffer zone and its integration into regional and local development plans.