The Climats, terroirs of Burgundy

The Climats, terroirs of Burgundy

The climates are precisely delimited vineyard parcels on the slopes of the Côte de Nuits and the Côte de Beaune south of the city of Dijon. They differ from one another due to specific natural conditions (geology and exposure) as well as vine types and have been shaped by human cultivation. Over time they came to be recognized by the wine they produce. This cultural landscape consists of two parts. Firstly, the vineyards and associated production units including villages and the town of Beaune, which together represent the commercial dimension of the production system. The second part includes the historic centre of Dijon, which embodies the political regulatory impetus that gave birth to the climats system. The site is an outstanding example of grape cultivation and wine production developed since the High Middle Ages. 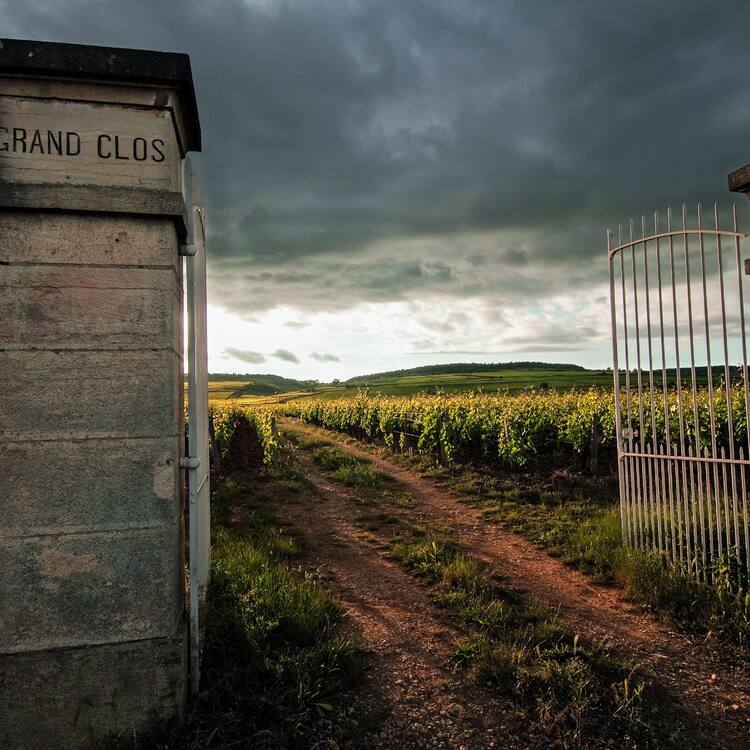 The Climats, terroirs of Burgundy, are small precisely delimited parcels of vineyard located on the slopes of the Côte de Nuits and the Côte de Beaune, natural hillsides with clay-limestone soils of extremely variable composition extending 50 km south of Dijon up to Maranges.

The vineyards of the Burgundy Climats are the birthplace and living archetype of terroir vineyards with the particularity of closely associating the gustatory quality of their production with the parcel from which it originates. In Burgundy, since the High Middle Ages, under the impetus of Benedictine and Cistercian monastic orders and the Valois Dukes of Burgundy, the identification of wine with where it was produced has been pushed to the highest degree, giving rise to an exceptional system of land parcels. The many vintages resulting from this mosaic, issued from two unique varieties (Pinot Noir and Chardonnay), illustrate the extreme diversity.

Thus, 1247 different Climats are precisely delimited according to their geological, hydrographical and atmospheric characteristics, and prioritized in the system of Appellations of Controlled Origin (AOC). Climats are the product of natural conditions and the accumulated experience of winemaker expertise over almost two millennia. In an exceptional manner they reflect the ancient relationship of local human communities with their territories. Since the Middle Ages, these communities have demonstrated their ability to identify, exploit and gradually distinguish the geological, hydrological, atmospheric and pedological properties, and the productive potential of the Climats.

The Climats thus exemplify an exceptional wine production model reflecting viticulture traditions and specific know-how. They were shaped by human labour into tiny subdivisions of land parcels. Many of these parcels or Climats are still clearly identifiable in the landscape - by paths, stone walls, fences or meurgers - and are defined and regulated by the 1936 appellation of origin decrees.

The regulatory mechanisms and the economic life of the site were structured under the leadership of the cities of Dijon and Beaune, centres of political, cultural, religious and commercial power. The Ducal Palace of Dijon, the Hospices of Beaune and the Clos de Vougeot Chateau represent the tangible trace of these powers. A still active coherent geo-system was gradually set up, consisting of three complementary elements: the vineyards with the wine villages; Dijon, pole of political and regulatory power, as well as scientific and technical support centre; and Beaune, the centre of the wine trade.

The Climats are today a unique and living conservatory of centuries-old traditions, an expression of the diversity of its terroirs and producer of wines, the excellence of which is recognized worldwide.

Criterion (iii): The geo-system of the Burgundy Climats, in associating the cadastral vineyard parcels, the villages of the Côte and the towns of Dijon and Beaune, is a remarkable example of a vineyard historic landscape the authenticity of which has never been questioned throughout the centuries and where viticulture is still lively. The vitality of this activity rests upon the transmission to future generations of experimented practices and the at least ten-centuries-long accumulation of vine farming and wine-making know-how. The differentiation of the cultivated parcels and terroirs was made possible by the political and commercial impetus of the towns of Dijon and Beaune which still remain lively centres for scientific and technical training, commerce and institutional representation. This distinction is accompanied by the progressive compilation of a body of regulations the completion of which corresponds to the establishment, in the first half of the 20th century, of the appellations of origin.

Criterion (v): The Burgundy Climats attest to the historical construction of a viticultural territory, with precisely-delimited parcels, which expresses the unique cultural equation of a human community that has chosen the reference to the place (the Climat) and to times (the millesime) as a marker of quality and diversity of a product resulting from the combination of the natural potential and human activity. The Climats represent human interaction with a specific natural environment influenced by the urban poles of Dijon and Beaune. The recognition of specific properties of the soil parcels and the progressive establishment of the Climats are materialised through physical delimitations which still survive in enclosures, walls, stone-piles (meurgers), hedgerows, paths, etc. and attest to the specificities of each Climat. The built heritage of the towns of Dijon and Beaune bear tangible witness to this viticultural construction: it is formed by edifices of power and representation of the institutions which governed the viticultural territory and are closely linked to the places of production and the lives of the viticultural actors. For two thousand years, the human perseverance in alliance with the unique natural conditions has made of this site the exemplary crucible of site-specific vineyards.

Integrity
Despite its proximity to the A6 highway, urban growth which occurred in delimited areas, and some changes to the landscape, the property maintains a satisfactory level of integrity. The cadastral structure has not been substantially affected, as demonstrated by the historical studies and the permanence of the boundaries and areas of the Climats.

The Burgundian model of cultivation and production, according to the classification established in the AOCs, is in itself a guarantee of integrity and maintenance of the parcels. The high land value of each parcel sustains their function and the stability of the properties. It also helps to control urban sprawl and to maintain the characteristics of the villages and the rural landscape. The permanence of the morphology and the urban fabric (roads, parcels, constructions) of the old centres of Dijon and Beaune bear witness to their integrity. They are protected areas where special monitoring and management measures are implemented. The integrity of the urban sites is also ensured by the permanence of the economic and cultural activity that enables maintenance of the heritage. Thus the geosystem of the Climats remains stable and homogeneous, and the territorial dynamics between the three structural elements (the parcels, Dijon and Beaune) remain operative.

Authenticity
Living witness of a specific natural environment which has been valorised by a stable human community, the Burgundy Climats’ authenticity is reflected in the permanence and liveliness of the millennial vine- and wine culture vocation. The cadastral recording of the vineyard parcels attests to their size, location and ownership, reflecting in a credible manner the complex process of formation of the Climats and the persistence of traditions and ancestral techniques, and farming land management. The continuity of the land use and parcelling is also expressed in the landscape features which articulate the Climats (e.g., stone walls, hedgerows, meurgers, paths, enclosures, etc.) and demonstrate their distinction and specificity. The phylloxera crisis at the end of the 19th century -- in itself a discontinuity which affected all European vine cultivation and wine making -- strengthened the resilience and perseverance of the local communities. The appellations of origin, established in 1936, and the associated specifications drawn up, contributed to maintaining the authenticity of the property, and still serve today as a reference, although, for the preservation of the landscapes and the supervision of their evolution, they need to be accompanied by other ad-hoc measures that are partially in place and partly being developed, and which should cover the entire property. The urban poles of Dijon and Beaune, as living centres for scientific and technical knowledge and education as well as for marketing and institutional representation, share in the same authenticity and still bear witness through their built heritage to the role played throughout the centuries in the construction of the Climats.

The property is protected at national and local level by interrelated and complementary devices. The legal framework includes the Heritage, the Urban Planning, the Environment, the Rural and Forest Codes.  In these codes, specific forms of protection are mobilised: classified sites, Natura 2000 sites, historic monuments, the buffer zones of monuments, conservation areas, architecture and heritage enhancement areas.

The entire property is governed by territorial plans entitled Territorial Coherence Schemes (SCOT), a landscape plan for the qualitative management of the landscape of the Côte between Ladoix-Serrigny and Nuits-St-Georges, and local urbanism plans. The perimeter of the property is fully covered by two SCOT (the Dijon SCOT and that of the cities of Beaune and Nuits-Saint-Georges) which provide a comprehensive framework for municipal master plans and local development plans: the coordination of their objectives and regulatory tools contributes to territorial management effectiveness through their sectorial planning instruments. The management framework is completed by the signing of a Territorial Charter by the 53 local decision makers.  It engages them to cooperate for the governance of the property, which is ensured by the Mission of Burgundy Climats. The latter comprises a board of directors, the territorial conference and an operational body, the permanent technical commission advised by a scientific committee, and a participatory forum of citizens and civil society. The expertise of the commission relies on the technical competences of the permanent staff and the existing bodies and offices. Financial resources for the functioning of the Mission are allocated by each body, institution and office that is part of the Mission. The management system is documented in a management plan based on the outstanding universal value of the property and identifies priorities and a strategic action plan detailed with specific operational programmes. Altogether these instruments must ensure that the landscape qualities and the characteristic parcel subdivisions of the property continue to be respected, as well as the transmission of the cultural and landscape values ​​of the property to those most closely involved (professional inhabitants) and the visitors.
Activities (1)