The List Historic Quarter of the City of Colonia del ...
Print

Historic Quarter of the City of Colonia del Sacramento

Historic Quarter of the City of Colonia del Sacramento

Founded by the Portuguese in 1680 on the Río de la Plata, the city was of strategic importance in resisting the Spanish. After being disputed for a century, it was finally lost by its founders. The well-preserved urban landscape illustrates the successful fusion of the Portuguese, Spanish and post-colonial styles. 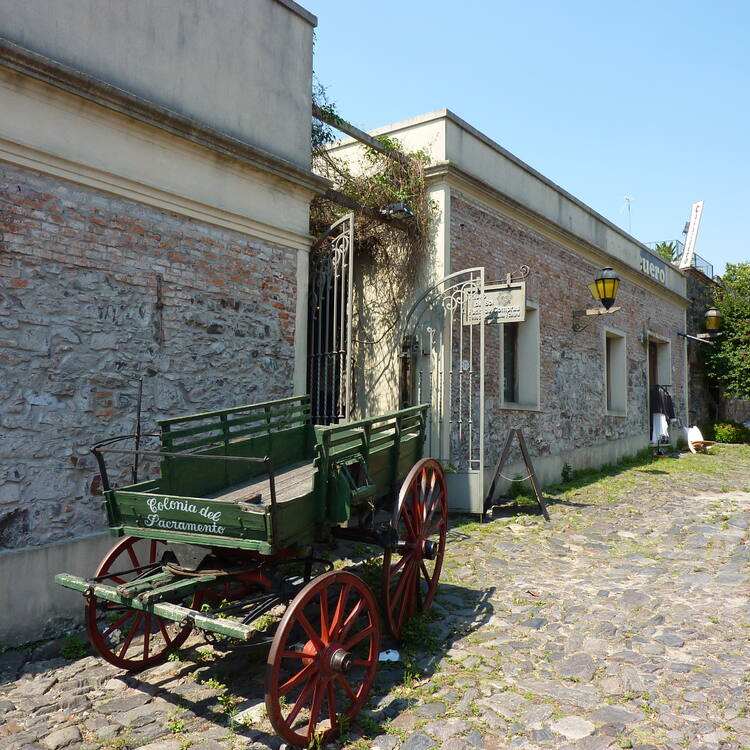 Founded by the Portuguese in 1680, Colonia del Sacramento is located at the tip of a short peninsula with a strategic position on the north shore of the Río de la Plata, facing Buenos Aires. In the region, the Historic Quarter of Colonia is the only example of an urban plan that does not conform to the rigid "checkerboard" grid imposed by Spain under the "Laws of the Indies." Instead, this city has a free plan adapted to the topographical features of the site, although strongly influenced by its military function.

Throughout the successive destructions and occupations of its territory, the Historic Quarter acquired the urban and architectural heterogeneity that characterizes it:  to the contributions of the Portuguese and Spanish, were added those of the artisans who emigrated there during the second half of the 19th century.

All of its modest buildings, in regard both to their dimensions and their appearance, are a particularly interesting testimony to the singular fusion of the Portuguese and Spanish traditions that is evident in the construction methods used. The civil and religious buildings with long stone walls, wooden trellis and tiled roofs reveal an excellent knowledge of traditional construction systems and contribute to the architectural unity specific to the Historic Quarter.

The special nature of Colonia del Sacramento is also based on its urban landscape, a mixture of large arteries and large squares, with narrow cobbled streets and more private spaces. The scale of the Historic Quarter is marked by the predominance of single-storey houses, those of two stories being rare. From the bay, only the outlines of the lighthouse and church towers stand out. Surrounded by water on three sides, the relationship of the city to the river is one of the natural aspects that additionally characterizes it.

The bloody border dispute between Portugal and Spain gave this remarkable urban site an identity profile enabling appreciation of the survival of its essential characteristics: the dominant human scale, the texture and the "time" of this unique scenario, and the value of its integration into the environment.

Criterion (iv):  The Historic Quarter of the City of Colonia del Sacramento bears remarkable testimony in its layout and its buildings to the nature and objectives of European colonial settlement, in particular during the seminal period at the end of the 17th century.

The site inscribed on the World Heritage List retains the elements necessary for the expression of its Outstanding Universal Value, in accordance with the attributes underpinning this value. Thus, despite the passage of time, the ancient Colonia del Sacramento has maintained its original structure and urban scale, as concerns both its buildings and urban spaces. In particular, the urban plan coincides almost exactly with that of the Lusitanian "Nova Colonia do Sacramento", notably with the period of greatest splendour corresponding to the first half of the 18th century.

All the elements necessary for the expression of the values of the Historic Quarter of Colonia del Sacramento are included in the designated area and its buffer zone. The area inscribed on the World Heritage List is clearly defined and includes all the attributes of the property as determined by the boundaries of the walled city of the 17th, 18th and 19th centuries. In addition, there is a buffer zone that extends to the immediate area of the Historic Quarter, including the city centre.

Given the condition of the property at the time of inscription on the World Heritage List, the conservation of its Outstanding Universal Value, as well as its credibility and original features, are evident.  Public and private interventions at the site are carried out in accordance with international standards and local opportunities. An admissibility process of construction practices is being implemented.

At the site, businesses that often change their main activity turn mostly to tourism services, and the cultural models and consumption requirements of new landlords constitute a wake-up call as regards the potential vulnerability of the authenticity in specific cases.

The layout itself, the public spaces and all the buildings of the Historic Quarter are listed as National Historic Monuments. They thus benefit from the highest protection under the national law in force (Law 14.040 of 1971).

The management of the Historic Quarter of Colonia is the purview of various organizations. At national level, the Ministry of Education and Culture (MEC) is responsible for policies concerning the protection, conservation, rehabilitation and enhancement of the cultural heritage of the nation. The Commission for the Cultural Heritage of the Nation (Law 14,040 of 1971) works under the umbrella of the MEC. Its main objectives are to advise the Executive Power of the Nation on properties listed as Historic Monuments, and to monitor the conservation of monuments and their social promotion. At the departmental level, the Honorary Executive Council (Law 15,819 of 1986) is the body responsible for the protection, conservation, rehabilitation and enhancement of all the sites and monuments of the Department of Colonia, including the Historic Quarter. At local level, the Town Hall of Colonia is responsible for urban planning and standards governing the use of land and construction, as well as utilities, maintenance and sanitary services of the conservation area. Various municipal decrees define the criteria for the construction of buildings, their height, the installation of billboards and acceptable noise levels. The decree on land use is currently under study.

Increased risks associated with real estate pressure, the increase in the number of tourists -- leading to changes in usage (increase in the number of shops and secondary residences), -- and the decrease in the numbers of the local population, oblige the authorities to initiate new planning processes and to rethink the management of the site. A Conservation Plan for the site inscribed on the World Heritage List, prior to the implementation of a Management Plan is currently under review, to counter this development.

It is expected, in the short term, to include the "Bay and the Islands of Colonia" as an extension of the property, on the premise that they are the complement of the terrestrial buffer zone that is already included in the Statement. Thus, all the surrounding territories (terrestrial, insular and aquatic), could benefit from the same protection and management measures as the Historic Quarter.