Crespi d'Adda in Capriate San Gervasio in Lombardy is an outstanding example of the 19th- and early 20th-century 'company towns' built in Europe and North America by enlightened industrialists to meet the workers' needs. The site is still remarkably intact and is partly used for industrial purposes, although changing economic and social conditions now threaten its survival. 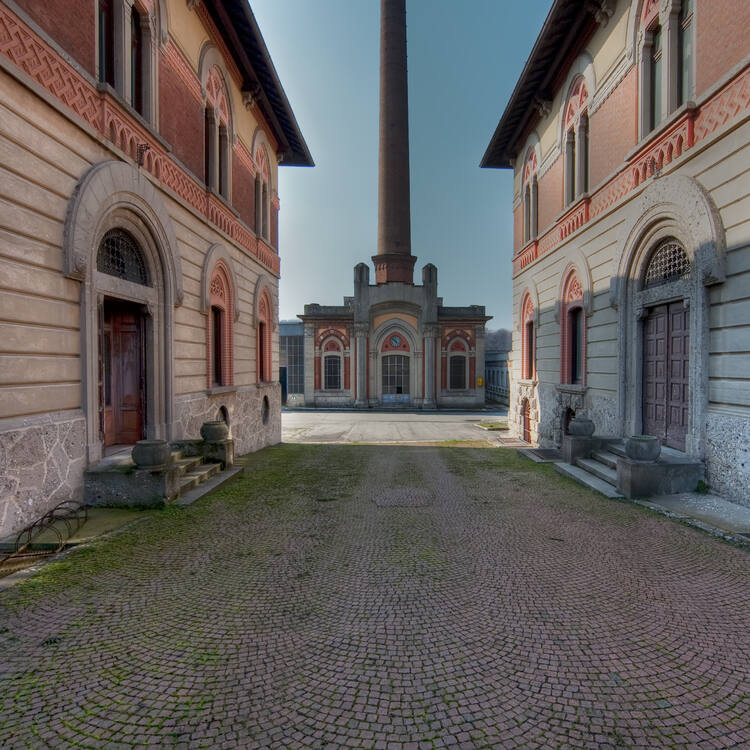 The workers’ village of Crespi d’Adda is situated in the Italian region of Lombardy, at the extreme southern point of the “Isola Bergamasca”, nestled between the Adda and Brembo rivers and the foothills of the Alps. The village was founded by Cristoforo Benigno Crespi, to house the workers in his textile factory and its final form was developed by Cristoforo’s son, Silvio Benigno Crespi, who had studied the functioning of German and English cotton mills. He developed the town to provide comfortable housing and services in order to maintain a stable workforce and prevent industrial strife. The town remained under the ownership of a single company until the 1970s after which many buildings, particularly houses, were sold to private individuals. Industrial activity has significantly declined with corresponding depopulation.

Completed in the late 1920s, the town offered employees a high standard of living with housing in multi-family residences (each with its own garden) and community services that were well ahead of the times. The entire town was laid out in a geometrically regular form, bisected by the main road from Capriate. The factory buildings and the offices were situated on one side of this road, on the left bank of the River Adda, and the village itself on the opposite side of the road following a rectangular grid of roads in three lines. The houses differ from each other in style offering a nice variety to the townscape, a variety that corresponds to the role its occupants originally played inside the factory.

Workers benefited from other amenities in addition to housing including public lavatories and wash-houses, a clinic, a consumer cooperative, a school, a small theatre, a sports centre, a house for the local priest and one for the doctor, a hydroelectric power station which supplied free electricity and other common services. There were also buildings with a more symbolic value such as the church, the castle (residence of the Crespi family), a new office complex, and houses for the factory managers located south of the workers’ residences.

Crespi d’Adda is an outstanding example of the 19th and early 20th century phenomenon of the ‘company town’ found in Europe and North America, which was an expression of the prevailing philosophy of enlightened industrialists towards their employees.

Criterion (iv): Crespi d’Adda is an exceptional example of a working village of Europe and North America, dating back to the 19th and 20th centuries, and reflecting the predominant philosophy of enlightened industrialists with respect to their employees.

Criterion (v): Crespi d’Adda is a rare example of a ‘company town’ because its urban and architectural structure is unaltered, having survived the inevitable threat posed by the evolution of economic and social conditions.

Crespi d’Adda has conserved much of its integrity as all aspects of the industrial town remain well preserved including factories, housing and services. This is due primarily to the fact that factory production continued until 2004. As a result, public, private, and industrial buildings have remained intact, and have not been demolished or substantially modified. Moreover, this situation has permitted the retention of the relationships between these constituent elements.

Although the village remains intact, changing economic and social conditions, particularly a declining population, pose a potential threat to its continued survival. This threat might be contained and mitigated by recent positive changes with a demographic and socio-economic plan.

Crespi d’Adda’s isolated setting in the river valley is responsible, in part, for its remarkable authenticity, in comparison with other Italian and European company towns where changes and modifications were made by their owners due to their close proximity to big cities and in response to changing economic conditions and social structures.

The village has retained all the original elements of a company town. Authenticity in form and design are evident in the street pattern layout and the survival of its buildings. Public, private, and industrial buildings remain intact and have not been demolished or substantially modified. However, some change has occurred such as modification to the colours of the residences from their original white exterior with red bricks surrounding window frames. In addition, the alteration in industrial practice has resulted in a change of use for many buildings.

The property is administered by the Municipality of Capriate San Gervasio with some responsibility falling to the Consorzio Parco Regionale Adda Nord benefiting from various levels of protection: national, regional and local. At the national level, the town is under the protection of Legislative Decree 42/2004, Code of cultural heritage and landscape which designated it as an “urban centre of historical character and environmental importance”. This legislation imposes a number of restrictions on owners. In both the historic centre and the surrounding landscape, authorization for each intervention is granted or denied by the relevant authority (e.g. a region can delegate to a municipality) in order to ensure the compatibility of the project with the conservation criteria. At the municipal level, protection is provided through prohibitions to inappropriate urban development or modifications.

Additional measures apply to the complex’s most important buildings such as the Crespi family mausoleum, all the public properties, and the Roman Catholic Church’s property. Crespi d’Adda is also subjected to an instrument of urban planning (Urban Master Plan). This plan regulates decisions concerning methods of intervention relating to environmental and architectural heritage, on the basis of historical studies and analysis.

The entire property had remained in company ownership until it was sold in the 1970s. Today, the ownership of the various properties is divided among public (municipal), religious (Roman Catholic Church - Curia of Bergamo) and individual or private. The private owner has indicated his intention to reallocate work in the factory, probably related to the services sector and, at the same time, to improve cultural and touristic activities in the village.