Commercial and political rivalries in the Caribbean region in the 17th century resulted in the construction of this massive series of fortifications on a rocky promontory, built to protect the important port of Santiago. This intricate complex of forts, magazines, bastions and batteries is the most complete, best-preserved example of Spanish-American military architecture, based on Italian and Renaissance design principles. 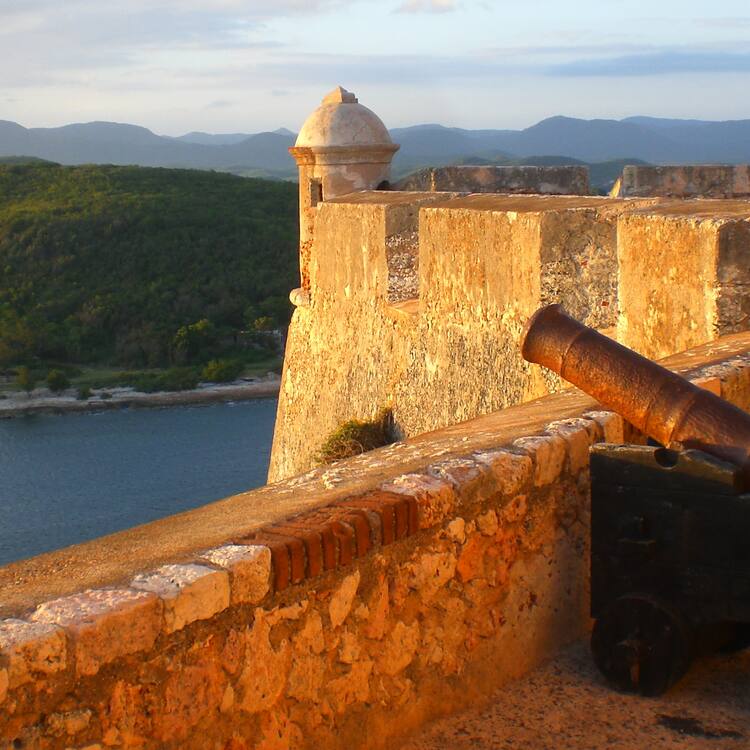 San Pedro de la Roca Castle, a multi-level stone fortress built into a rocky promontory (El Morro) at the south-eastern end of the island of Cuba, has guarded the entrance to Santiago de Cuba Bay since 1638. This exceptional fortress and its associated defensive works were constructed in response to the aggressive commercial and political rivalries that menaced the Caribbean during the 17th and 18th centuries; today, they constitute the largest and most comprehensive example of the principles of Renaissance military engineering adapted to the requirements of European colonial powers in the Caribbean. A classic bastioned fortification in which geometrical form, symmetry and proportionality between sides and angles predominate, the Castle is an outstanding representative of the Spanish-American school of military architecture.

San Pedro de la Roca Castle and its associated batteries of La Estrella, Santa Catalina and Aguadores protect the entrance to the bay and port of San Diego de Cuba, which was of great importance because of its geographical situation, its favourable currents and its protected anchorages. As conflicts between Spain and England grew in the 17th century, the town’s governor ordered the construction of a stone fortress on a strategic point where an earlier ravelin existed, following the designs of the renowned Italian military engineer Juan Bautista (Giovanni Battista) Antonelli. The fortress was built into the promontory’s steep cliffs in a progression of terraces, one above another, linked by a series of stairways. At the lowest level, just above high-water mark, is a fortified gun platform, powder magazine, command building and guard post. Next is the Santísimo Sacramento Platform, which includes gun emplacements, a powder magazine and quarters for its garrison. Above it are the El Aljibe, De Adentro and Napoles platforms. This part of the castle took its present form during a mid 18th-century reconstruction, when the North and South Bastions were added. The Santísima Trinidad Platform is the highest level of the main castle, and was built in the 1660s. To the north lies La Avanzada Fort, which completes the chain of smaller defensive works down the north side of the promontory, consisting of La Estrella Fort and two smaller forts built in the 1660s. Added later were the Semaphore Tower, the Chapel of Santo Cristo and the Lighthouse, all built in 1840, and two batteries, Scopa Alta and Vigia, built in 1898. The fortress – which has been repaired, reconstructed and consolidated numerous times due to earthquakes and attacks – declined during the early 20th century due to lack of maintenance, but was restored in the 1960s. This intricate complex of forts, magazines, bastions and batteries, all based on Italian and Renaissance design principles, is today the most complete and best-preserved example of this Spanish-American school of military architecture.

Criterion (iv):Constructed in response to the aggressive commercial and political rivalries that menaced the Caribbean during the 17th and 18th centuries, the Castle of San Pedro de la Roca and its associated defensive works are of exceptional value because they constitute the largest and most comprehensive example of the principles of Renaissance military engineering adapted to the requirements of European colonial powers in the Caribbean.

Criterion (iv): The Castle, a classic bastioned fortification in which geometrical form, symmetry and proportionality between sides and angles predominate, is an outstanding representative of the Spanish-American school of military architecture.
Integrity

Within the boundaries of San Pedro de la Roca Castle, Santiago de Cuba, are located all the elements necessary to express its Outstanding Universal Value, including the Castle fortress complex and its associated forts, magazines, bastions and batteries, as well as the rocky promontory El Morro on which the Castle is located. (Not all the elements that make up the property have been fully documented.) The 94 ha property is of sufficient size to adequately ensure the complete representation of the features and processes that convey the property’s significance, and it does not suffer from adverse effects of development and/or neglect.

Many aggressive atmospheric agents and sources of pollution have been registered that may threaten or damage the property, as well as its environment.

Authenticity
The authenticity of San Pedro de la Roca Castle, Santiago de Cuba, is high in terms of location and setting, forms and designs, and materials and substances. It underwent little change from the late 19th century, when its use as a fortress ceased, to the 1960s, when restoration work was undertaken according to the 1964 Venice Charter.

A number of conservation problems were noted in 1997. The most serious related to the wooden elements of the monument, where the choice of inappropriate timbers combined with pest attack resulted in severe degradation. The eroded walls needed stabilisation treatment, the vaults beneath the Santísimo Sacramente Platform required consolidation, and there was unsightly and potentially damaging vegetal growth in many of the walls.

The property is in an active seismic zone (Site Class A, hard rock).

San Pedro de la Roca Castle, Santiago de Cuba, is owned by the Cuban state. The responsible national agency is the Consejo Nacional del Patrimonio Cultural (National Council of Cultural Heritage). The inscribed property is protected by provisions in the Constitución de la República de Cuba (Constitution of the Republic of Cuba) of 24 February 1976 and by National Monuments Commission Resolutions 9/1979 and 147/1997 designating it as a National Monument, in application of the Ley de Protección al Patrimonio Cultural (Law on the Protection of Cultural Property, Law No. 1 of 4 August 1977), and the Ley de Monumentos Nacionales y Locales (Law on National and Local Monuments, Law No. 2 of 4 August 1977). It is also part of Turquino Peak (Sierra Maestra) National Park. The property is managed by the Centro Provincial del Patrimonio Cultural de Santiago de Cuba (Provincial Centre for the Cultural Heritage of Santiago de Cuba), and the Castle has been occupied by the Museo de la Pirateria (Piracy Museum) since 1978.

The National Park in which the inscribed property is located has a management plan that takes into account the cultural sites within the park, as well as tourism pressures. In addition, a plan was prepared in 1994 for the monument itself by the provincial Technical Office for Monuments and Historic Sites and the provincial Physical Planning Administration. This plan has been approved by the municipality of Santiago de Cuba.

Sustaining the Outstanding Universal Value of the property over time will require registering and documenting all the elements that make up the property; addressing the identified and potential agents and sources of pollution that threaten the property and its environment; undertaking appropriate conservation interventions related to the severe degradation of the wooden elements of the monument; stabilising eroded walls; consolidating the vaults beneath the Santísimo Sacramento Platform; removing any potentially damaging vegetal growth in the walls; preparing a risk reduction and emergency preparedness plan for this active seismic zone; and establishing monitoring indicators related to these and other actions that may have an impact on the Outstanding Universal Value, authenticity and integrity of the property.