The List Historic and Architectural Complex of the ...
Print

Historic and Architectural Complex of the Kazan Kremlin

Historic and Architectural Complex of the Kazan Kremlin

Built on an ancient site, the Kazan Kremlin dates from the Muslim period of the Golden Horde and the Kazan Khanate. It was conquered by Ivan the Terrible in 1552 and became the Christian See of the Volga Land. The only surviving Tatar fortress in Russia and an important place of pilgrimage, the Kazan Kremlin consists of an outstanding group of historic buildings dating from the 16th to 19th centuries, integrating remains of earlier structures of the 10th to 16th centuries. 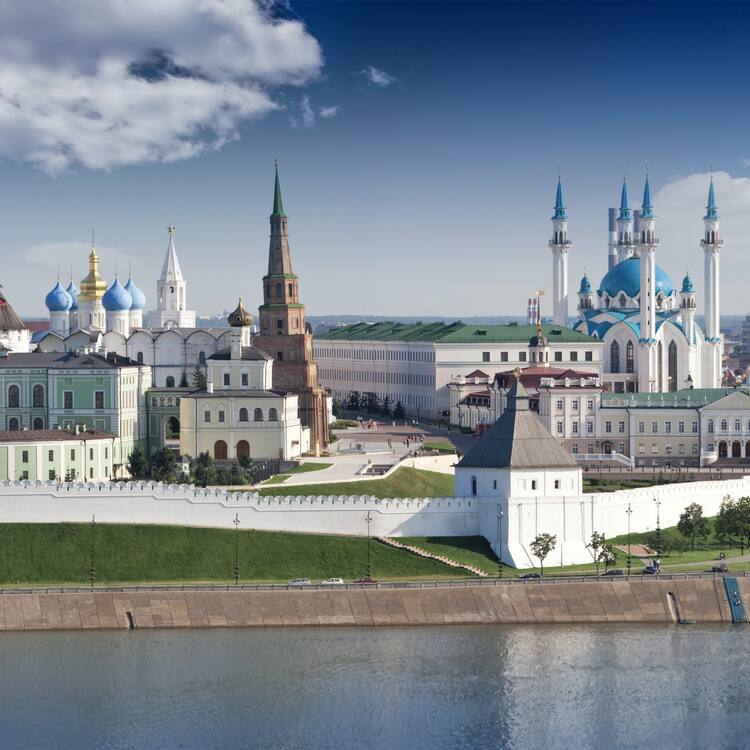 Historic and Architectural Complex of the Kazan Kremlin © Official Tourism Portal of the Republic of Tatarstan - visit-tatarstan.com

Built on a site inhabited since very ancient times, the Kazan Kremlin dates back to the Islamic period in the history of Volga Bulgaria, the Golden Horde and the Kazan Khanate. In the 10th-13th centuries, Kazan was a pre-Mongol Bulgar city with fortified trading settlement, surrounded by moats, ramparts and stockade. In the 12th century, a white stone fortress was constructed, and the city became an outpost on the northern border of Volga Bulgaria. In the 13th-16th centuries, the city developed in the framework of the Golden Horde and Kazan Khanate. In the first half of the 15th century, it became a capital of the state and an active political, military, administrative, commercial and cultural centre. It was conquered in 1552 by Ivan the Terrible and became the Christian See of the Volga Land and the East. The Kremlin, which in many respects kept the planning of an ancient Tatar fortress and which became an important centre of pilgrimage, consists of an outstanding group of historic buildings dating from the 16th to the 19th centuries, integrating remains of earlier structures of the 10th to the 16th centuries.

At present, the Kremlin includes several historical, architectural, and archaeological complexes, including: the fortifications, the Governor’s Palace and Syuyumbeki’s Tower, the Annunciation Cathedral, the Public Offices, the Saviour-Transfiguration Monastery, the Cadets’ School, and the Cannon Foundry. The archaeological layers range from 3 m to 8 m in depth.

The citadel is an exceptional testimony of historical continuity and cultural diversity. Apart from its remarkable aesthetic qualities, the site has retained traces of its foundations in the 10th century, as well as from the Khanate period (15th to 16th centuries). The Kazan Kremlin is the last extant Tatar fortress with traces of its original town-planning conception in Russia. This historical citadel is a result from the interaction of various cultures - Bulgar, Golden Horde, medieval Kazan-Tatar, Italian, Russian, and modern Tatar. It is the northwestern limit of the spread of Islam, and the southern extremity of the Pskov-Novgorod style. The unique synthesis of Tatar and Russian architectural styles is reflected in its key monuments (Syuyumbeki’s Tower, the Annunciation Cathedral, and the Saviour Tower). The ensemble is inseparable from its surroundings and the entire city, where the historic quarters form the buffer zone. The new mosque that was built within the complex can be understood as a new construction in a historic context. However, it should be noted that the construction reunites the ensemble of the Kremlin, enriches the architecture of the city and symbolizes the peaceful coexistence of different cultures, Islam and Christianity, which makes the mosque an exceptional monument.

Criterion (ii): The Kazan Kremlin complex represents exceptional testimony of historical continuity and cultural diversity over a long period of time, resulting in an important interchange of values generated by the different cultures.

Criterion (iii): The historic citadel represents an exceptional testimony of the Khanate period and is the only surviving Tartar fortress with traces of the original town-planning conception.

Criterion (iv): The Kazan Kremlin and its key monuments represent an outstanding example of a synthesis of Tatar and Russian influences in architecture, integrating different cultures (Bulgar, the Golden Horde, Tatar, Italian, and Russian), as well as showing the impact of Islam and Christianity.

The integrity of the complex is assured by the approved boundaries of the property, which includes all its attributes, and the buffer zone. It is an integrated complex enjoying its documentarily and archeologically proved centuries-old history, its urban fabric, centuries of continuity of functional planning development and the natural landscape.

The urban fabric of the Kazan Kremlin has formed the basis of the continuous development of the central part of Kazan city where the citadel is the centerpiece of composition. The unique integrity of the Kremlin is proved by a number of attributes within the property allowing the tracing of the process and results of its development.

The essential visual links between the property and the water landscape could be at risk from inappropriate development around the Kremlin. New construction within the property could damage its integrity and should be wholly exceptional.

Kazan Kremlin dates back to the 10th century, and its authenticity has been attested by a number of historical chronicles and historical writings (the Nikon Chronicle, the Rogozhsky Chronicler, the Novgorod chronicles, Story of the Tsardom of Kazan, Prince Kurbsky’s Legendry about the Conquest of Kazan), abundant archaeological material, documents, and archival records, as well as by the urban structure itself. The original urban layout of the Kazan Kremlin has remained essentially unchanged from Bulgar times, and has provided the basis for the continuous development of the town in all subsequent periods. In all their stylistic variety, the architectural monuments are perceived as an ensemble, and the Kremlin has remained a major compositional point of the city of Kazan.

In its history, the Kremlin area has gone through many changes, involving demolition and reconstruction. Some of the losses in the Stalinist period are regrettable and have subsequently required important interventions in terms of restoration and reconstruction. However, such changes can now be considered as part of its historical layers. In recent decades, there have been a large number of restorations in the different parts of the complex. The documentary evidence of the restoration has been preserved.

A special case in the Kremlin complex is the mosque of Koul Charif. There is no exact information about the original mosque, destroyed when the city was captured by Ivan the Terrible in 1552. The mosque can therefore be seen as a new building. The project for construction of a mosque was chosen at the architectural competition founded by the government. The approved project adheres to traditional vision of the spatial concept and decor; however, modern materials and structural systems are applied. This impressive construction can be seen as a sign of the continuity of a spiritual dialogue and balance between different cultures.

Legislative and institutional frameworks for effective conservation and management support of the Outstanding Universal Value of the Historic and Architectural Complex of the Kazan Kremlin have been established by laws and regulations of the Russian Federation and the Republic of Tatarstan.

The status of a national listed monument under state protection has allowed conservation of all the architectural items and archeological cultural layers in good condition.

The site is managed and functions in accordance with the concept of museumification and development of the State Historical, Architectural and Art Museum-Preserve Kazan Kremlin of 2006-2020.

The key management issues include study, conservation and scientific restoration of the monuments, the museum affairs institution and the creation of new museums, as well as organization of the heavy flow of visitors and excursions for them in order to preserve all the characteristics intact.

In order to achieve statutory goals, to accumulate extra budgetary resources and to use them for conservation and development of the Complex there has been established the Guardian Council of the Museum-Reserve of Kazan Kremlin.

A long-term strategy defines the means of protection and management focused on the prevention of serious threats to the property, on the reduction of vulnerability and negative changes of the authenticity and integrity of the complex. These include an effective integrated legal system of management and cooperation of stakeholders, including municipal, republican, federal, non-governmental and religious organizations, funds, academic and educational institutions and the local population; resources management, an innovative combination of conservation, restoration, museumification and sustainable development of the complex territory and establishing of an integrated system of a new type of museums united by a common idea; creation of educational programs, a rapid introduction of cultural, scientific and pilgrimage tourism, as well as the combination of traditional and innovative methods of conservation and promotion of the Outstanding Universal Value of the Kazan Kremlin.

For the preservation of visual connections between monuments and a seascape, the assessment of potential influence of any new projects on the Outstanding Universal Value of the property is made. 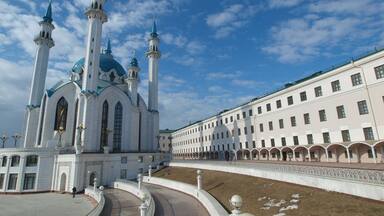