The List Monastery and Site of the Escurial, Madrid
Print

Built at the end of the 16th century on a plan in the form of a grill, the instrument of the martyrdom of St Lawrence, the Escurial Monastery stands in an exceptionally beautiful site in Castile. Its austere architecture, a break with previous styles, had a considerable influence on Spanish architecture for more than half a century. It was the retreat of a mystic king and became, in the last years of Philip II's reign, the centre of the greatest political power of the time. 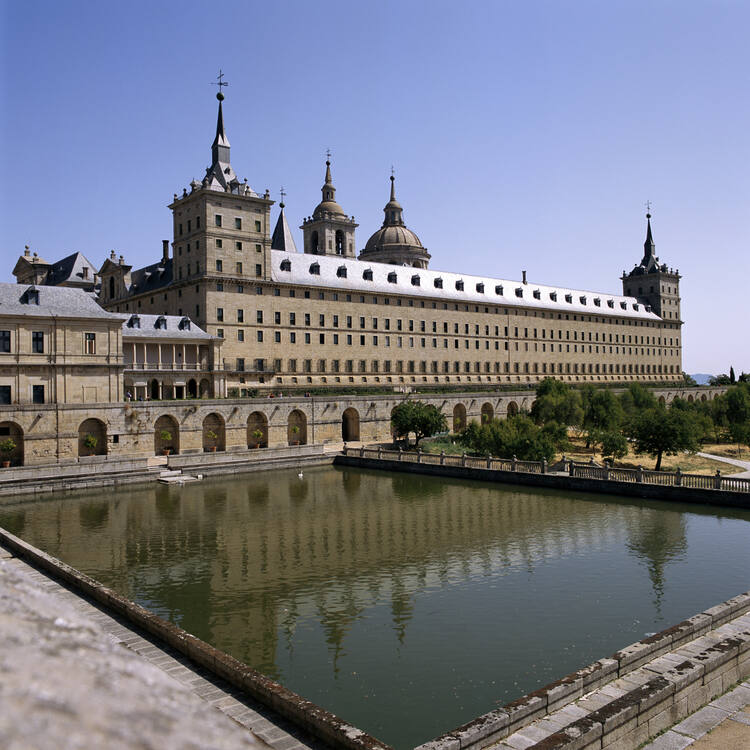 Monastery and Site of the Escurial, Madrid (Spain) © UNESCO

Built at the end of the 16th century, the Escurial Monastery stands in an exceptionally beautiful site at the foothills of the Sierra de Guadarrama, north of Madrid. It was the retreat of a mystic king, Philip II, and became in the last years of 'his reign the centre of the greatest political power of the time.

Philip II founded the monastery in 1563 as a votive monument and pantheon to the Spanish monarchs from the Holy Roman Emperor Charles V onwards. Its design, which is complex yet also simple, was created by Juan Bautista de Toledo, Spanish pupil of Michelangelo during the works of the Vatican Basilica, and completed by Juan de Herrera after Toledo’s death.

The royal site includes the monastery, a stone complex of extraordinary dimensions surrounded by formal gardens and the monks’ gardens, the House of Trades, and the Company Quarters where the palace and monastery services were accommodated. In the 18th century, the new Houses of Trades were built, completing the Lonja (the stone esplanade), and, consequently, a small town arose around the monastery, becoming a model of the Enlightenment, accommodating the court as well as the two country villas for Charles III’s sons.

Within the monastery’s massive volume, there is an ensemble of different buildings: the monastery, the church, the royal palace, the school, the seminary, and the royal library, brilliantly organised around eleven main courtyards and three service courtyards. Some say, the design is similar to that of the grill, the instrument used for St Lawrence’s martyrdom. Its austere architecture, a sparsely ornate style, known as “herreriano”, was a break with previous styles, and had a deep influence on Spanish architecture for more than half a century. Notwithstanding, several rooms do have a very rich and sublime decoration. Contemporary writers praised it as one of greatest paradigms of the arts: the “Eighth Wonder”.

The Royal Monastery and Site of St Lawrence of the Escurial is the monument that symbolises the ideological and artistic expression that inspired and represented the Spanish Catholic Monarchy during the Golden Age, between the 16th and 17th centuries, as well as its permanence until the end of the Ancien Régime.

Criterion (i): The Monastery and Site of the Escurial, Madrid, represents a masterpiece of human creative genius, where the great collective work of important artists were subject to the will and orders of the historic figure of King Philip II.

Criterion (ii): The Monastery and Site of the Escurial expresses an important interchange of human values, and symbolises the ideological and artistic expression that influenced developments in architecture, monumental arts, and landscape design during the Spanish Golden Age. The architectural ensemble is an example of the palace convents and their urban and landscape design built by the European Christian monarchies Its final layout of the 18th century makes it one of the most representative examples of the Real Sitio – the courtiers’ residential town – developed by the monarchy as a seat and reflection of its power.

Criterion (vi): The Monastery and Site of the Escurial, Madrid is directly associated with very important historic personalities in European history and the world, such as the Holy Roman Emperor Charles V and all his descendants from the House of Austria and the House of Bourbon who occupied the Spanish throne, in particular Philip II. It embodied, in an exemplary way, the ideology of the society and the austere pomp and ceremony with which its divine and worldly majesty was represented.

The inscribed property encompasses an area of 94 ha. The original constructions built during Philip II’s reign – the main building of the Monastery and the Houses of Trades – as well as those built under Charles III’s reign, in the 18th century, which made up the new town that constituted the Royal Site of St Lawrence, remain completely intact. The unified character of the buildings built during Philip II’s reign was preserved two centuries later thanks to the talent of the royal architect, Juan de Villanueva, since this monument was an example of an absolute architectural model for the academicians of the Enlightenment.

The transformation of the majority of pasture lands, that made up the royal woods during the 19th century, and the town’s development in the 19th and 20th centuries have not had an adverse effect on the conservation of the monument or its perceived image. The natural landscape of the estate of the Herrería, the natural surroundings closest to the monument, are under the protection of National Heritage.

The geographical location and the heterogeneous landscape of the monument have been maintained. Both the original constructions built during Philip II’s reign, as well as those built under Charles III’s reign, are conserved fully respecting the design, layout, interplay of open spaces and closed volumes, materials, and the ensemble’s spirit. The formal expression of the monument in itself contributes to keeping this spirit alive.

The functional dynamism of the main building, designed for the coexistence of life in the monastery and the court, is perpetuated today in the compatibility of its present functions: religious – Augustinian Fathers have run the monastery since the 19th century; educational – through the Real Colegio founded by Alphonse XII in 1875; and for cultural research and museum studies.

The general framework for the protection and management of the monuments is mainly established by the law 23/1982 which regulates the Spanish National Heritage Board and includes the Royal Palace – Monastery, the Casita del Príncipe, with its vegetable garden and agricultural land, the Casita de Arriba, the Houses of Trades, and the Queen’s and Infantes’ quarters. The Board is responsible for the protection, conservation, and enhancement of the properties and rights of National Heritage as well as the patronage of the Real Patronato del Monasterio de San Lorenzo de El Escorial.

The ensemble of buildings is still administered by the Consejo de Administración de Patrimonio Nacional (Spanish National Heritage Board), a body which inherited the Crown’s Heritage, and which has under its protection the most important monuments of the Royal Foundation, maintaining its unified character. Given its mandate, the Board is responsible for safeguarding the coherence between the different elements, favouring the use of traditional materials and building techniques depending on each case. To this effect, it carries out intervention and conservation projects in real estate and chattel, including implementing nature conservation plans. The Plan de Protección Medioambiental del Bosque de la Herrería (Environmental Protection Plan of the Herrería Woods) will be the main planning tool to protect the immediate natural surroundings of the property.

Additional regulations offer different degrees of protection and strengthen the conservation of the monument and its surroundings, the latter being one of the most vulnerable aspects due to the threat posed by urban development.

The different properties are listed in the Spanish State’s Heritage Inventory as monuments, historic garden or historic ensemble, depending on the corresponding category of each element.

On a regional level, the Government of the Autonomous Community of Madrid has classified the Royal Site as a Property of Cultural Interest (BIC, Bien de Interés Cultural) under the category of Historic Territory as part of the Cerca Histórica de Felipe II (the surrounding land fenced off by Philip II). The Regional List of Species of Wildlife at Risk also protects trees that are considered to be exceptional.

On a local level, the elements of the property are registered in the Local Authorities´ Protection Inventories.

The protection and management of the property and its surroundings will continue through a global, integrated, and inter-disciplinary approach in which the methodology of preventive conservation will be included and significance of the architectural ensemble and its surroundings will be protected in balance with the needs and evolution of society.