Built in the 12th and 13th centuries, this was Scandinavia's first Gothic cathedral to be built of brick and it encouraged the spread of this style throughout northern Europe. It has been the mausoleum of the Danish royal family since the 15th century. Porches and side chapels were added up to the end of the 19th century. Thus it provides a clear overview of the development of European religious architecture. 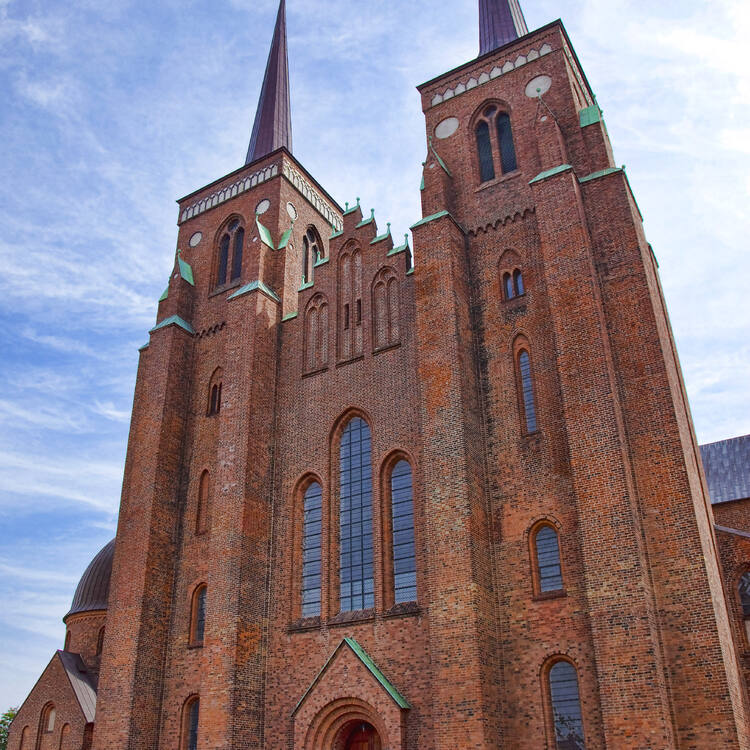 Roskilde Cathedral, on the Island of Zealand is a large brick-built aisled Gothic-style basilica, with twin spires and a semi-circular gallery within. Placed on a small hilltop overlooking the Roskilde Fjord the Cathedral is a very significant landmark. Around it, in its setting, the structure of the medieval town is still visible, within which, some medieval buildings and a number of fine 17th and 18th century houses remain.

Built about 1170, the original Cathedral structure was in Romanesque form but, when half-built, the plan was changed under the influence of the incoming Gothic style from France. In the following centuries, chapels, porches, and other structures were added, each in the current architectural style of the time. As a result, the Cathedral has emerged as an epitome of the history of European architecture in a single structure.

As with many early structures, the bricks in the external walls vary in size and colour. The interior walls were originally left bare, apart from the vault and arch soffits, which were plastered. The entire interior was subsequently coated with a greyish-yellow coloured smooth stucco, and most of the rich original wall paintings have disappeared.

The Cathedral's royal monuments commemorate an outstanding series as royal burials that have occurred from the 10th century until the present time. With only one exception since the reformation, all Danish kings and queens have been buried in the Cathedral, their tombs representing the evolution of funerary monumental art.

Roskilde Cathedral is an outstanding example of the early use of brick in the construction of large religious buildings in Northern Europe. Because of the successive addition of chapels and porches to commemorate Danish royalty since the 16th century, it is also an exceptional example of the evolution of European architectural styles in a single structure.

Criterion (ii): Roskilde Cathedral is an outstanding example of the earliest major ecclesiastical building in brick in Northern Europe and had a profound influence on the spread of brick for this purpose over the whole region.

Criterion (iv): Both in its form and setting, Roskilde Cathedral is an outstanding example of a North European Cathedral complex especially noteworthy for the successive architectural styles used in ancillary chapels and porches added in the course of the centuries during which it has served as the mausoleum of the Danish royal family.

The Cathedral and all later chapels are included in the property. An anticipated extension of the buffer zone will emphasize the relationship between the monument and its setting, thereby strengthening its overall integrity. Together, this combination will ensure that all relevant elements will be protected in order to fully express the value of the Cathedral in its setting.

Like any major religious structure in continuous use since first built, Roskilde Cathedral has undergone many changes. Earlier chapels were demolished to permit the construction of royal funerary chapels, and sporadic fires have led to periodic restoration and reconstruction, often accompanied by significant stylistic changes. The major restoration initiated by King Christian IV during the early 17th century to remedy the dilapidation that followed the Reformation resulted in substantial changes being made.

In the late 19th century the entire building was restored: the work being led by the highly qualified churchwarden in collaboration with leading architects and art historians of the time. Further renovation work to the roof and spires took place between 2006 and 2009. Restoration work on the chapels is being continuously conducted, whilst maintaining a profound respect for their design and materials. The extensive restoration documentation is kept in the Cathedrals Archives, and in the Archives of the National Museum.

Since the 16th century the Cathedral has served as the Danish Royal Family mausoleum, with the latest funeral occurring in 2000.

The Cathedral is protected under the Churches and Churchyards Consolidated Act of 1992. This requires any alteration to it to be approved by the diocesan authorities after consulting with the National Museum, and the Royal Inspector of Listed State Buildings.

Most of the buildings in the setting beyond the buffer zone surrounding the Cathedral are protected under the Preservation of Buildings Act. This requires any alteration to be approved by the Heritage Agency of Denmark.

The Town Plan regulates the immediate surroundings of the Cathedral, putting in place public controls over such aspects as new buildings, traffic, lighting, signboards and paving.

In order to strengthen the protection of the setting of the property the Town Council of Roskilde is currently collaborating with the Heritage Agency of Denmark on an extension to the buffer zone, and on implementing protected view-lines in the Town Plan.

Roskilde Cathedral is to review its management plan for the property in 2010.