Set in an idyllic garden landscape, Augustusburg Castle (the sumptuous residence of the prince-archbishops of Cologne) and the Falkenlust hunting lodge (a small rural folly) are among the earliest examples of Rococo architecture in 18th-century Germany. 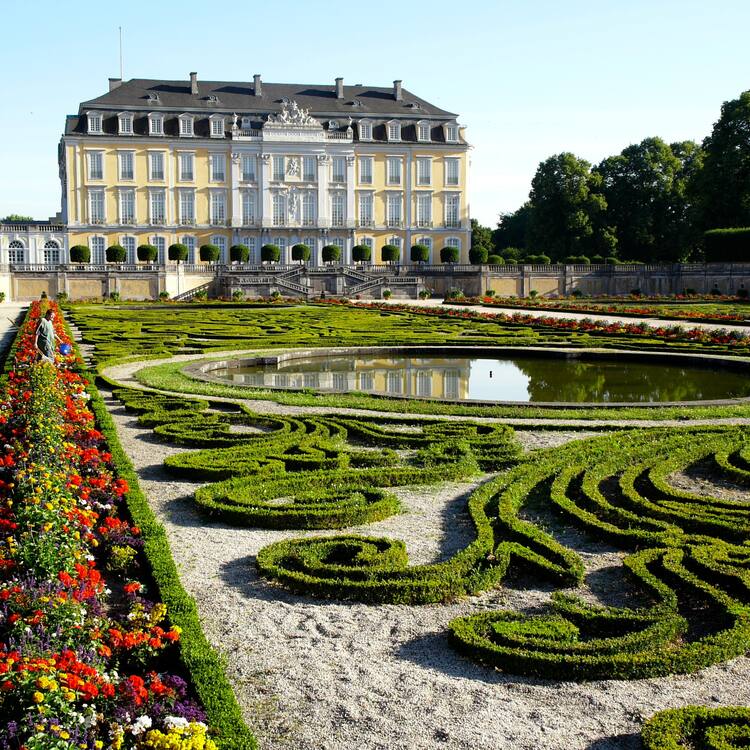 Set in an idyllic garden landscape, begun by architect Johann Conrad Schlaun, and finished by François de Cuvilliés, Augustusburg Castle, the sumptuous residence of the prince-archbishops of Cologne, and the Falkenlust hunting lodge, a small rural folly, are among the earliest and best examples of 18-century Rococo architecture in Germany, and directly linked to the great European architecture and art of unprecedented richness of the time. In 1725, Clemens August of Bavaria (1700-1761), Prince-Elector and archbishop of Cologne, planned and constructed this large residence at Brühl on the foundations of a medieval castle. It consists of three wings built of brick with rough-cast rendering and has two adjoining orangeries, one on the south side which includes an oratory, while the other to the north houses various service buildings.

The Castle of Augustusburg, a bold and successful revamping of the lack-lustre construction of Schlaun and the hunting lodge of Falkenlust, a dazzling creation, ex nihilio, are one of the best examples of the Rococo style, this international art of unprecedented richness. At Augustusburg, the staircase of Balthasar Neumann – considered a work of creative genius – is a rapturous structure which unites a lively movement of marble and stucco, jasper columns and caryatids, and culminates in the astonishing frescoed ceiling of Carlo Carlone. The central block, the wings of the parade, and the private apartments are organised in a hierarchy of effects of outstanding conception, while the décor “bon enfant” of the new grand summer apartments, with its faience tiles from the Low Countries, opposes the “official” programme.

The Castle of Falkenlust stands in its own small park. It was built by François de Cuvilliés between 1729 and 1737 for Prince-Elector of Cologne, Clemens August, to practise his favourite sport of falconry. The main building has two floors and is built in the style of a country house in brick with a rough-cast rendering. It is flanked by two rectangular single-storey buildings, which originally housed the Prince Elector´s falcons and are now mainly used for exhibitions.

Falkenlust is a country house with symmetrical avant-corps. On the ground floor, an oval salon is conceived in the same language of improvisation, charm, and liberty François de Cuvilliés was known for in his work. In the Chapel, the Bordelais Laporterie, an astonishing marine grotto was created, its walls faced with shells and concretions.

The large gardens of Augustusburg and Falkenlust, laid out in a single campaign, both oppose and complement each other.

At Augustusburg, Dominique Girard (ca. 1680 – 1738, pupil of Le Nôtre) proved more aware of landscape decor, multiplying monumental ramps and symmetrical flowerbeds, as those of the gardens of Nymphenburg, Schleissheim, and the Belvedere of Vienna. The core of the gardens, situated on the south side of the Castle, is a two-part embroidery-like parterre that includes four fountains and the Mirror Pool fed by a small cascade, running from a circular basin with an impressive fountain. Alleys lined with lime-trees flank the embroidery parterre and lead to triangular boscages. The adjoining semi-circular park is enclosed by a ditch and a wall. The main alley is crossed diagonally by a second pathway, lined with lime trees, and leads south-east through the field to the Castle of Falkenlust.

At Falkenlust, the landscaping, although highly concentrated, nonetheless endeavours to create the randomness of a natural site.

Criterion (ii): Augustusburg and Falkenlust represent the first important creations of Rococo style in Germany. For more than a century, they were a model in the majority of the princely courts.

Criterion (iv): The castles and gardens of Augustusburg and Falkenlust are the eminent example of the large princely residence of the 18th century.

The whole site comprising the Castle of Augustusburg, its park and gardens, and the Castle of Falkenlust, contains all the elements necessary to express the Outstanding Universal Value.

The original overall design of the Castles has been maintained to an exceptional extent. It has preserved its character as a Rococo electoral residence and has, in large part, been spared any subsequent transformations due to continued use and function as a residence and museum.

The gardens of Augustusburg Castle are among the few in Europe to have been restored to their original plan. They can be said to be the most authentic example of formal gardens in the French style outside of France.

The laws and regulations of the Federal Republic of Germany and the State of North Rhine-Westphalia guarantee the consistent protection of the Castles of Augustusburg and Falkenlust. They are listed monuments according to § 2 and § 3 of the Act on the Protection and Conservation of Monuments in the State of North Rhine-Westphalia. Building activities within and outside the property are regulated by § 9 (2) Protection Law, Local Building Plans and regional Land Use Plans. Furthermore, the property is protected by the Federal Nature Conservation Act. The castles are opened to the public as museums.

The State of North Rhine-Westphalia, as owner of the property, is responsible for the budget, the management, the conservation, and the sustainable use of the World Heritage site. Construction and conservation issues are organized and managed in close co-operation with the Office for the Conservation of Monuments of the Rhineland Regional Council (LVR – Amt für Denkmalpflege). The management system consists of a set of maintenance and conservation measures which is checked yearly and updated when required by a Steering Committee; members are representatives of the State, the District Government Office Cologne, the Palace Administration, and the Monument Conservation Office.