The first Buddhist cave monuments at Ajanta date from the 2nd and 1st centuries B.C. During the Gupta period (5th and 6th centuries A.D.), many more richly decorated caves were added to the original group. The paintings and sculptures of Ajanta, considered masterpieces of Buddhist religious art, have had a considerable artistic influence. 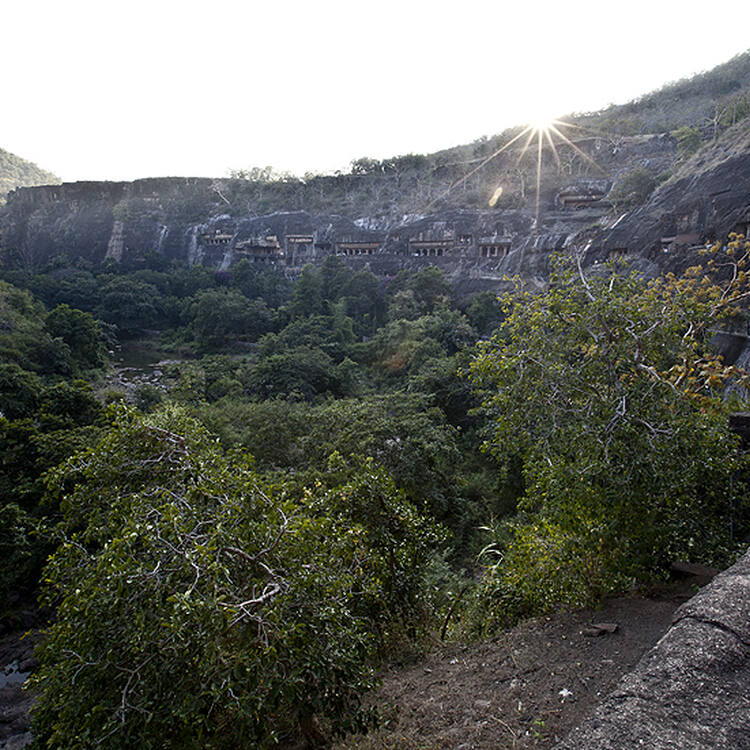 The caves at Ajanta are excavated out of a vertical cliff above the left bank of the river Waghora in the hills of Ajanta. They are thirty in number, including the unfinished ones, of which five (caves 9, 10, 19, 26 and 29) are chaityagrihas (sanctuary) and the rest, sangharamas or viharas (monastery). The caves are connected with the river by rock-cut staircases. The excavation activity was carried out in two different phases separated by an interval of about four centuries. The first phase coincides with the rule of the Satavahana dynasty from about the 2nd century BCE to the 1st century BCE, while the second phase corresponds to the Basim branch of the Vakataka dynasty with their Asmaka and Rishika feudatories in the 5th to 6th centuries CE.

Altogether, six caves (caves 8, 9, 10, 12, 13 and 15A) were excavated in the first phase by Hinayana/Theravadin followers of Buddhism, wherein Buddha was worshipped in an aniconic/symbolic form. These caves are simple and austere, and carry mural paintings sparsely. The chaityagrihas are characterized by a vaulted ceiling and an apsidal end, the façade dominated by a horseshoe-shaped window, known as chaitya window. Internally, they are divided by colonnades into a central nave and side aisles, the latter continuing behind the apse for circumambulation. At the centre of the apse stands the object of worship in the form of a chaitya or stupa, also hewn out of the rock. The monasteries consist of an astylar hall meant for congregation, and range of cells on three sides serving as the dwelling-apartments (viharas) for monks.

In the second phase, the rupestral activity was dominated by the Mahayana followers of Buddhism, where Buddha was worshipped in an icon/idol form. The earlier caves were reused, and several new ones were excavated. The architectural forms of the earlier phase continued, however, with a renewed architectural and sculptural fervour. The walls were embellished with exquisite mural paintings, executed in tempera technique; and pillars, brackets, door jambs, shrines and facades were richly decorated with sculptural splendour. The unfinished caves (caves 5, 24, 29) provide excellent evidences of techniques and methodology employed in rock excavation.

Ajanta Caves exemplifies one of the greatest achievements in ancient Buddhist rock-cut architecture. The artistic traditions at Ajanta present an important and rare specimen of art, architecture, painting, and socio-cultural, religious and political history of contemporary society in India. The development of Buddhism manifested through the architecture, sculptures, and paintings is unique and bears testimony to the importance of Ajanta as a major hub of such activities. Further, the epigraphic records found at Ajanta provide good information on the contemporary civilization.

Criterion (i): Ajanta is a unique artistic achievement.

Criterion (ii): The style of Ajanta has exerted a considerable influence in India and elsewhere, extending, in particular, to Java.

Criterion (iii): With its two groups of monuments corresponding to two important moments in Indian history, this rupestral ensemble bears exceptional testimony to the evolution of Indian art, as well as to the determining role of the Buddhist community, intellectual and religious foyers, schools and reception centres in India during the Satavahana and Vakataka dynasties.

Criterion (vi): Ajanta is directly and materially associated with the history of Buddhism.

Ajanta Caves includes all the elements necessary to express its Outstanding Universal Value, including the ensemble of these caves in its natural setting, sculptures, paintings, and epigraphs. It is of adequate size to ensure the complete representation of the features and processes that convey the intense art and architectural activity that continued for 800 years, reflecting Buddhist philosophy. It does not suffer from adverse effects of development and/or neglect. Interventions undertaken over the years were intended to strengthen the structure of the caves. Identified potential threats to the integrity of the property include visitor pressure in the painted caves, overall management of the protected site, structural stability of the caves including loose boulders, and capacity of the staff at the property.

The authenticity of Ajanta Caves is expressed through the architectural forms of chaityagrihas and viharas as well as the schemes used in decorating these spaces, such as sculptures and painted panels depicting various Buddhist traditions. Its location and setting, as well as its materials and substance, are likewise authentically associated with the history of Buddhism and with two important eras in the history of India.

The management of Ajanta Caves is with the Archaeological Survey of India (ASI), while the management of the buffer zone comes under stakeholders including the ASI, Forest Department, and Government of Maharashtra through various legislation such as the Ancient Monuments and Archaeological Sites and Remains Act (1958) and Rules (1959), Indian Forest Act (1927), and Forest Conservation Act (1980). These regulate any type of activity in prohibited and regulated areas, which extend 100 m and 200 m respectively from the protected site. Implementation of a Comprehensive Conservation Management Plan for the property is under way.

Sustaining the Outstanding Universal Value of the property over time will require addressing vital issues such as controlling the visitor pressure in the painted caves; overall management of the protected site; structural monitoring in the caves, monitoring the loose boulders; and capacity building of the staff at the property.