The List Baptism Site “Bethany Beyond the Jordan” ...
Print

Situated on the eastern bank of the River Jordan, nine kilometres north of the Dead Sea, the archaeological site consists of two distinct areas: Tell Al-Kharrar, also known as Jabal Mar-Elias (Elijah’s Hill) and the area of the churches of Saint John the Baptist near the river. Situated in a pristine natural environment the site is believed to be the location where Jesus of Nazareth was baptized by John the Baptist. It features Roman and Byzantine remains including churches and chapels, a monastery, caves that have been used by hermits and pools in which baptisms were celebrated, testifying to the religious character of the place. The site is a Christian place of pilgrimage. 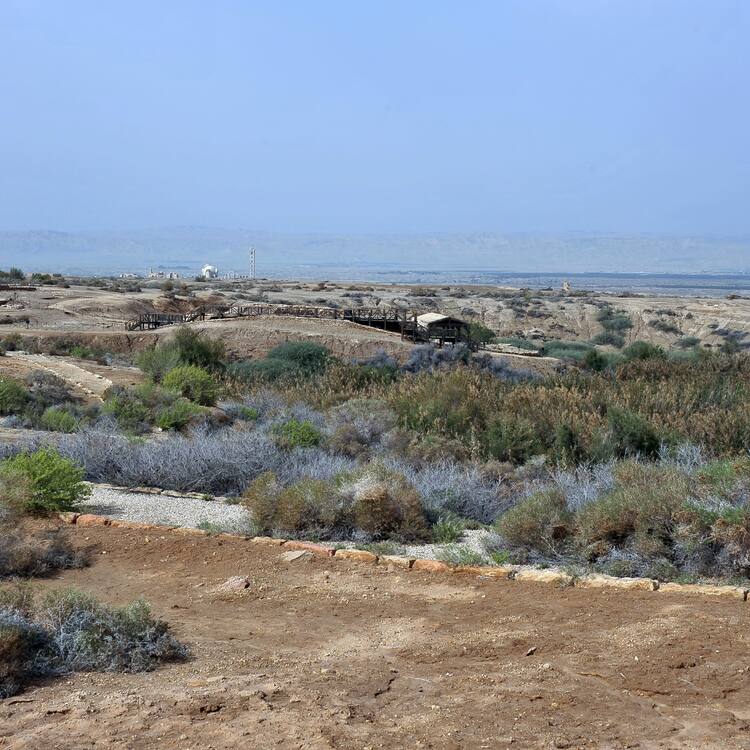 The Baptism Site “Bethany beyond the Jordan” (Al-Maghtas) is located in the Jordan Valley, north of the Dead Sea. The site contains two distinct archaeological areas, Tell el-Kharrar, also known as Jabal Mar Elias, and the area of the Churches of St. John the Baptist. “Bethany beyond the Jordan” is of immense religious significance to the majority of denominations of Christian faith, who have accepted this site as the location where Jesus of Nazareth was baptised by John the Baptist. This reference encouraged generations of monks, hermits, pilgrims and priests to reside in and visit the site, and to leave behind testimonies of their devotion and religious activities, dating to between the 4th and the 15th century CE. At present, the site has regained a popular status as pilgrimage destination for Christians, who continue to engage in baptism rituals on site.

Physical remains associated with the commemoration of the historic baptism event include a water collection system and pools as well as later built churches, chapels, a monastery, hermit caves, a cruciform baptismal pool, and a pilgrim station. These archaeological structures testify to the early beginnings of this attributed importance which initiated the construction of churches and chapels, habitation of hermit caves and pilgrimage activities. Beyond its key significance, the site is also associated with the life and ascension of Elijah (also called Elias) and Elisha, which is of common relevance to the monotheistic religions.

Criterion (iii): “Bethany beyond the Jordan” represents in an exceptional way the tradition of baptism, an important sacrament in Christian faith, and with it the historic and contemporary practice of pilgrimage to the site. This tradition is illustrated by the archaeological evidence, which references the practice of baptism since the 4th century. The majority of Christian connotations accepted that Bethany beyond the Jordan is the authentic location of Jesus of Nazareth’s baptism, a conviction which strongly characterized historic and present practice of the cultural tradition.

Criterion (vi): The Baptism Site, “Bethany Beyond the Jordan” (Al-Maghtas) is directly associated with the Christian tradition of baptism. The property is of highest significance to the majority of Christian denominations as the baptism site of Jesus of Nazareth and since millennia has been a popular pilgrimage destination. Its association to this historic event, believed to have taken place in the property, and the contemporary rituals which are continued at the Baptism Site illustrate the direct association with the Christian tradition of baptism.

The property area corresponds to the area administered by the Baptism Site Commission. It is maintained as a wilderness area and locates within all the known archaeological remains which are attributes of Outstanding Universal Value. All the elements necessary to read and understand the significance conveyed by the property are still present and are encompassed by the area. The size of the property allows the whole valley to be viewed and appreciated by visitors and in most directions integrates the wider setting of the Jordan Valley. The property is well protected through heritage legislation and a construction moratorium has been issued and prevents any new constructions within the property.

Envisaged new structures in the buffer zone are subject to construction guidelines. In addition, the churches and the planned pilgrimage village should further be considered through comprehensive Heritage Impact Assessments (HIA) before any approval is granted for their construction.

The Baptism Site “Bethany beyond the Jordan” (Al-Maghtas) is considered by the majority of the Christian Churches to be the location where John the Baptist baptised Jesus. The continuing pilgrimage and veneration of the site is a credible expression of the spirit and feeling attributed to it and the atmosphere, which the property conveys to the believers. As the location of Jesus’ baptism is described as wilderness, the preservation of the Zor, the green wilderness along the Jordan River, is essential to maintain this attribution. Despite the large volume of visitors to the site, a wilderness feeling still exists, which is enhanced by the natural materials and simple local construction technology that was used to build the shelter structures and visitor rest areas.

As an important religious site, several Christian Churches desire to have their presence in places of veneration and accordingly locations just outside the property have been and continue to be allocated for the construction of churches. Although these recent structures could be seen as compromising the authenticity of the setting of the site, they do not presently impinge on or negatively impact the central area containing the archaeological remains.

The archaeological areas have been preserved in their original materials, but have in many places been restored adding similar materials from the area to allow for easier interpretation or use of the structures. In some cases archaeological fragments have been reassembled and at times restoration work undertaken could be seen as reducing the       authenticity in material and workmanship. However, this reduction of material authenticity does not affect the significance or credibility attributed to the site by Christian believers.

The property is designated as an antique site according to Antiquities Law 21/1988, art. 3, par 8. This law prohibits destruction, damage or alteration of the antiquity itself and regulates development works around it, so as to avoid major impact on the antiquity and on its contextual perception. The property and its buffer zone are likewise protected by the Jordan Valley Authority Laws and on the site level by the By-Laws of the Baptism Site Commission. The objective of these laws is to protect the property from potential future threats, focused mainly on development and tourism projects that might jeopardize the nature and character of the site and its immediate surroundings. A construction moratorium was issued for the property preventing any new constructions except those exclusively dedicated to the protection of archaeological remains.

The veneration of the place, the presence of several church communities and the continuing pilgrimage add a level of traditional protection. It is not in the interest of the Christian communities that the property changes its character and accordingly visitation is arranged with respect to the site’s significance. The protection measures of both the national level and in particular the Baptism Site Commission are effective and will, if consistently implemented, prevent negative impacts to the property. The World Heritage Committee further encouraged all concerned State Parties to ensure the protection of the western banks of the Jordan River to preserve important vistas and sightlines of the property.

The authority responsible for the management of the Baptism Site “Bethany Beyond the Jordan” is the Baptism Site Commission, which is directed by an independent board of trustees appointed by H.M. King Abdullah II bin al-Hussein and chaired by H.R.H. Prince Ghazi bin Muhammad. Revenues generated on site are utilized for the administration and management of the property. As result of these adequate financial resources, the management team is well staffed and qualified.

The management is guided by a management plan adopted in May 2015. The management plan is a comprehensive analytical tool of the present state of conservation and might require some further streamlining to guide management strategies and activities in the future. The foreseen regular revision in an interval of five years will assist in this context. The current management arrangements already in place are largely adequate. Visitor access is controlled at one single entrance gate, which allows not only for the control of visitor numbers but also for the distribution of information and specific paths are laid out on site for the visitor walks and pilgrim processions to protect the remaining character of wilderness.