From c. 100 B.C. to A.D. 1300, the Sierra de San Francisco (in the El Vizcaino reserve, in Baja California) was home to a people who have now disappeared but who left one of the most outstanding collections of rock paintings in the world. They are remarkably well-preserved because of the dry climate and the inaccessibility of the site. Showing human figures and many animal species and illustrating the relationship between humans and their environment, the paintings reveal a highly sophisticated culture. Their composition and size, as well as the precision of the outlines and the variety of colours, but especially the number of sites, make this an impressive testimony to a unique artistic tradition. 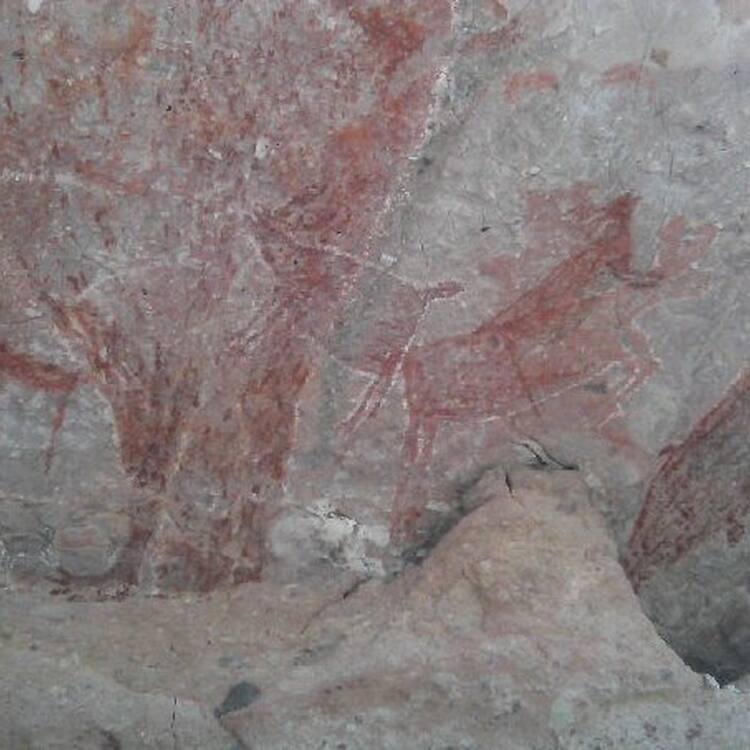 The central part of Baja California peninsula is a region of Mexico that concentrates one of the most extraordinary repertoires of rock art in the country, the Rock Paintings of the Sierra de San Francisco. The region is insular-like and kept the native peoples relatively isolated from continental influences, allowing the development of local cultural complex. One of the most significant features of the peninsular prehistory is the mass production of rock art since ancient times and the development of rock art tradition of the Great Murals.

The Sierra de San Francisco is the mountain range which concentrates the most spectacular and best preserved Great Mural sites, scale wise one of the largest prehistoric rock art sites in the world. Hundreds of rock shelters, and sometimes huge panels with hundreds and even thousands of brightly painted figures, are found in a good state of conservation. The style is essentially realistic and is dominated by depictions of human figures and marine and terrestrial fauna, designed in red, black, white and yellow, which illustrate the relationship between humans and their environment, and reveal a highly sophisticated culture. The paintings are found on both the walls and roofs of rock shelters in the sides of ravines that are difficult of access. Those in the San Francisco area are divided into four main groups - Guadalupe, Santa Teresa, San Gregorio and Cerritos. The most important sites are Cueva del Batequì, Cueva de la Navidad, Cerro de Santa Marta, Cueva de la Soledad, Cueva de las Flechas and Grutas del Brinco.

The landscape of the area is another significant attribute, understood as the extensive physical space in which, through rock art, the thoughts of their early dwellers, hunter-gatherers people who living here from the terminal Pleistocene (10,000 BP) until the arrival of Jesuit missionaries in the late seventeenth century, are expressed.

Cultural traditions, with roots back to the XVIII century, persist and the Sierra has a strong social value in the role that culture plays in the preservation of the traditional links between mountain communities and the South Californians and Mexicans in general.

Criterion (i): The rock art of the Sierra de San Francisco region of Baja California is one of the most outstanding concentrations of prehistoric art in the world and a dramatic example of the highest manifestations of this human cultural expression.

Criterion (iii): The Sierra de San Francisco complex is illustrative of a strong human cultural group that existed in the harsh climatic region of the Baja California peninsula, but which disappeared rapidly after contact with European settlers for a variety of causes.

The Rock Paintings of the Sierra de San Francisco encompass an area of 183, 956 ha, where more than 400 sites have been recorded, the most important of them within the reserve, near San Francisco and Mulege, over 250 in all. The inscribed property contains an exceptional repertoire of rock art that convey its Outstanding Universal Value. The sites have remained virtually intact and still have a good state of conservation. The integrity of rock painting sites and their surroundings has been maintained largely due to the situation of isolation and the low population density that prevails in the region.

The Rock Paintings of the Sierra de San Francisco are entirely authentic. Investigation and limited conservation projects have been minimal and have not jeopardized the materials, forms nor have they largely disturbed the sites.

The Rock Paintings of the Sierra de San Francisco are protected by the 1972 Federal Law on Historic, Archaeological and Artistic Monuments and Zones and fall under the protective and research jurisdiction of National Institute of Anthropology and History (INAH). In addition, the property is entirely within the Vizcaino Biosphere Reserve; which grants it with additional protection. The Management Plan has been in operation since 1994 and has proved a successful strategy in the administration of cultural resources of the property. This model emphasizes the importance of defining the meaning of this heritage site, so that all management strategies are consistently directed toward the preservation of the values that make it important. Another key feature is the total involvement of all those groups that have an interest in the area under discussion. The Management Plan focuses on issues such as mitigation of the impact of visitors on sites and control and monitor of access. Some measures included the installation of reversible infrastructure in seven of the most visited rock painting sites and the definition of authorized access paths, the areas open to the public or restricted, and four levels of access for tourists. This system allows visitors to experience a wide range of sites and at the same time protects the majority of those who are very well preserved. In this sense the most popular sites have remained open under this Management Plan. Threats remain that have to be addressed, including those derived from the proposals to construct roads within the protected area which would jeopardise the existing integrity between the landscape and the rock art sites.

The medium and long term management expectations include obtaining additional legal protection through the presidential declaration of the area; allocating permanent custodian positions to improve monitoring, enhance the administrative and technological infrastructure of Sierra de San Francisco Information Unit located in San Ignacio town, capacity building for the custodians and guides and improvement of low-impact infrastructure for services.