This karst landscape in the state of New Mexico comprises over 80 recognized caves. They are outstanding not only for their size but also for the profusion, diversity and beauty of their mineral formations. Lechuguilla Cave stands out from the others, providing an underground laboratory where geological and biological processes can be studied in a pristine setting. 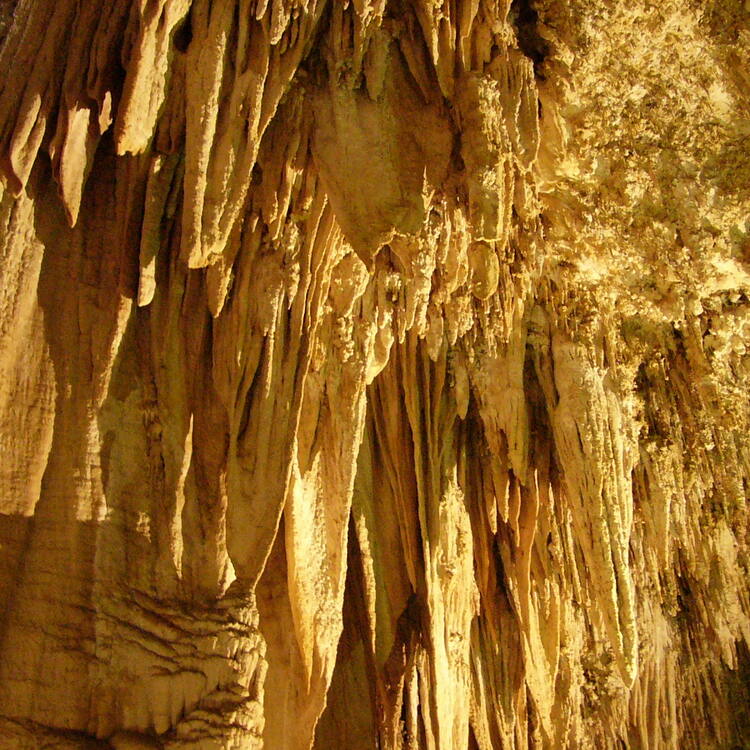 The more than 120 limestone caves within Carlsbad Caverns National Park are outstanding and notable world-wide because of their size, mode of origin, and the abundance, diversity and beauty of the speleothems (decorative rock formations) within. On-going geologic processes continue to form rare and unique speleothems, particularly in Lechuguilla Cave. Carlsbad Caverns and Lechuguilla Cave are well known for their great natural beauty, exceptional geologic features, and unique reef and rock formations. The Permian-aged Capitan Reef complex (in which Carlsbad Caverns, Lechuguilla and other caves formed) is one of the best preserved and most accessible complexes available for scientific study in the world.

Criterion (vii): The park’s primary caves, Carlsbad and Lechuguilla, are well known for the abundance, diversity, and beauty of their decorative rock formations. Lechuguilla Cave exhibits rare and unique speleothems, including the largest accumulation of gypsum “chandeliers,” some of which extend more than six meters (18 feet) in length.

Criterion (viii): Carlsbad Caverns National Park is one of the few places in the world where on-going geologic processes are most apparent and rare speleothems continue to form, enabling scientists to study geological processes in a virtually undisturbed environment. These speleothems include helictites forming underwater, calcite and gypsum speleothems, and an astonishing collection of “biothems,” cave formations assisted in their formation by bacteria. Researchers can study both the Capitan reef’s inside through cave passages that penetrate in and through it as well as eroded canyon-exposed cross sections outside.

Aside from a relatively small percentage of the park which sees significant visitation, access to the backcountry caves is strictly controlled and limited. In Carlsbad Cavern, infrastructure and heavy visitation have caused significant changes to the delicate ecosystem. Invertebrate transects throughout Carlsbad Cavern have shown that infrastructure has changed cave habitats, and that materials left by visitors, such as hair, trash, and lint, have altered population distributions as well as the ecosystem as a whole. Research on microbes in both Spider and Lechuguilla Caves has been vital in improving our understanding of the role they play in geologic processes.

Outside pressure from oil, gas, and water extraction have the potential to impact cave and karst resources, as well as biological and even cultural resources of the park. Oil and gas development, including their associated drilling and seismic activities have continued to expand around and towards the park. The city of Carlsbad and other local users have increased the amount of water extracted from the Capitan Aquifer, a karst aquifer that underlies the park. Because these activities have the potential to adversely impact cave and karst resources in the park, it is vital that the park continue to identify and monitor those resources.

Designated by the U.S. Congress in 1930 as a national park, Carlsbad Caverns National Park is managed under the authority of the Organic Act of August 25, 1916 which established the United States National Park Service. In addition, the park has specific enabling legislation which provides broad congressional direction regarding the primary purposes of the park. Numerous other federal laws bring additional layers of protection to the park and its resources. Cave specific legislation includes the Federal Cave Resources Protection Act of 1988 and the Lechuguilla Cave Protection Act of 1993, the latter of which was created to protect that specific cave from extractive activities near the park. Day to day management is directed by the Park Superintendent.

Park management plans for the property have identified a number of resource protection measures, such as environmental assessment processes, zoning, ecological integrity, visitor monitoring, and education programs to address pressures arising from issues both inside and outside the park.

Long-term protection and effective management of the site from potential threats require continued monitoring of resource conditions, additional research, and assessment of potential threats. The NPS Inventory and Monitoring (I&M) program, and the Chihuahuan Desert I&M network, of which Carlsbad Caverns National Park is a part, have developed several “vital signs” to track a subset of physical, chemical and biological elements and processes selected to represent the overall health or condition of park resources. In Carlsbad Caverns National Park, these vital signs include air quality, climate, invasive plants, landbirds, landscape dynamics, spring ecosystems, uplands vegetation and soils. Air quality monitoring of volatile organic compounds is used to determine threats from sources outside of the park, especially from adjacent oil and gas fields.