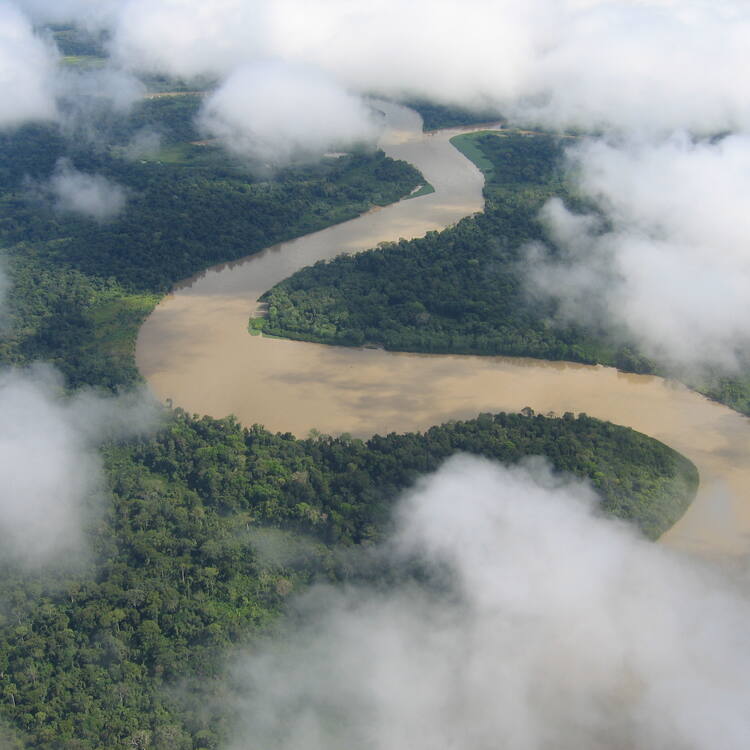 Darien National Park extends across some 575.000 hectares in the Darien Province of Southeastern Panama. The largest protected area in Panama, Darien is also among the largest and most valuable protected areas in Central America. The property includes a stretch of the Pacific Coast and almost the entire border with neighbouring Colombia. This includes a shared border with Los Katios National Park, likewise a World Heritage property. From sea level to Cerro Tacarcuna at 1,875 m.a.s.l., the property boasts an exceptional variety of coastal, lowland and mountain ecosystems and habitats. There are sandy beaches, rocky shores and mangroves along the coast, countless wetlands, rivers and creeks, palm forests and various types of rainforest, including the most extensive lowland rainforest on Central America's Pacific Coast. The property is also culturally and ethnically diverse, as evidenced by major archaeological findings, as well as Afro-descendants and indigenous peoples of the Embera, Wounaan, Kuna and others living within the property to this day. Darien National Park was groundbreaking by explicitly including a cultural dimension in the management and conservation of a protected area.

The large size and remoteness across a broad spectrum of habitats favour the continuation of evolutionary processes in an area of both cultural significance and exceptional diversity of flora and fauna with a high degree of endemism in numerous taxonomic groups. With future research likely to lead to further discoveries, hundreds of vertebrates and thousands of invertebrates have already been recorded. Among the impressive 169 documented species of mammals are the critically endangered Brown-headed Spider Monkey, the endangered Central American Tapir, the vulnerable Giant Anteater and near-threatened species like Jaguar, Bush Dog and White-lipped Peccary. The more than 530 recorded species of birds include the endangered Great Green Macaw, the vulnerable Great Curassow and a major population of the near-threatened Harpy Eagle.

Criterion (vii): The diversity of natural features in the property at the scale of a large and mostly undisturbed landscape is breathtaking. From the Pacific Coast to the highest peak of Darien Province, Darien National Park is one of the most diverse regions in all of Central America with an extraordinary range of landscapes. The main ranges, the Darien Range in the North, Pirre and Setetule in the heart of the property and the Sapo and Jurado Ranges in the South, are of volcanic origin, as illustrated by tuffs and lava. The many beautiful rivers and creeks, in particular the mighty Tuira and Balsas Rivers, are the arteries of the property. Of major importance for wildlife, they also serve as the only access and travel routes for inhabitants, researchers, visitors and park staff throughout most of the property to this day.

Criterion (ix): Biogeographically speaking, the location at the southernmost end of the geologically young land bridge connecting South America and Central America is a rare and scientifically fascinating setting. Darien National Park is within the area of first contact and interchange between two major, previously isolated landmasses, which is reflected in its biodiversity. The property is within the Southern limit of Mesoamerican elements of flora and fauna while also being influenced by elements of South American rainforests, a link between Central and South America all the way to the Amazon. The property contains the most extensive lowland tropical forest on the Pacific coast of Central America, permitting the conservation and continuation of ecological and evolutionary processes at a large scale. The uninterrupted altitudinal transition of different forest types from the coastal lowlands to the mountains allows the migration, of many species, an increasingly rare large-scale setting and interaction between different ecosystems which contributes to resilience in the face of anticipated climate change.

Criterion (x): Hundreds of vertebrates and thousands of invertebrates have been recorded in Darien National Park. With detailed research still scarce, there is an almost certain potential for further discoveries, especially in the poorly known and isolated cloud forests in higher elevations. Among the impressive 169 documented species of mammals are the critically endangered Brown-headed Spider Monkey, the endangered Central American Tapir, the vulnerable Giant Anteater and near-threatened species like Jaguar, Bush Dog and White-lipped Peccary. The many other charismatic species include Puma, Ocelot, Margay and Jaguarundi. The avifauna is particularly rich with 533 recorded species, for instance the endangered Great Green Macaw, the vulnerable Great Curassow and a major population of the near-threatened Harpy Eagle. There is a notable diversity of reptiles and amphibians with 99 and 78 confirmed species, respectively. The probably incomplete inventory of freshwater fish stands at 50. Endemism is considerable across many taxonomic groups of flora and fauna. There are even several endemic tree species among the more than 40 recorded endemic plants. A number of endemic mammals are restricted to the property, for instance the Darien Pocket Gopher and Slaty Slender Mouse Opossum.

With its approximately 575,000 hectares, the Darien National Park is Panama's by far largest protected area, conserving a diverse and largely unaltered landscape. The scale and inaccessibility of the property and the coverage of the complete altitudinal variation from the Pacific Coast to the highest peak of the Province add up to promising conservation prospects. It also deserves to be mentioned that there are several other protected areas in the vicinity, including, most prominently, the contiguous Los Katios National Park, a World Heritage property of 72.000 hectares in neighbouring Colombia. Unlike in small, increasingly isolated protected areas, this situation allows for viable populations of flora and fauna, including large predators, provided adequate management can be assured. From an integrity perspective it is noteworthy that the property edges on a part of the Pacific known for its very high conservation values, with many species of cetaceans, marine top predators and several species of marine turtles. Given the interaction between marine and terrestrial ecosystems, as exemplfied most strikingly in the vast mangroves, an integrated consideration of marine values in regional conservation strategies may further add to the integrity of Darien National Park. Challenges to the future integrity of Darien National Park stem from possible changes of resource use patterns and intensity of inhabitants of the property, pressures from the advancing agricultural frontier in neighbouring areas, and the possible completion of the Pan-American Highway and other infrastructure.

Part of what is today the property has been under formal protection since 1972, when the Alto Darien Protection Forest was declared. The latter was reclassified as a national park by Presidential Decree in 1980. World Heritage status since 1981 and international designation as a biosphere reserve by UNESCO and parts of the area by the Ramsar Convention add a layer of recognition and protection. Darien National Park is state-owned with customary tenure of the indigenous inhabitants accepted in a part of the property. Originally managed by the National Institute for Renewable Natural Resources (INRENAREA), Darien National Park is today under the authority of the National Environmental Authority (ANAM). The private non-profit organisation ANCON was a major long term supporter, with additional technical and financial contributions from various international agencies and non-governmental organisations. A particularity of the border setting is the strategic importance of the dense mountain forests of the Darien Gap as a natural barrier to livestock diseases, with corresponding legal requirements applicable to parts of the park.

Despite the size, remote location and contiguity with adjacent conservation areas in Panama and neighbouring Colombia, the property has not escaped human pressure. It is necessary to further engage in participatory natural resource management with the communities living in the property, respecting local rights while preventing developments incompatible with conservation objectives. Zonation is used as an adequate management tool to this end. The expanding agricultural frontier and related colonization near the property have resulted in major deforestation and timber extraction and continue to occur in poorly controlled fashion. Responses are needed to prevent undesired development from extending into the property. The border setting presents certain challenges, including security considerations, but also opportunities, such as for example, cooperation and coordination with Los Katios National Park in neighbouring Colombia, a World Heritage property within a shared ecosystem with a common cultural and ethnic history. Broader development in the transboundary region has been controversially debated for decades. Of particular conservation concern is the possible completion of the Pan-American Highway, which would likely induce fundamental change to an area that continues to be difficult to access. Other potential infrastructure projects likewise require careful assessments of benefits and negative social and environmental impacts.