The monastery is an outstanding repository of four centuries of Spanish religious architecture. It symbolizes two significant events in world history that occurred in 1492: the Reconquest of the Iberian peninsula by the Catholic Kings and Christopher Columbus' arrival in the Americas. Its famous statue of the Virgin became a powerful symbol of the Christianization of much of the New World. 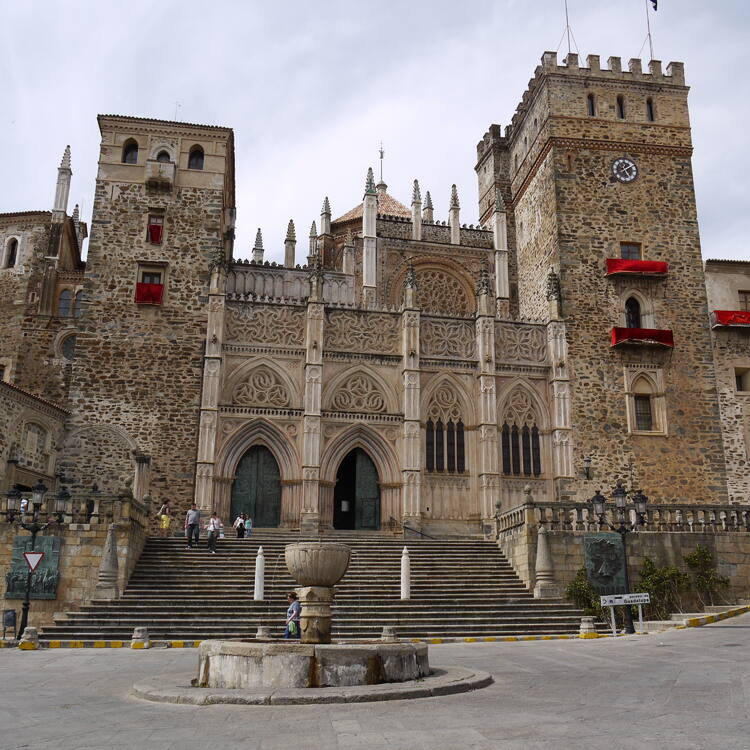 The Royal Monastery of Santa María de Guadalupe is located in the province of Cáceres (Autonomous Community of Extremadura, Spain) at a location of great beauty, overlooking a valley surrounded by high mountains. The town of Guadalupe, built around the Monastery, whose foundation dates back to 1337, offers in its medieval buildings a unique beauty that reflects the traditional architecture in an urban context.

It is an exceptional example of an ensemble comprised of widely differing architectural styles, including in particular the 14th- to 15th-century Mudéjar church and cloister. The following architecture from different periods is worth underscoring: the Basilica (main church) or Templo Mayor – with a façade notable for its Mudéjar works, its doors ornamented with finely-worked bronze plaques, the interior nave and two side aisles with fine ornamented vaulting, and many richly decorated tombs and altars. The sacristy built between 1638 and 1647is abundantly decorated and best known for the series of paintings by Zurbarán and wall paintings that highlight the austere lines of its architecture. The Chapel of Santa Catalina of Alejandría, a square building that links the Sacristy with the Reliquaries Chapel, has an octagonal cupola lit by a lantern, contains some outstanding 17th-century tombs, and houses many elaborate reliquaries and other works of art in its arcaded alcoves. The Camarín de la Virgen, a small octagonal building situated behind the presbytery of the basilica is amply decorated in Baroque style. Of special interest is the upper storey, the “Chamber of the Virgin” proper, in which the vaults are richly decorated in plaster and stucco and the walls covered with paintings, among them nine by Luca Giordano. It houses the famous statue of the Virgin of Guadalupe on a magnificently ornamented throne. The cloister was constructed in brick in the Mudéjar tradition and painted in white and red. The small chapel in the centre dates from 1405, and there is an impressive portal ca. 1520-24 in Plateresque style. The Gothic cloister has galleries on three sides with three tiers of arches, and the New Church, in modified Baroque style, has three naves.

The site has played a leading role in the history of medieval and modern Spain, being linked to the Crown of Castile from the reign of Alfonso XI and the other Peninsular kingdoms – particularly after the conquest of Granada, which resulted in the unification of all territories, the emergence of the Modern State in Europe, the end of the period of the Reconquest, and the discovery of the New World.

Its influence in the evangelisation of the discovered land has been enormous, spreading sanctuaries, institutions, and offerings in honour of the Virgin of Guadalupe, whose validity and relevance is still alive. The monastery was also a leading cultural centre for workshops and scientific activity: a centre which spread knowledge of botany and medicine through the Medical School of Guadalupe, first mentioned in 1451, or through the School of Surgery. It was also a centre where techniques were applied and experimented in luxury goods and music. This relevance is today portrayed in specific museums within the monastery.

Criterion (iv): The Monastery of Guadalupe is of exceptional interest as an ensemble of religious architecture spanning some six centuries.

Criterion (vi): The Monastery symbolises two significant events in world history that occurred in the same year, 1492, namely the final expulsion of the Muslim power from the Iberian Peninsula and the discovery of the American continent by Christopher Columbus. Its influence on the evangelisation of the Americas was substantial; the statue of Santa María de Guadalupe became a powerful symbol of the Christianisation of much of the New World. The Monastery was, and remains, a centre of pilgrimage for the Western world and Latin America.

The property covers an area of 1.10 ha, with a 44 ha buffer zone and contains all the necessary elements to convey its Outstanding Universal Value. Material integrity has been largely preserved given that the monastery has been in continuous use since its construction. Restoration and maintenance works have been carried out continuously since 1908 but no interventions have caused alterations to the monument.

Currently inhabited and governed by the Franciscan community, the monastery retains all its heritage richness and strength, welcoming many visitors, tourists, and pilgrims all year round and during particular holidays, and therefore maintaining its functional integrity.

Like any religious establishment that has been in use constantly since its construction, the monastery has buildings of different styles and periods. Inhabited for more than four centuries by the same Order, the Order of St. Jerome, it has undergone restorations and reconstruction works. However, the ensemble retains its original form and appearance. The most recent restoration works have met modern conservation standards.

The Franciscan community, with the necessary support of national, regional, and provincial institutions, has maintained, in addition, an interesting cultural work through the study and publication of its archives and the formation of a large library well catalogued and used by researchers.

The Royal Monastery of Guadalupe belongs jointly to the Archbishopric of Toledo, the Government of Spain, and Bética Province of the Franciscan Order, as stipulated in the Royal Ordinance of 20 May 1908 and 22 May 1915, and the canonical Decree of 8 August 1908.

The Law 16/1985 on Spanish Historical Heritage legally protects the property and the Law 2/1999 on Historical and Cultural Heritage of Extremadura. The Royal Decree as a National Historic and Artistic Monument in 1879 was expanded to the whole of its buildings in 1929. In addition, the monastery, located in the town of Guadalupe, was declared a Historical-Artistical Complex in 1943.

Direct management of the property is the responsibility of the regional Government of Extremadura in partnership with the Franciscan community of Guadalupe. The management is carried out according to a Master Plan developed in 2006, which rationalises the interventions and contains a detailed study of the needs and conditions of the different buildings. In addition to setting objectives and methodology, the Plan is a valuable tool to optimise resources and channel investments from administrations (regional and central governments), the Franciscan community, and private entities involved.

The Town Council of Guadalupe is responsible for preparing and revising the General Municipal Plan for the urban planning of the municipality, including a Special Protection Plan for the Historical-Artistical Complex and the establishment of a buffer zone.

The Royal Monastery has the subsidiary protection of Integrated Rehabilitation Area of Guadalupe, an office under the authority of the Directorate General of Cultural Heritage of the Department of Education and Culture of the regional government, which has a priority task of safeguarding cultural properties in the region, ensuring compliance with current national and regional legislation and maintaining the Outstanding Universal Value of the property. In order to achieve these goals, it has organised new offices for heritage site management.