The List Franciscan Missions in the Sierra Gorda of ...
Print

Franciscan Missions in the Sierra Gorda of Querétaro

Franciscan Missions in the Sierra Gorda of Querétaro

The five Franciscan missions of Sierra Gorda were built during the last phase of the conversion to Christianity of the interior of Mexico in the mid-18th century and became an important reference for the continuation of the evangelization of California, Arizona and Texas. The richly decorated church façades are of special interest as they represent an example of the joint creative efforts of the missionaries and the Indios. The rural settlements that grew around the missions have retained their vernacular character. 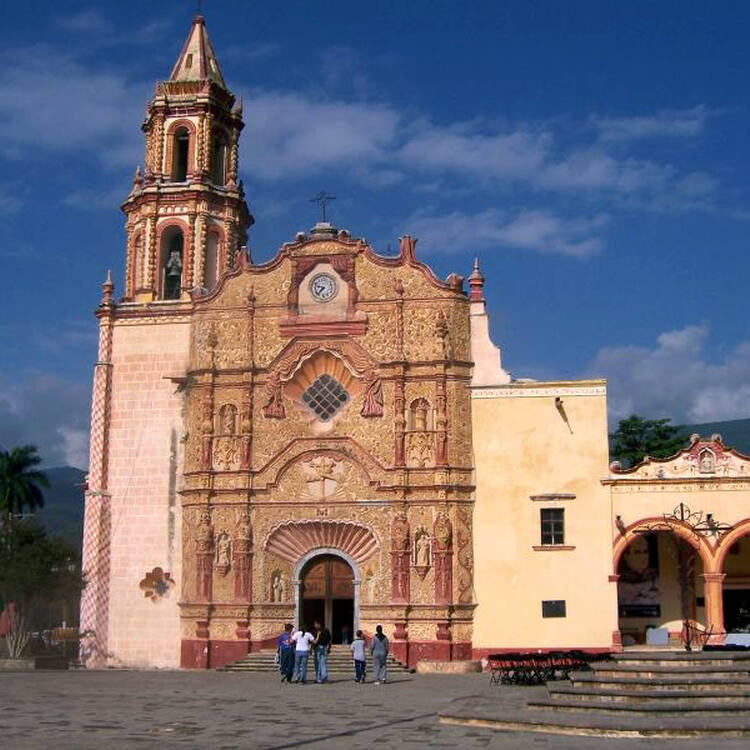 Franciscan Missions in the Sierra Gorda of Querétaro © Temo Rivera

They witness the cultural coexistence between different social groups and their environment and became an important reference for the continuation of the evangelisation and colonisation of California, Arizona and Texas. The missions, in particular the richly decorated façades of the churches, are a manifestation of the joint creative efforts of the missionaries and the existing indigenous groups, resulting after an exchange of values and influences. They are a testimony of the cultural coexistence between two societies and the natural environment. The rich iconographic elements express the creative work and a faithful reflection of the spirituality and vision of both cultures.

The missions represent both architectural and artistic manifestations that are the most relevant within the Franciscan evangelist route that led to the conquest and evangelization of the northern area of Mexico. They evidence the Franciscans’ perseverance and capacity to evangelize isolated ethnic groups who lived in inhospitable territories.

The emplacement as well as the formal characteristics and techniques used in the Franciscan Missions in the Sierra Gorda are determined by three significant and unifying elements, these are: the natural environment, the urban layout and the religious complex. Their position in the Sierra Gorda mountainous system generates a landscape interaction between the natural elements and the built ones. These conditions were used as guidelines for the basic layout of those towns. In addition, the missions were used as a way of organizing the local indigenous populations, setting up an example of shared participation in the creation of a new system of urban arrangement and a building process. The architecture of the missions is designed following a general pattern, although there are individual differences. Their features are reminiscent of 16th-century convents, and generally include an atrium, a sacramental doorway, an open chapel, processional chapels and a cloister. Some features are also taken from Mexican Baroque art of the 17th and 18th centuries, evidenced in the cross-shaped ground plan of the church, the carved and stuccoed facade, and the use of lime plaster in the interior. The buildings are made from local stone, and have colouring plaster rendering.

The Franciscan Missions in the Sierra Gorda are a living heritage that preserves its structure, its original use as religious centres of great importance in this area and are also cultural spaces that allow the reproduction and continuity of regional living traditions and shapes. The rural settlements that grew around the missions have retained their vernacular character.

Criterion (ii) The Sierra Gorda Missions exhibit an important interchange of values in the process of evangelization of central and northern Mexico, and the western United States.

Criterion (iii) The five Sierra Gorda Missions bear witness to the cultural encounter of the European missions with the nomadic populations of central Mexico, remaining a significant testimony to this second phase of evangelisation in North America.

The built religious complexes of the Franciscan Missions in the Sierra Gorda of Queretaro preserve the composition of their original elements. The mixed architecture of these monuments is the result of a new and singular architectural identity typical of this region which has been integrated with the surrounding landscape. They were created as spaces for the religious cult and nowadays, they are also used as a centre for diverse activities related to the culture of its inhabitants. This heritage preserves its main use, and its original characteristics have not been modified. However, the protection of the setting is an important challenge to address in light of expansion of urban and rural sprawl.

The conditions of the authenticity of the Franciscan Missions in the Sierra Gorda of Queretaro are substantiated by the tight link between these buildings and the characteristics and attributes of the natural environment as well as the originality, diversity and opulence of the decorative language of the Mexican baroque as represented by the indigenous craftsmen in the facades. The basic design criteria of such missions were already established in the 16th and 17th centuries. While taking the main elements of the earlier schemes, the Missions give a new interpretation to them in the vernacular context. The aesthetic originality is in the external decoration of the churches, which has strong indigenous component in the selection of themes and execution. The buildings have faced a period of neglect, losing some of their features. Partly this was due to the renovation of the interiors in a sober neo-classical expression, common in the 19th century. The recent restoration of the five missions was based on a thorough research, and was carried out in an appropriate manner by qualified teams. The historic stratifications and changes were duly respected. It has also been possible to reveal and reintegrate the original polychrome colour schemes of the church façades.

In spite of this, the architectural planning as well as the layout, the facades’ iconographic composition and the original materials used in the mission complexes have values that still exist. The missions function goes beyond the idea of a space used merely for the representation of catholic ceremonies, as it was and still is considered a milestone, the centre of urban outlines and also the symbol of the community’s identity.

The legal protection of the Franciscan Missions in the Sierra Gorda of Queretaro is granted through laws and existing legal standards at the federal, state and municipal levels. These include the Constitution of the United Mexican States, the General Law on Human Settlements, the General Law of Ecological Equilibrium and Environmental Protection, the 1972 Federal Law on Historic, Archaeological and Artistic Monuments and Zones and the Constitution of the Free and Sovereign State of Querétaro de Arteaga. The five towns and their Franciscan Missions in the Sierra Gorda are delimited by main conservation areas and buffer zones controlled by State and Municipal jurisdictions. There is a co-management scheme for the property that entails diverse authorities at the federal, state and local level as well as the social groups. The objective is to safeguard the monuments, the urban centres, and the natural areas where they are located. In addition, the surroundings of the human settlements and natural contexts regulated so that the integrity of the setting is maintained. The restoration works have been carried out continuously, as well as projects related to the improvement of the urban image of the localities. There is a management plan for the property, Plan for the Management and Conservation of the Franciscan Mission in the Sierra Gorda, which makes provisions that take into account the idea that the historical monuments are part of the daily lives of the population and the territory where they are located; and have tight bonds with the surrounding human settlements and natural environment. The intent is also to foster the operation of the cultural corridor; an instrument has been operating since 2005 and is implemented along with the Plan for the Management of the Natural Reserve of the Biosphere MAB Sierra Gorda.

In the long term, it is necessary to consolidate the Commission for the Implementation of the Plan for the Management and Conservation of the Franciscan Mission in the Sierra Gorda and its Consulting Board to further systematize management endeavours and improve the monitoring of the site