The List As-Salt - The Place of Tolerance and Urban ...
Print

As-Salt - The Place of Tolerance and Urban Hospitality

As-Salt - The Place of Tolerance and Urban Hospitality

Built on three closely-spaced hills in the Balqa highland of west-central Jordan, the city of As-Salt, was an important trading link between the eastern desert and the west. During the last 60 years of the Ottoman period, the region prospered from the arrival and settlement of merchants from Nablus, Syria, and Lebanon who made their fortunes in trade, banking, and farming. This prosperity attracted skilled craftsmen from different parts of the region who worked on transforming the modest rural settlement into a thriving town with a distinctive layout and an architecture characterized by large public buildings and family residences constructed of local yellow limestone. The site’s urban core includes approximately 650 significant historic buildings exhibiting a blend of European Art Nouveau and Neo-Colonial styles combined with local traditions. The city’s non-segregated development expresses tolerance between Muslims and Christians who developed traditions of hospitality evidenced in Madafas (guest houses, known as Dawaween) and the social welfare system known as Takaful Ijtimai’. These tangible and intangible aspects emerged through a melding of rural traditions and bourgeois merchants’ and tradespeople’s practices during the Golden Age of As-Salt’s development between 1860s to 1920s. 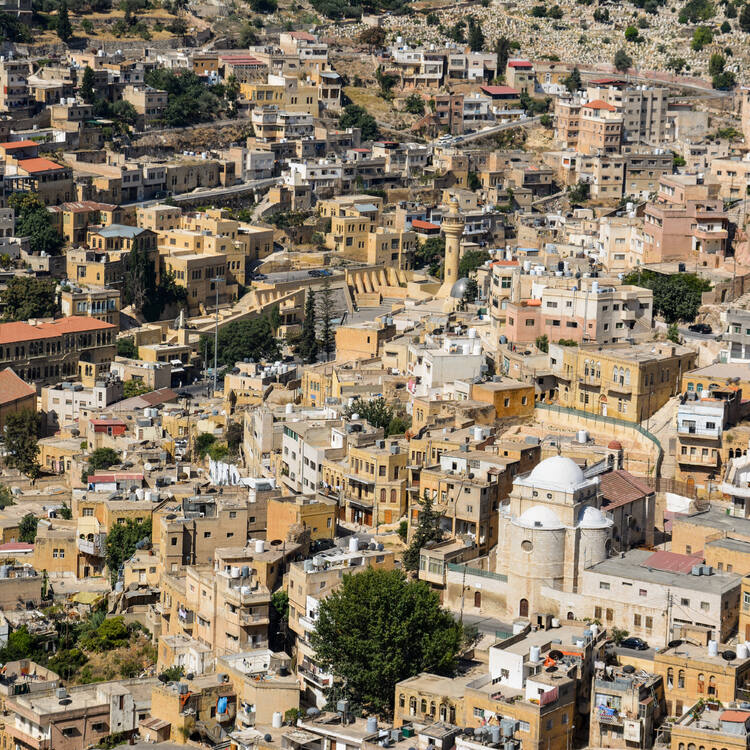 The city of As-Salt became the capital of Transjordan and a thriving trade centre during the late Ottoman period, experiencing a ‘Golden Age’ between the 1860s and the 1920s. The effects of the Ottoman ‘Tanzimat’ reforms brought enhanced security, administrative structures and trade. As-Salt became central to trade networks between the eastern steppe and the west, and grew in wealth through the arrival and settlement of merchants from Nablus, Syria, and Lebanon who made their fortunes on trade, banking, and farming. This prosperity attracted skilled craftsmen and As-Salt was transformed from a modest rural settlement into a thriving town with a distinctive townscape and architecture.

The city features large public buildings and private residences characterised by a central hallway and three bays, constructed of yellow limestone. These demonstrate a mix of vernacular and modern architectural influences, and skilful craftsmanship. Adapted to the steep folded topography, the urban morphology of the historic urban core is characterised by network of interlinked stairways, alleyways, public squares and spaces, and streets. The result is a dense urban fabric connecting the city’s resident neighbourhoods with public spaces and streets. These tangible characteristics have shaped the urban cultures of the city, including distinctive cultural traditions of tolerance between people of different cultural groups and religions. Muslim and Christian communities share many traditions, demonstrated by a lack of physical segregation between them. These traditions of hospitality are understood to reflect a fusion of local cultures and the incoming bourgeois traders during the ‘Golden Age’ of As-Salt’s development and include the social welfare system known as Takaful Ijtimai’ and the provision of hospitality in Madafas (guest houses, known locally as Dawaween).

The cultures of tolerance, hospitality, and social welfare practiced by the Bedouin peoples of the region were common throughout the area and have contributed to the construction of a modern Trans-Jordanian identity.

Criterion (ii): The historic centre of As-Salt demonstrates distinctive intercultural exchanges that resulted in transformations of the Levant in the late Ottoman period. These included flows of culture, people, skills, traditions and wealth within and between the cities of the region and beyond, and between diverse cultural and religious groups that comprised the urban population from the city’s ‘Golden Age’ to the present. These cultural exchanges involved the local Bedouin peoples, incoming merchants, craftspeople and traders, Ottoman officials and Christian missionaries. Together, the city’s architectural forms and building techniques, urban morphology, shared traditions and uses of public spaces, and the development of the places and practices of urban hospitality and mutual welfare demonstrate these intercultural exchanges. These are understood to represent a combination of local customs and new urban social norms.

Criterion (iii): As-Salt’s historic urban core is an exceptional example of the urban form and cultural traditions associated with the city’s ‘Golden Age’ period (1860s to 1920s). The city thrived and transformed as a result of the Ottoman Tanzimat reforms, demonstrated by the relatively intact urban fabric, stairways, and public spaces, as well as the large public buildings and private residences characterised by a central hallway and three bays, constructed of yellow stone. The urban form reflects and supports the traditions of joint habitation of Christian and Muslim communities, and specific forms of urban hospitality, many of which are continuing. As-Salt is distinctive in terms of its cultural practices of cooperation across religions and the absence of segregated neighbourhoods. Although these traits are not unique within the Levant, As-Salt is exceptional because of the intensity of these manifestations and the close connections between the cultural traditions and the urban fabric and forms. The particular urban tradition of providing Madafas (guest houses, also known as Dawaween) is an example of these characteristics, combining tangible and intangible attributes.

As-Salt demonstrates integrity in relation to the continuity of the historic urban fabric, including the historic buildings, landscape setting, the network and hierarchy of stairways that organise the vertical movement between lower and upper levels, the presence of open spaces that support a multi-faith society, and the residential and religious buildings. The property is of adequate size, and its boundary and buffer zone are appropriately delineated. The spirit and feeling of the place reside in both the tangible (buildings, houses, churches, mosques, Madafas, urban nodes, steps) and intangible attributes (close habitation of different cultural and religious groups, shared uses of public spaces, traditions of social welfare between neighbours). The integrity is vulnerable to development pressures and has been affected by intrusive buildings and empty plots within the urban fabric that affect the property’s visual and intangible qualities.

The historic urban centre of As-Salt meets the conditions of authenticity through the continuity of the different elements of the city’s architecture and urban morphology, and in the continuing aspects of the traditions of hospitality. The authenticity of the structure, materials, form, and design of the historic buildings and urban fabric is satisfactory despite development and adaptive reuse projects. The distinctive yellow stone distinguishes many historic buildings within the larger urban core, and the authenticity is supported by the retention of the networks of public spaces, alleyways, and stairways. The strong visual and topological contribution of the setting and the continuity of use of many of the public buildings and spaces are important aspects of the authenticity of the property.

Two national laws provide protection for the property. The Law of Architectural and Urban Protection (N°5, 2005) is the primary national law for the protection of cultural heritage in Jordan; the Cities, Villages and Buildings Planning Law (N° 79, 1966) provides for the establishment of planning authorities and processes, including the regulation of construction. Implementation of protection is provided through the City Core Special Regulations which were endorsed by the Ministry of Municipalities and Rural Affairs, the Higher City Planning Council of Jordan, and the As-Salt Greater Municipality in September 2014. These provide regulations for urban spaces, designation and grading of historic buildings, guidelines for conservation and new interventions, and guidelines for the design and enhancement of public spaces.

There is a long-standing commitment to the conservation of the tangible and intangible attributes of As-Salt through the efforts of the As-Salt Greater Municipality. The management system has been established, led by the As-Salt City Development Projects Unit, established in 2005 by the Municipality. The main mission of this office is to coordinate efforts for the safeguarding, conservation, and management of the historic city.

The Municipality is continuing a programme to fully document the attributes of Outstanding Universal Value and record their state of conservation. The Conservation Management Plan is a satisfactory beginning, and the establishment of regulations and guidance for change, alteration and conservation works are under preparation. Important conservation and adaptive reuse projects have been completed, and others are underway and/or planned. Site-specific conservation plans are being completed for twenty-two of the city’s historic buildings as a basis for their conservation or adaptive reuse. Many of the essential management strategies and tools are yet to be developed, and the incorporation of provisions for the intangible cultural heritage aspects require greater attention. Visitor management and interpretation are the subject of new and continuing projects. The development of the nomination and the ongoing management of the property have involved the city’s communities.