The Cathedral of Notre-Dame in Tournai was built in the first half of the 12th century. It is especially distinguished by a Romanesque nave of extraordinary dimensions, a wealth of sculpture on its capitals and a transept topped by five towers, all precursors of the Gothic style. The choir, rebuilt in the 13th century, is in the pure Gothic style. 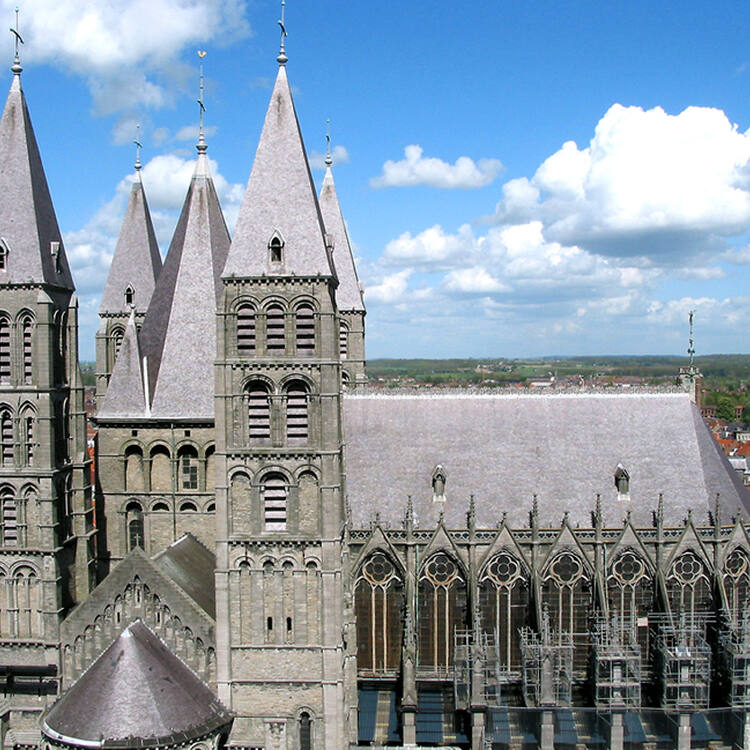 The Notre-Dame Cathedral in Tournai lies at the heart of the old city not far from the left bank of the Escaut. The present building is not homogeneous with regard to its chronology and conception, but the result of three coherent projects, completed and still distinguishable: the Romanesque nave and the transept, and the Gothic choir. The construction of the first two was for the greater part carried out in one go during the early 12th century; no major modification was made to the building during the following centuries, limiting its adaptations to the times.

It is difficult to associate the Cathedral with just one influence or school, but in its design and its elevations it presents layouts that influenced the development of early Gothic art. In particular, it is distinguished by a Romanesque nave of impressive dimensions and richly sculptured and by a transept with five towers that indicate the beginnings of Gothic art. The choir, rebuilt in the 13th century, is of pure Gothic style. The conception of the nave illustrates a great originality with several important innovations. The transposition to the exterior of the running course of the tall windows, the rise to four levels and the double western door make the nave a unicum in the history of Romanesque architecture, while the sobriety of the ornamental elements appears to be due to the weight of Carolingian traditions, particulary sensitive in the early Low Countries. The master builder has thus executed a remarkable synthesis between the most innovative aspects of the architecture of his time, although taking some liberties, and the local traditions.

The dimensions of the transept adorned with five towers, is surely the most emblematic characteristic of the Tournai Cathedral. Today, the sources are not sufficiently interpreted, between the so-called « Lombard-Rhine » influence and the harmonic façades of France and England. However, its posterity is evident; the model flourished throughout the second half of the 12th century. The Gothic choir marks the introduction of new forms of classic Gothic in Belgium in the middle of the 13th century. It is particularly representative of the era of its construction. It bears witness to the tremendous technological progress of the end of the 12th and beginning of the 13th century. It is also an example of the rapid spread of this architecture from the creative centres of Ile-de-France dating from the middle of the 13th century onwards. Indeed, it is a fashionable, « à la page » building using the most recent techniques and the embellishments in the taste of the time.

Criterion (ii): The Notre-Dame Cathedral in Tournai  bears witness to a considerable exchange of influence between the architectures of the Ile-de-France, the Rhineland and Normandy during the short period at the beginning of the 12th century that preceded the flowering of Gothic architecture.

Criterion (iv): In its imposing dimensions, the Notre-Dame Cathedral in Tournai is an outstanding example of the great edifices of the school of the north of the Seine, precursors of the vastness of the Gothic cathedrals.

Throughout the centuries, the Notre-Dame Cathedral in Tournai has preserved its architectural expression as well as its religious and cultural functions. Since its construction, it symbolises episcopal power. Its importance is expressed through the architectural quality of the building and its location in the urban fabric, veritable landmark in the centre of the urban landscape, as well as through its visual and symbolic relation to the nearby belfry.

The authenticity of the Notre-Dame Cathedral in Tournai is beyond doubt. The inevitable 19th century restorations (common to every major building of the Middle Ages) retained its outstanding external dimensions and the alterations to the west façade, minor in relation to the size of the building, are now part of its history. The damage caused by World War II bombardments was mainly limited to fire damage to the roof of the nave and to some of the chapter buildings. The restorations were carried out with the greatest respect for the building, as were the works ensuring the longevity of the Cathedral, now a fragile and aging building.

The Cathedral in Tournai was among the first listed properties in Belgium (05/02/1936), and it is inscribed on the list of outstanding heritage in Wallonia, a list established by the Walloon Government recording outstanding elements of the Walloon heritage. It is also located in the protected centre of old Tournai.

Since its inscription on the World Heritage List, the Cathedral has undergone an extensive restoration programme, spread over nearly 20 years, with the aim not only to restore the religious building, but also the promotion of the property and its buffer zone. The project associates all the actors and has a Scientific Committee.

Following the decision of the Walloon Government of 25 August 2011 to provide all the Walloon sites inscribed on the World Heritage List with a management plan, a Steering Committee, a Scientific Committee and a Management Committee were established.