The Historic Centre of Odesa 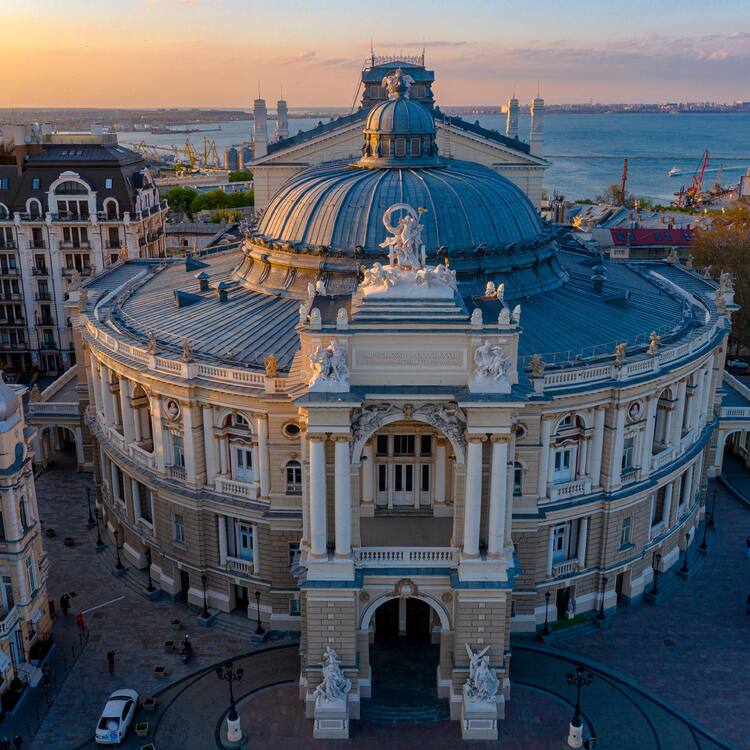 The historic centre of Odesa is part of a port city located on the Ukrainian shores of the Black Sea. It stands on a shallow indentation of the seacoast about thirty kilometres north of the Dniester River estuary. The city was founded in 1794 by a strategic decision of the Empress Catherine II to build a warm-water port following the conclusion of the Russo-Turkish war of 1787-1792.

The new city, built on the site of a Turkish fortress, was initially planned by a military engineer and then expanded further during the 19th century.

Odesa owes its character and rapid development during the 19th century to the success of its port, the favourable policies of its governors, and its status as a free port city from 1819 to 1859. Trade attracted many diverse people who formed multi-ethnic and multicultural communities, making Odesa a cosmopolitan city. Its pace of development, the wealth it generated and its multiculturalism all influenced its architectural expression and the variety of styles that still remain in the urban landscape. It has also caused tensions that, beginning in 1821, triggered a series of violent events.

The historic centre of Odesa is a grid system of spacious tree-lined streets divided into two rectangular blocks, the direction of which conformed to the orientation of two deep ravines cutting through the Odesa high plateau perpendicular to the sea. The city is characterised by relatively low-rise buildings. Designed by renowned architects and engineers, many from Italy in the early years, its theatres, religious buildings, schools, private palaces and tenement houses, clubs, hotels, banks, shopping centres, warehouses, stock exchanges, terminals and other public and administrative buildings represent both eclectic diversity in architectural styles and all the main activities of a trading city.

Prymorsky Boulevard, stretching along the edge of the plateau, Prymorsky Stairs coming down to the shore, and the ensemble of the Odesa Opera and Ballet Theatre, and the Palais-Royal are the main landmarks of the city.

While the urban planning and architectural quality represented in Odesa can also be found in other cities in the former Russian and Austro-Hungarian Empires, Odesa has preserved large areas of its historic fabric that reflect its rapid and prosperous development in the 19th century and its population which was far more diverse than in many other cities. Thus, Odesa, through its urban planning and built heritage as a reflection of many cultures, values, customs, social structures, and denominations, can be considered to stand out as a testimony to multicultural and multi-ethnic traditions of Eastern European cities of the 19th century.

Criterion (ii): The historic centre of Odesa represents an important interchange of human values within Eastern Europe through its heterogeneous architectural styles, developed during its rapid growth in the 19th century, that reflect the coexistence of many cultures and the combination of influences characteristic of the border area of Europe and Asia.

Criterion (iv): The historic centre of Odesa is an outstanding “time capsule” of the 19th‑century urban planning, with heterogeneous buildings mostly from the second half of the 19th century and the early 20th century, which reflects both the exceptionally fast growth of the town, based on the prosperity generated by the Industrial Revolution, and its notable diversity.

While the designed plan of Odesa evolved in certain respects as the city grew, its main outline remained unchanged. The grid structure and the linear connection with the port and the sea are retained and legible in the cityscape, and many of 19th-century buildings have survived. The modified boundaries matching those of the Integrated Protection Zone of the current General Plan of Odesa encompass all the necessary attributes expressing the Outstanding Universal Value.

The intactness of the city’s 19th- and early 20th‑century architecture, seems to be mainly satisfactory for the key buildings, but remains highly vulnerable due to the lack of adequate planning controls and inappropriate conservation. The integrity of the form and characteristics of the building quarters behind the main street facades, also appears highly vulnerable to modern infill and inadequate conservation. Given the emergency procedure and the lack of a mission to the site, at the moment of inscription an appropriate assessment of how well the integrity of individual buildings and group of buildings has been maintained is to be envisaged.

The key attributes of Outstanding Universal Value relate to the planned layout of the city, and its heterogeneous architecture that reflects the diversity of its multicultural trading communities. The modified boundaries matching those of the Integrated Protection Zone of the current General Plan of Odesa, encompass all the necessary attributes that convey the idea of a coherent city, developed rapidly during a period of exceptional economic growth and with buildings that reflect fully the intertwined social, cultural and architectural influences that prevailed.

Given the emergency procedure and the lack of a mission to the site, at the moment of inscription an appropriate assessment of the authenticity of individual buildings, their state of conservation, how their contexts have been respected, and how the new buildings developed during the last twenty years have impacted adversely on the overall authenticity of the urban ensemble is to be envisaged.

General provisions for cultural heritage protection are established by the Law of Ukraine on Cultural Heritage Protection adopted in 2000. The Ministry of Culture and Information Policy of Ukraine is the highest authority in the sphere of cultural heritage, acting on behalf of the Cabinet of Ministers. It formulates and implements state policy on cultural heritage and directs the activities of state institutions related to culture and art. The Ministry is responsible for supervising and monitoring the protection of historic monuments. At the municipal level, the Department of Cultural Heritage Protection of the Odesa City Council is responsible for the protection and conservation of cultural heritage sites in compliance with regulations on historic conservation in urban planning.

The property is protected according to the local regulations established in 2008 by the General Plan of Odesa.

The property is situated in the central zone, the most significant one in the city, where the main administrative, public, business, and cultural institutions are located. An Integrated Protection Zone was established. Its boundaries are delineated according to the current Historical and Architectural Reference Plan of Odesa, approved by the Order of the Ministry of Culture and Tourism of Ukraine and integrated into the General Plan of Odesa. Selected individual buildings and their complexes are listed in the State Register of Immovable Historical Monuments of Ukraine and protected in compliance with the Law of Ukraine on Cultural Heritage Protection as historic architectural monuments.

The enhancement of the management system is needed to cover all attributes and provide for coordinated management with supporting administrative tools and decision-making mechanisms. The management system should include detailed monitoring and conservation programmes, and an overall interpretation and presentation policy. Risk management should be included. 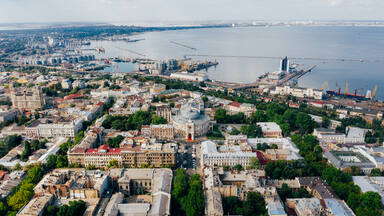