The List Benedictine Convent of St John at Müstair
Print

The Convent of Müstair, which stands in a valley in the Grisons, is a good example of Christian monastic renovation during the Carolingian period. It has Switzerland's greatest series of figurative murals, painted c. A.D. 800, along with Romanesque frescoes and stuccoes. 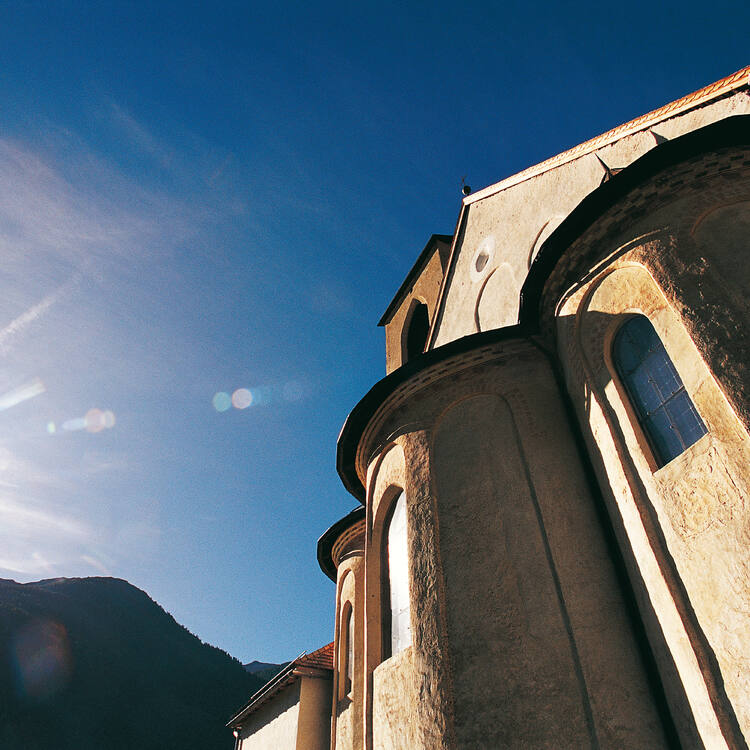 The Benedictine Convent of St John at Müstair, located in a valley of the Grisons in the extreme south-eastern part of Switzerland, south of the Alps, was founded around 775, probably on the orders of Charlemagne. At the beginning of the 9th century it was noted as being an establishment of religious Benedictines, and became a women’s abbey in the first half of the 12th century. Religious activities have continued uninterrupted until the present day, with the abbey becoming a priory in 1810. Today, the convent ensemble comprises the Carolingian conventual church and the Saint Cross Church, the residential tower of the Abbess von Planta, the ancient residence of the bishop, including two rectangular courtyards. To the west the courtyard is surrounded by cloisters, two entrance towers and agricultural buildings.

The property reflects both the history of its construction and the political and socio-economic relations in this region and throughout Europe over more than 1200 years, and thus provides a coherent example of Carolingian conventual architecture over time.

The conventual church houses the most important cycle of frescoes of the Carolingian era conserved in situ. The creation of these frescoes is dated  around the first half of the 9th century. The church, which is conserved for the most part in its Carolingian style, was initially destined as a space to be decorated with paintings: representations of the history of Christ decorate its entire perimeter, the apses and the inner walls. The scenes are laid out in a decorative way with elements connected by thematic and spatial correspondence and represent an outstanding example of Christian iconography.

Criterion (iii): The conventual ensemble is one of the most coherent architectural works of the Carolingian period and High Middle Ages, with the most extensive cycle of known paintings for the first half of the 9th century. The figurative paintings of the Roman era, and especially the Carolingian period, are particularly important for understanding the evolution of certain iconographic Christian themes, such as the Last Judgement.

The property comprises the entire monastic ensemble and the annex elements for agricultural exploitation located within the walls of the ensemble. The property includes all the requisite elements to express its Outstanding Universal Value.

Historical and archaeological researches have determined all the restoration work in strict respect of the original substance since the 1947-1951 campaign. The property fulfills the conditions of authenticity not only with regard to the material substance, but also from the functional perspective: the convent is still a religious centre for Benedictine sisters.

The property benefits from legal protection at all State levels and therefore benefits from the highest possible protection. Federal protection is inscribed in the land register and the competent authority of the Confederation must grant its approval for all work foreseen at the site. The Cantonal listing also ensures the conservation under the competent cantonal authority and forbids any demolition. The property is located in a protected zone in the local town plan for the commune. The boundaries of the property are located in a non-constructible zone and guarantee maintenance of the landscape values of the property.

The “Pro Kloster Müstair” Foundation that exists since 1968 is responsible for the management and conservation of the property. It comprises a foundation council, a directorate and a director. In particular, it establishes and implements the plans for conservation and archaeological research, as well as the funding, communication and development plans. It establishes the annual budget for the property and in its capacity as site manager, plans and controls maintenance and restoration work.

A convention between the Foundation and the Benedictine sisters regulates the management and coordination of the different needs and requests, concerning scientific and archaeological research, as well as maintenance of the ensemble, the religious function, agricultural exploitation and visitor expectations. Regular and close contact with the competent authorities at all State levels guarantees a use of the property that has conservation as its primary concern.